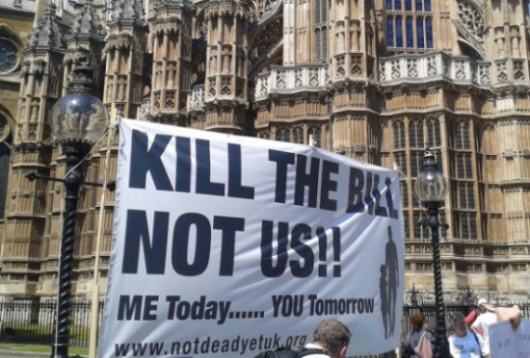 Among the many positive outcomes from the second reading of Lord Falconer's 'Assisted Dying' Bill was the steady stream of individuals sharing their personal reasons for opposing the Bill, from disabled and terminally ill people to carers and doctors. Here are just a few of the voices which have cried out against unethical, uncontrollable and unnecessary legal change.

We were among a number of newspapers and websites to publish the testimony of the late Christopher Jones, whose experience of despair when terminally ill caused him to reflect towards the end of his life on the valuable protection given him by the law; his widow Jenny shared her perspective in the Guardian alongside Dr Ian Basnett, who is tetraplegic. Similarly, we shared Matthew Schellhorn's account of caring for his terminally ill mother and his gladness at not having had to discuss the substance of Lord Falconer's Bill with her.

Disabled people, especially under the auspices of Not Dead Yet UK, have been at the forefront in recent weeks. The Times (£) interviewed 'Britain's best-known disabled actress', Liz Carr, who said 'some on my own medical team have underestimated my life expectancy. It is very common for someone with a disability to be told they are not likely to live until a certain age — and for them to carry on living.' Disabled blogger 'Spoonydoc' noted that few people acknowledge the inconsistency between supporting 'assisted dying' because of the experiences of people like Tony Nicklinson — who would not have qualified — and at the same time claiming that the Bill is closely defined and not open to extension. Hannah, who has inflammatory bowel disease, pursued a point also made by Spoonydoc: it is often wrongly assumed that those who oppose a change in the law have insufficient awareness or experience of these issues and would change their minds if they had.

In an engaging exchange, MND sufferer Pam and her friend Sian said that a 'choice' like 'assisted dying' would put people in a 'constant position of having to say no. What we need is support for living, not support for dying', while Penny Pepper, writing in the Guardian, challenged readers to consider how their reaction to her suicide bid at 19 changes when they know that she had suffered from a chronic illness since childhood. Colin Harte, who for many years acted as carer to his friend Alison Davis, spoke to ITV (1m13) on a similar theme, picking up on the weakness of prognoses and people's ability to find purpose, value and hope in life - endangered by Lord Falconer's Bill.

Paralympian and crossbench Peer Tanni Grey-Thompson featured across the media, including the BBC (video), New Statesman and Telegraph. She noted that despite her many successes, 'people come up to me and say "I wouldn't want to live if I was like you".'

Composer and fellow Peer Andrew Lloyd-Webber discussed the point at which his mother had expressed a will to die - convinced that she had become a burden - five years before eventually dying of cancer, and his own battle with depression during which he 'actually got the forms for Dignitas. With hindsight, it was stupid and ridiculous, but I couldn't think what to do.' Fellow member of the Lords and senior palliative care physician Ilora Finlay spoke about her and her mother's experience, similar to Lloyd-Webber's and doubtless to countless others around the country - her mother, four years before her death from breast cancer, considered herself to be a burden but with love and support, she rediscovered her own value and enjoyed 'among the best [years] of her long life'.

Caring for thousands of patients over a career will give healthcare professionals a unique insight into the reality of dying, but many will also have personal experience of serious health issues. As GP Dr Mark Houghton told the Yorkshire Post, 'I am in the strange position of being a doctor who has known what it's like to be made miserable - suicidal even - by chronic pain.' Baroness Hollins, past president of the British Medical Association and the Royal College of Psychiatrists, spoke in the course of a tour de force for the Daily Mail of a friend with motor neurone disease who confided to her shortly before death of how precious his final months had been - having said six months before that he would gladly take a legally prescribed drug.

Lady Hollins was writing in part as a counterpoint to former Archbishop of Canterbury Lord Carey's recently declared support for a change in the law, and his views were soon shown to be out of step with those of serving faith leaders. The Bishop of Worcester, John Inge, wrote movingly in the Guardian about his wife's battle with cancer which caused her death at the age of only 51, and explained why he was glad that the 'choice' of assisted suicide had not been available.

The chief rebuttal to Lord Carey came from current Archbishop of Canterbury Justin Welby, whose unambiguous denunciation in the Times (£) of legislation which would cause a 'sword of Damocles' to hang over seriously ill patients was in part informed by the deaths of both a friend and his own child. Archbishop Welby was one of 24 faith leaders to sign what was described as an 'unprecedented' message to Peers calling for the Bill's rejection.

Another signatory, Chief Rabbi Ephraim Mirvis, wrote in the Telegraph that while he appreciates 'the honest and empathetic intentions that have led Lord Falconer to propose, and others to support, the Assisted Dying Bill... Jews are particularly sensitive to the moral dangers of euphemism. We have seen prejudice cloaked in principle, bias masquerading as high-mindedness...'

Such concerns bring us full circle, back to those of disabled people who have been so prominent in speaking out against this Bill. Disabled inclusion activist Simon Stevens wrote in the Huffington Post that the Lords' handling of this issue and the weight they give to such proposals' flaws 'is a test to see how serious the country is in relation to the full inclusion of disabled people as equal citizens'. We agree, and we hope that people will continue to speak out in the months to come.

Watch vox pops from the rally in Westminster

Anthony Jarvis: Fri, 9 Jan 2015 20:00
I am a retired GP who is strongly against Lord Falconers Bill.
When I qualified, at the graduation ceremony I verbally agreed to the Hippocratic oath, and an oath is an oath for life and cannot be rescinded. All doctors have pledged to the oath likewise and therefore cannot kill patients under any circumstances.
If the law is passed, even under strict criteria, peoples confidence in the protections of their lives in our nation will be severely undermined. No new law could give full protection to its citizens and undoubtedly the 'slippery slope' would occur.
Lorna Murray: Wed, 7 Jan 2015 15:22
We have a daughter who has very serious special needs. Saying about assisted dying is totally wrong in our eyes as a couple. We believe very strongly that only God has the right to give and take life. Assisted suicide to us, is to much like Euthenesia the back door.
If you start that they could be doing it for every disabled person that comes through hospital doors, and that is totally wrong to do that. A Doctors and Consultants hypocratic oath part of it, is to save life, and that's what we should major upon in this country not even debating Assisted Dying.

Can you imagine how that family member or Doctor would feel.
Personally we would not EVEN THINK ABOUT it, or contemplate it. This should never be allowed as law in this country. Every body has a right to help and support, as much can be given.

We where told that we could never ever have a baby, no treatment nothing would be given at all. We asked people in our church to pray, and she is here. Naomi had as many as 10 fits in 1 day, and the hospital that we are now with Frimley Park Hospital in Surrey have been absolutely amazing with us, working to support u s as a family, and helping us to very much get Naomi through. We are so grateful for that.

We want to encourage people not to even think about voting for it to be come law in this country at all.
We believe very strongly that a disabled person, has the right to live, and also to be supported as much as possible in the Comunitty
Jane Hurst: Sun, 2 Nov 2014 20:43
I have read once again an article in the Sunday Times where the majority of the uk agree with assisted dying. Who are these people? Where are they? Are these people 'qualified' to make a judgement. As the daughter of a woman with Alzheimers there is not a day when I think my mother would be better off dead. Yes it can be difficult but then more input is required to make her smile and more patience is required to communicate with her. None of these are reason to kill her. My husband has an advanced cancer and under no circumstances does he agree with legalised killing. When first diagnosed he thought he would have no treatment. Down the line he wants every treatment going so, what happens if anyone 'changes their mind? Legalised killing must not become law in the UK. The articulate few must not get the law passed to make life easier for them at the expense of the vulnerable.
Dr Adrian Houghton: Wed, 6 Aug 2014 10:07
Thanks hugely for this great site uniting the British public against legalising killing. This fits with the majority views of my patients who for reasons of personal fears and their majority Christian or Muslim faith are deeply alarmed by this Bill brought by a minority of extremists.
susan fisher: Sun, 27 Jul 2014 21:50
Thank you and praise God for the voices that are being raised in society to preserve our rights to life. I stand with you in prayer that God will put an end to these unGodly attempts to subvert justice for the sake of all souls.