Falconer Bill: where we are now

Lord Falconer's Assisted Dying Bill received its second reading on Friday 18 July. Here's what you need to know as we look forward. 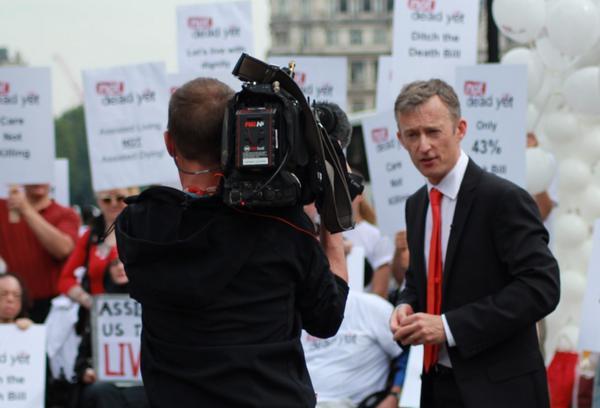 What led to the debate?

Lord Falconer's Bill, reintroduced in May 2014, is the first legislative attempt to allow assisted suicide since 2009 (Lord Falconer's proposed amendment to the now Coroners and Justice Act) and the first full bill since 2006 (Lord Joffe's Assisted Dying for the Terminally Ill Bill). Former Lord Chancellor Lord Falconer established a 'Commission' which reported in 2012 in favour of a change in the law, and the current Bill is heavily influenced by that report.

What does the Bill propose?

The Bill would permit the dispensing of lethal drugs to mentally competent adults deemed to six months or fewer to live. Among key issues with the Bill as drafted are the definitions used (e.g. terminal illness), assessment of mental capacity and the failure to require that the physicians know the patients. Read an assessment of the Bill by Professor John Keown of Georgetown University here.

How has opposition to the Bill been demonstrated?

Many thousands wrote to members of the House of Lords explaining their objections to the Bill, outlining the impact of their personal experiences and asking that Peers speak against the Bill. We know from speeches in the House on Friday that these have greatly encouraged Peers.

Key public figures and institutions restated their opposition to a change in the law, including (in just the few days beforehand) the Prime Minister, the Secretary of State for Health, the Royal College of Surgeons, the British Medical Association, disabled people's charities, religious leaders and major national newspapers (e.g. Guardian, Daily Telegraph and Daily Mail).

Personal testimonies have appeared across the media demonstrating why the current law is a valuable protection, and why a change in the law would be a great threat.

Polling, contrary to pro-change campaigners' claims of recent months, suggests that 70% of disabled people fear being put under pressure to end their lives should Lord Falconer's Bill be passed.

Hundreds of people rallied for some eleven hours with Not Dead Yet UK, supported by CNK, outside Parliament on the hottest day of the year, where they interacted with Parliamentarians and passers-by and demonstrated that theirs is not simply a no, but also a yes - to laws which protect us, medical innovation which supports us and a culture of care which affirms us. You can watch video comments from the rally at our YouTube channel, and find photos and comments on our Twitter feed.

What happened in the debate?

The debate lasted almost ten hours and featured 126 speakers who were very nearly evenly split between favouring and opposing the Bill. This even split reflects new ComRes polling released on the day of the debate which demonstrates that when those who support legal change are confronted with key 'practical considerations', support falls substantially, to 43/43 once those dissuaded by at least one factor are accounted for. A far cry from much-lauded claims of 80% support, the numbers were cited on the floor of the House by several peers.

You can read the debate here; Baroness Campbell of Surbiton's speech has been found especially powerful.

Why wasn't there a vote?

In line with a statement from key Peers in The Times (£) on Tuesday 15 July, those who opposed the principle of the Bill chose not to force a vote at the debate's conclusion.

The convention in the House of Lords is that a Private Member's Bill is granted an unopposed second reading. That the House didn't divide at the end of the second reading debate does not mean the Bill has the support of the House. The depth and strength of opposition is clear in the broad range of eminent speakers from a wealth of angles - law, medicine, ethics and disability - who deeply oppose the Bill but wish to respect the convention of the House

Peers on all sides of this debate also take the view that June's Supreme Court ruling requires thorough Parliamentary consideration. Important constitutional issues have been raised, concerning the deliberate taking of life. It is right to take the opportunity to discuss them. We are confident that such a debate will expose even more clearly the profound dangers for society in this deeply flawed Bill.

Given the strength of opposition to the Bill, and the limited time available in the last session before the election, it is very unlikely that this Bill will make progress through the House of Lords and will almost certainly not reach the House of Commons.

All the work which has gone into expressing public opposition has served to inform Peers' views and pronouncements, to demonstrate the breadth and depth of public opposition and to motivate and inform those who oppose uncontrollable, unethical and unnecessary legal change.

The Bill now goes to committee, although we understand that the Bill will not get to that stage until October or November.

Diana Neville: Sun, 27 Jul 2014 09:21
Thank you so much for a clear and succinct appraisal, and for all your hard work before the bill
Mike Holt: Sat, 26 Jul 2014 11:49
It's such a shame that we are forced to use humanitarian arguments to deal with a concern which has its roots in God. We all know that God is pro life, and abundantly at that.
I think your work is of the utmost value, and I thank you for it from the bottom of my heart.
Richard Atherton: Sat, 26 Jul 2014 10:48
Thank you so much for this helpful article, which helps to show that there is plenty of support still for the views of Not Dead Yet UK.
David Oliviere: Sat, 26 Jul 2014 06:53
Excellent and helpful summary, thanks.
Siabhan: Wed, 23 Jul 2014 03:01
As a former carer and Christian as in" MOST HUMAN RIGHTS OF ALL IS RIGHT TO LIFE" offer my full support of Campaign not dead yet against assisted dying bill at House of Lords and request the death bill stopped immediately.
There is no such thing as right to die, we will all die at some time and anyone seeking an control or time of death is incorrect and should be encouraged to put such notion out of their head, because it is depression and lack of courage. No one should be allowed to take another person life, there is plenty of good care and love, everyone should get nourishment and fluids pain relief until natural death.
PJ OHare: Wed, 23 Jul 2014 02:07
I am honoured to support campaign for dead not yet, because we love and value you all as our human family to get all good care, love, and not be pressured to end ones life.
I WII DO ALL I CAN TO HELP STOP ANY THREAT TO LIFE.
THE MOST HUMAN RIGHTS OF ALL IS RIGHT TO LIFE.
Joan OHare: Wed, 23 Jul 2014 01:35
I am deeply opposed to assisted dying bill, which is sending horror, and distress to me and many vulnerable people today.

There is no nothing more depressing for anyone sick that they could be pressurised to be killed by another person. indeed it will destroy trust, especially between Doctors and patients. LOVE, CARE, RESPECT ARE VALUES FOR EVERY LIFE UNTIL NATURAL DEATH
Patricia Chapman: Tue, 22 Jul 2014 16:24
Thank you so much for this helpful summary.
Dennis Queen: Tue, 22 Jul 2014 11:49
thanks for this fantastic piece explaining everything it is SO useful for us. thanks for working with us at Not Dead Yet UK! http://www.notdeadyetuk.org/
Please enable javascript to post comments!
Our Position »
Live Issues »
Scotland »
FAQs »
Get Involved »
Donate »