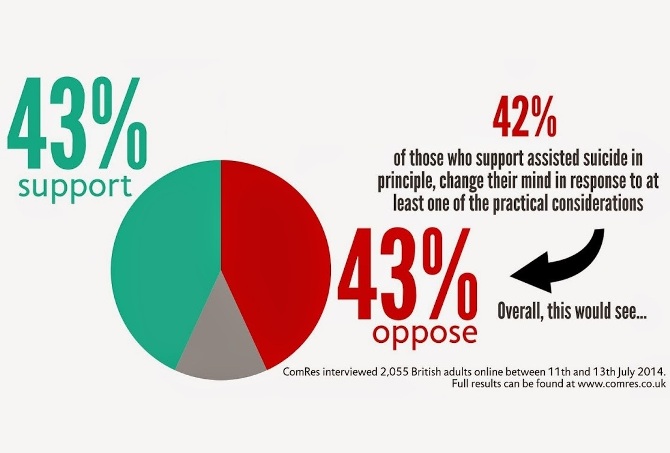 There is ample poll data showing that the majority of the British public support legalising assisted suicide (AS) in principle.

The former Voluntary Euthanasia Society (now rebranded Dignity in Dying) claims a figure of 80% although it has previously been argued that such levels of support are uncommitted, uninformed and unconvincing.

However, there has been very little poll data gauging public attitudes in light of the various empirical and rational arguments against AS. That is, until now.

An extraordinary new poll has demonstrated that public attitudes change dramatically once some of the key practical implications of AS are considered.

In a new Comres/CARE poll published today and reported by the Daily Telegraph respondents were presented with the following scenario:

'A new Bill is due to be debated in the House of Lords which is designed to enable mentally competent adults in the UK who are terminally ill, and who have declared a clear and settled intention to end their own life, to be provided with assistance to commit suicide by self-administering lethal drugs. Two doctors would need to countersign their declaration and be satisfied that the person has a condition which cannot be reversed by treatment and is reasonably expected to die within 6 months. In principle would you agree or disagree with this proposal?'

So far there's nothing that surprising. It would be odd for people not to be moved by some of the tragic stories of the 'hard cases' and to say they support a means of alleviating such suffering.

But then those who supported AS in principle were asked which of the following arguments would make them change their minds. Each statement below was randomised throughout the survey in order to assess which argument moved opinion the most.

The answers were truly astounding.

Overall 42% of those who originally supported the bill changed their mind on the basis of at least one of the arguments.

When these were added back into the original sample, aggregating all who opposed as a result of the arguments put to them, and incorporating all who still supported AS having heard each argument, they found the following:

So hearing the arguments against AS causes support for AS to collapse from 73% to 43% - that is, to less than half!

Here are the arguments with the percentage change each cause on those who initially backed Falconer's proposals.

1. The risk of people feeling pressurised into ending their life early so as not to be a financial or care burden on loved ones, as has happened in the US where more than six in ten of those requesting a lethal prescription in Washington State (where the law is similar to that proposed in the House of Lords debate) say that one of their reasons for doing so was not to be a burden on friends, family or caregivers

On hearing this 47% of those who originally backed Falconer's proposals would still do so, but 28% would oppose him and 25% did not know.

2. Changes in the law to allow assisted suicide and/or euthanasia in other countries like Belgium, the Netherlands and Switzerland have led to a steady annual increase in the number of cases and spread of the practice to involve people with chronic but not fatal diseases, disabled people, children and those with mental illnesses and dementia

3. Concerns that end-of-life care would be likely to worsen under financial pressures because it costs on average £3000 to £4000 a week to provide in-patient hospice care, but just a one-off cost of £5 to pay for the drugs which would help them commit suicide

4. All major disability rights advocacy groups in Britain oppose a change in the law to permit assisted suicide including Disability Rights UK, SCOPE, UK Disabled Person's Council and Not Dead Yet UK

Polls consistently show between 70% and 80% in support of AS. However, the issue is clearly far more complex than a simple 'support'/'oppose' question can do justice to. This polling strongly suggests that when offered evidence about the nature or source of opposition to AS, and some of the key arguments against it, this high level of support rapidly dwindles.

The most powerful argument in swaying the public was that changing the law would place pressure on vulnerable people to end their lives for fear of being a burden on friends, family or caregivers, as has been the experience in the US state of Washington and Oregon.

In short, support for AS looks to be extremely soft and generally uninformed. 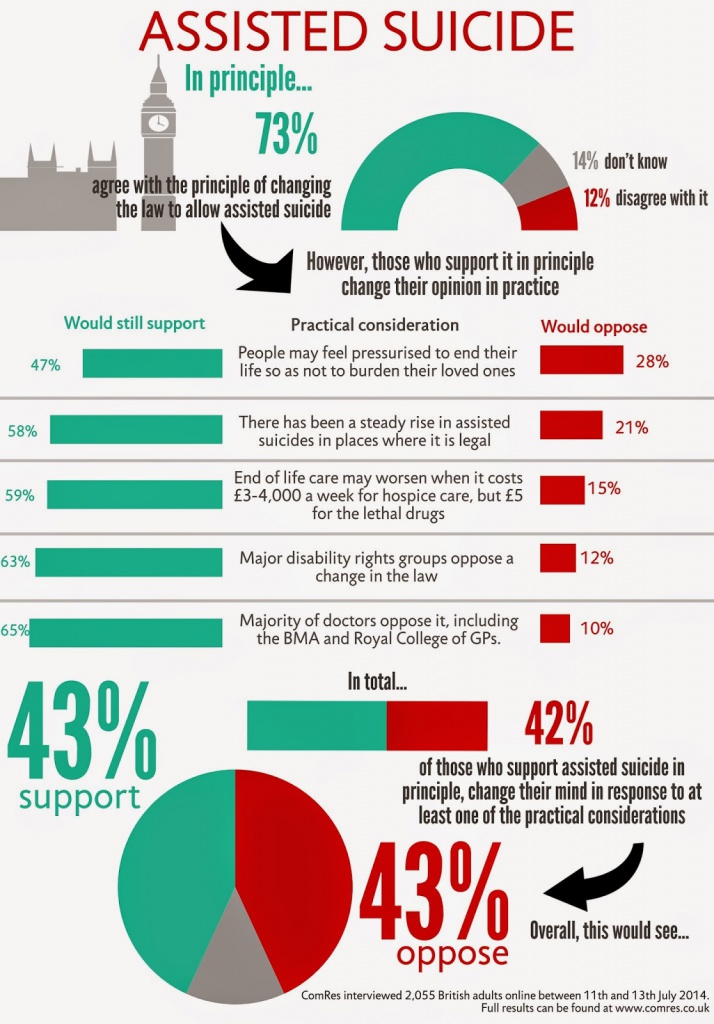 (METHODOLOGY: ComRes interviewed 2,055 British adults online between 11th and 13th July 2014. Data were weighted to be representative of all GB adults aged 18+. ComRes is a member of the British Polling Council and abides by its rules.)