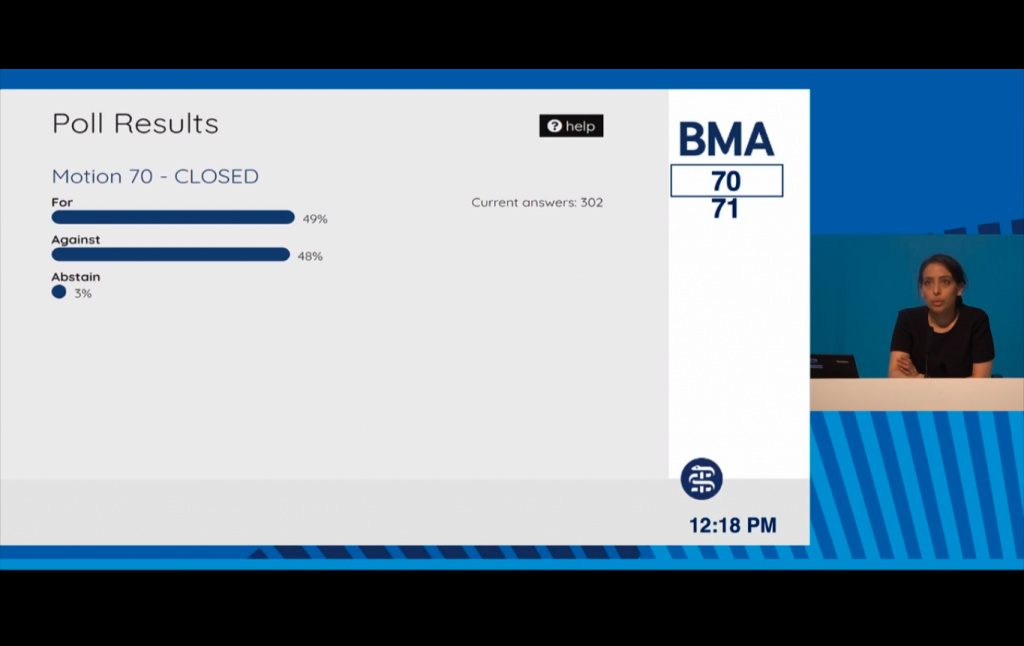 The British Medical Association briefly went neutral on assisted suicide in 2005, when major efforts were being made to legalise the practice via Lord Joffe's bill, but in 2006, the BMA threw out neutrality in favour of explicit opposition and the House of Lords threw out the bill. Opposition survived a 2016 vote, when neutrality was rejected by 198-115.

The BMA later followed the Royal Colleges of Physicians and General Practitioners in holding a membership survey on assisted suicide and euthanasia, practices it considered to be covered by the perpetually amorphous term, 'physician-assisted dying'.

The 2021 Annual Representative Meeting allowed for a one-hour 'special session with a facilitated discussion on the findings of the all-BMA member survey on physician-assisted dying carried out last year. This session will also begin to explore how we can best represent our members' professional interests and concerns in the event of future legislative proposals.' This was followed by debate on two motions.

70: That this meeting believes, in order to represent the diversity of opinion demonstrated in the survey of its membership, the British Medical Association should move to a position of neutrality on assisted dying including physician assisted dying.

You will observe that the language of the motion, in keeping with the BMA membership survey, necessarily includes euthanasia, which mainstream activists in the UK claim to reject.

Speaking against the motion, palliative care physician Dr Sarah Foot argued that not only had 18 months passed since the membership survey, but the experience of Covid had also challenged many understandings of healthcare and patient support, and that doctors' changed conceptions of their own role and abilities should be taken into account alongside an arguably dated set of survey results. Dr Adrian Farrell followed, discussing how euthanasia and assisted suicide laws in countries like Canada and the Netherlands had been or were being readied to be extended to children and those with mental illnesses, demonstrating how arbitrary and unreliable eligibility 'safeguards' were. Dr Lydia Akinola spoke of the 'callous disregard' shown to some of the most vulnerable members of society, including elderly people and those with disabilities, through cuts to support services and the failure to properly resource hospices and palliative care, deepening inequality and perceptions of being worth less.

Medical student Daniel Nie said that a key finding of the BMA membership survey had been the lack of willingness to be involved in assisted suicide and euthanasia (respondents wouldn't involve themselves in assisted suicide by 45-36, and euthanasia by 54-26), even among those who supported a change in the law. Dr Dom Whitehouse echoed hospice pioneer Cicely Saunders' mantra that 'you don't have to kill the patient in order to kill the pain', and noted that most requests for assisted suicide recede once patients are given access to appropriate, whole-person care.

The defining argument was made by Professor the Baroness Finlay, a palliative care expert and BMA Past-President. She explained that medical neutrality had been a necessary precursor to legalisation in Canada and said neutrality would suggest no objection to being licensed to prescribe or administer lethal drugs.

Of some 600 members of RB (Representative Body), only 302 cast a vote on the motion: 149 in favour of neutrality on assisted suicide and euthanasia, 145 against, 8 abstentions.

GP Dr Mark Pickering argued that requiring doctors with conscientious objections to actively refer patients to willing physicians - as required in Canada - would be an intolerable level of participation, and the proposer agreed to include the line only as a point of reference. Professor Wendy Savage, having declared several pro-assisted suicide affiliations, argued that merely not wanting to be involved in assisted suicide should not be understood as a fully fledged conscientious objection, and she argued against the suggestion that conscience rights should be extended 'to all health, care and administrative staff'; the proposer agreed with a different speaker that not to do so could incur significant moral harm and the line stood.

71: That this meeting calls for robust conscience rights to be included in any future legislation on assisted dying in the United Kingdom, believing that:-

i) the right of conscientious objection should apply to all health, care and administrative staff; Passed 79%-18%

ii) the right of conscientious objection should include the right to not prescribe lethal doses of medication; Passed 96%-3%

iii) a clinician with a conscientious objection should still provide a factual report to any decision making body if appropriate and relevant; Passed 72%-22%

iv) a clinician with a conscientious objection should still refer to another clinician to ensure appropriate access to care. Passed as a reference (not BMA policy) 69%-30%

Care Not Killing CEO Dr Gordon Macdonald responded to the shift in policy:

'We are naturally disappointed at the divisive nature of this vote… As the BMA's own survey found doctors at the coal face, who deliver care to the elderly and terminally ill, who work in Palliative Care, Geriatric Medicine and General Practice continue to oppose assisted suicide and euthanasia, because they know it is not needed and the subtle pressure it could put on patients to end their lives prematurely.'

'Our current laws protect vulnerable people and do not need changing, instead we need to refocus our attention on how to ensure we provide the very best palliative care to those who need it.'

His comments were carried by media outlets including The Times, The Daily Mail, The Independent, Sky News and Christian Today.