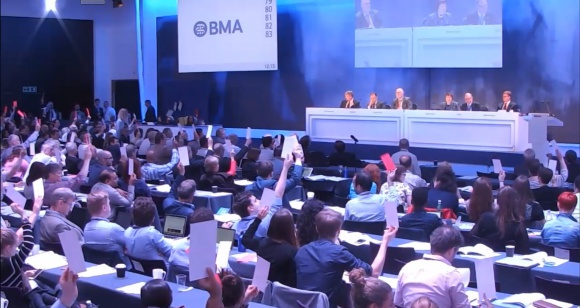 Motion 79 (EAST MIDLANDS REGIONAL COUNCIL) That this meeting, with respect to Physician Assisted Dying, notes the recent rejection by Parliaments of efforts to overturn the law on Physician-Assisted Dying and therefore feels that it is not appropriate at this time to debate whether or not to change existing BMA policy.

Motion 80 (SOUTH CENTRAL REGIONAL COUNCIL) That this meeting believes that the BMA should adopt a neutral stance on assisted dying.

Several speakers noted that BMA policy exists to represent the views and experience of members, so it was perhaps not entirely surprising that Motion 79, which reflected on MPs' conclusions, was lost - if only by three votes (164-161). Motion 80, however, was rejected after strong speeches by a resounding 198-115 - that's 63% to 37%, or more simply, 2-1. Members wishing to speak on Motion 80 were similarly split, with those opposed to neutrality outnumbering those in favour by 2-1. Thus, the BMA remains opposed to assisted suicide, as it has throughout its history (barring a brief period in 2005-6).

In the few days before the debate, in the time when delegates were packing for, travelling to and beginning to engage with the ARM, 5,000 members of the public thanked the BMA for its long-standing position and urged them to retain this stance. Individual activists made clear its value in their own lives:

@TheBMA Please protect lives and resist neutrality on assisted dying. We look to you for #supportnotsuicide. Thank you. PLS patient.

Campaigners in favour of assisted suicide - who had driven the calls for change at the ARM after they failed to convince MPs - spoke of a failure by the BMA to allow debate on the subject. Dr Mark Porter, the Chair of Council gave this short shrift. He noted that the debate marked the eighth time in 13 years that the BMA had considered the matter, and stated that 'nobody can credibly say this issue has been suppressed, obfuscated...' Dr Andrew Mowat, who moved Motion 79 went further, describing the constant returns to the issue as a 'neverendum'; Dr Gary Wannan simply mused, 'we've been here before...'

Many doctors spoke to the substance of the case against assisted suicide, especially foreign precedents. Professor the Baroness Finlay and Dr Will Sapwell highlighted, respectively, doctor-shopping and the increasing citation of not wishing to be a burden as a reason for assisted suicide in the US state of Oregon. Dr Sapwell also pointed to extensions of Belgium's euthanasia law, and medical student Heather Davis said that the Netherlands, with a healthcare system much like the UK's, had seen euthanasia numbers rise and eligibility extended as far as a young woman who suffered from PTSD as a result of sexual abuse. Closer to home, Baroness Finlay said that UK doctors were still strongly opposed to actually assisting suicides.

Ultimately, much rested on the meaning of 'neutrality'. Advocates said that by not taking a stance, the BMA could speak on the basis of the evidence while not excluding any members who are in favour. Quite apart from the fact that policy in opposition to assisted suicide is evidence-based, Baroness Hollins rightly commented that the BMA would never have any policies if all sides were always given equal weight. Dr Kevin O'Kane asked: why would the BMA go neutral on whether doctors can help kill their patients? He described neutrality as 'facilitative'; Dr Pickering said it wasn't about choosing neutrality, but being neutralised and would be read as dropping opposition; and Baroness Finlay said it would be perceived as doctors actively changing their minds on assisted suicide.

Dr Mowat was clearest of all though: a move to medical neutrality would indicate acceptance or indifference to assisted suicide, and where doctors have surrendered their opposition abroad, it removed a major obstacle to legislation.

A medical student who spoke towards the end of the debate said that she entered medicine to care for and value the lives of patients, not to arbitrarily agree that some lives are not worth living. Judging by the scale of the ARM's rejection of neutrality, she spoke for the majority - and we are glad. Once again, doctors - including those working most closely with dying people - have reflected on their experience and the reasons they dedicate their lives to care, healing and support, and have once again told their chief representative body to oppose uncontrollable, unethical and unnecessary legal change in their name.