Support ebbs ahead of bill debate

Care Not Killing's campaign against the Assisted Suicide (Scotland) Bill has been prominent in the news ahead of debate in Holyrood. Popular support is faltering, more than 15,000 have supported CNK's petition and opposition among MSPs is strong 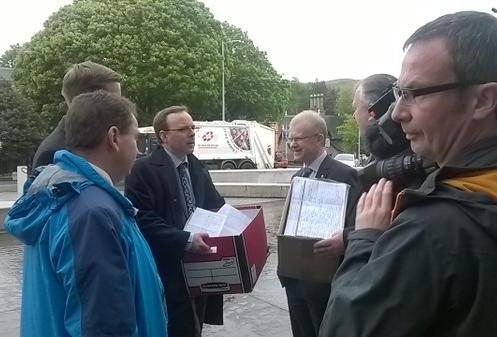 Members of the Scottish Parliament will debate the merits of the Assisted Suicide (Scotland) Bill, introduced by the late Margo MacDonald and carried forward by Green MSP Patrick Harvie, on 27 May 2015. A similar measure was rejected by the last parliament in 2010, by a margin of 85-16, but faced with heightened efforts on the part of proponents and increased discussion of the issue thanks to moves in Westminster and the courts, Care Not Killing has been working hard to make the case against legal change which would be uncontrollable, unethical and unnecessary.

The Times reported that 'support for the law change is ebbing away' ('Assisted suicide bill in doubt', 24 May 2015):

The findings of the poll by Orb International, commissioned by the umbrella campaign group Care Not Killing Scotland, indicate that support for assisted suicide among Scots voters falls significantly, from 73% to 45%, when asked to consider detailed arguments against the idea.

The poll of 1,044 adults in Scotland suggests a big concern is the risk that people would feel pressured into ending their life early so as not to be a financial or care burden on loved ones.

Opponents of assisted suicide say more than six out of 10 of those requesting a lethal prescription in Washington state said one reason was to avoid burdening friends, family or carers. The poll showed 22% of those backing assisted suicide changed their minds when presented with this scenario.

At the same time, 23% dropped their support when told changes in the law to allow assisted suicide or euthanasia in other countries such as Belgium, the Netherlands and Switzerland had led to the death of people with chronic but not fatal diseases, disabled people and children as well as those with mental illnesses and dementia.

The Times noted the perhaps surprising failure of celebrity endorsements to shore up public support, with the Health and Sport Committee's critical report on the Bill apparently being taken more seriously:

Despite the public support, including celebrities such as comedian Elaine C Smith and crime authors Ian Rankin and Chris Brookmyre, the bill is facing defeat after Holyrood's health committee warned that vulnerable patients could be at risk and that the "risk of coercion can never be eliminated completely".

A report by the committee, dominated by Scottish National party (SNP) members, also warned that the legislation risked "normalising suicide and seeming to endorse it" and of the dangers of "lethal doses of drugs being dispensed into the community in an uncontrolled manner".

Gordon Macdonald, convenor of Care Not Killing Scotland, said: "This is a highly emotive subject and attracts strong views on both sides. But it is clear that when presented with all the facts and given a chance to consider the issues at stake along with the core arguments that are involved, growing numbers see the very real dangers assisted suicide presents.

The Herald ('MSPs set to reject plan to permit assisted suicide, campaigners claim', 25 May) reported on indications of how Parliamentarians are minded to approach the issue, and indeed how they look set to vote:

CAMPAIGNERS are confident MSPs will reject plans to permit assisted suicide in Scotland when proposed legislation faces a crunch Holyrood vote on Wednesday. Care Not Killing, an umbrella body for groups opposed to the controversial move, believes between two thirds and three quarters of MSPs will vote to block the Assisted Suicide Bill.

Care Not Killing claimed 65-75 per cent of MSPs were poised to vote against the legislation, based on their past public statements. The group included First Minister Nicola Sturgeon in a list of 59 MSPs opposed to the Bill, after she said earlier this year she was "not convinced" by the move. A further 17 MSPs are "minded" to vote against, the group said, with 30 either definitely in favour or inclined to support the legislation. The group estimates 21 MSPs are undecided.

Dr Gordon Macdonald, convenor of Care Not Killing, said: "We are extremely hopeful that the Bill will be comprehensively rejected by MSPs on Wednesday but we don't want to pre-judge anything and will await the decision of the MSPs.

"This has been a long, arduous and highly-charged campaign with powerful arguments being made.

"However, we have said along that assisted suicide is unnecessary, unethical and uncontrollable and that this Bill is flawed in principle."

THE spiritual leaders of Scotland's 80,000-strong Muslim community have written to MSPs urging them to oppose controversial proposals to legalise assisted suicide ahead of a vote on the issue.

The Council of Imams Scotland, besides noting that suicide is prohibited under Islamic law, join so many other voices in concluding that

assisted suicide will put vulnerable people at risk, subject them to physical and mental coercion and lead to "incremental extension" and "mission creep", fearing some practitioners will extend the categories of those who could be eligible for assisted suicide.

The current law is completely inadequate. There is a complete lack of clarity.

We would direct him to the unequivocal and repeated assertions to the contrary by Scotland's chief law officer, the Rt Hon Frank Mulholland QC. The public discourse in the run-up to the first-stage debate is one Scotland can rightly be proud of, and we hope that MSPs will follow their constituents' lead in rejecting celebrity endorsements and slogans, looking rather to proven experience, expert opinion - in short, the evidence. The Assisted Suicide (Scotland) Bill, made law, would be uncontrollable, unethical and unnecessary, and in the words of CNK Scotland Convenor Dr Gordon Macdonald,

This Bill needs to be put in the bin...This bill is so full of holes that it really needs to be dismissed at Stage One.