In a free vote at Holyrood, MSPs have thrown out the Assisted Suicide (Scotland) Bill at Stage One by 82 votes to 36, in a clear repudiation of the principles of the Bill 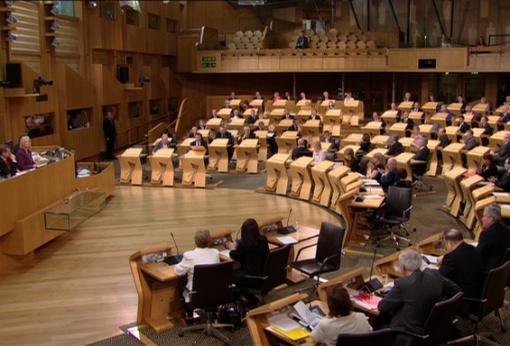 Members of the Scottish Parliament (pictured at the debate's close) have today voted down Patrick Harvie's Assisted Suicide (Scotland) Bill, first introduced in 2013 by the late Margo MacDonald. This result comes less than five years after the last Parliament threw out the End of Life Assistance Bill, and is a clear signal from the Scottish people's elected representatives that they will not imperil the place of vulnerable people in society. Contributions to this afternoon's debate highlighted the significance of the proposals for disabled people and queried the woeful 'safeguards' suggested by the Bill's proponents.

The Bill would have provided for licensed facilitators to assist the suicides of persons over the age of 16 with an illness or progressive condition that is, for them, terminal or life shortening (no time-limit). Criticised by individuals and organisation from a broad range of experience, the deeply flawed proposals failed to find favour when the Health and Sport Committee took evidence.

After the vote, Dr Gordon Macdonald, convenor of Care Not Killing in Scotland, described the vote as 'a bold and critical step which marks a major victory for the vulnerable in our society'.

In every free democratic society there are limits placed on human freedom in order to protect the common good and vulnerable people. It is right that the law is not to be changed to accommodate the wishes of a small number of desperate and determined people at the expense of the rights of others.

Vulnerable people who are sick, elderly or disabled can so easily feel pressure, whether real or imagined, to end their lives so as not to be a burden on others. Parliament's first responsibility is to protect the vulnerable and that is what has happened.

The work of CNK will continue in time to come as we emphasise the importance of palliative care - because the pro-euthanasia lobby is not going to give up.

That is why we must remain ever vigilant and on alert to challenge and debunk their dark and deathly propaganda which offers a vision of the future which has no place in Scottish civilised society.

The right to die can so easily become the duty to die and vulnerable people who are sick, elderly or disabled will inevitably feel pressure, whether real or imagined, to end their lives so as not to be a burden on others. The stories of incremental extension presently coming out of Belgium and the Netherlands give a stark warning about the dangers of going down this road.

Killing can never be the right answer in a civilised society. History teaches us the importance of protecting every human life. We must ensure the frail, disabled and sick are not put at risk for the sake of a small minority determined to end their lives.

Care Not Killing thanks all those who have worked with us and alongside us to defeat these proposals.