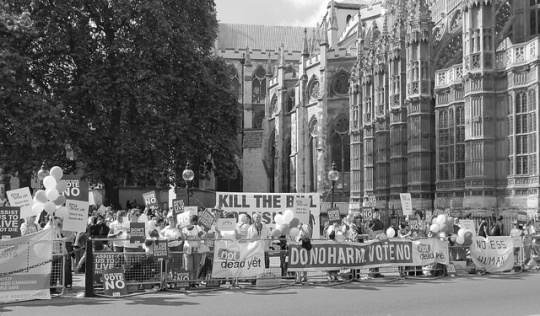 The UK's leading alliance opposing the legalisation of assisted suicide and euthanasia today marks the anniversary of the overwhelming defeat of the last attempt change the law and affirmed that the current law is clear and safe and does not need changing.

Rob Marris's Assisted Dying (No 2) Bill sought to legalise assisted suicide (but not euthanasia) for mentally competent adults (18+) with less than six months to live subject to 'safeguards' under a two doctors' signature model similar to the Abortion Act 1967, and with High Court approval.

The proposals, based on the laws of Oregon and Washington in the USA, were opposed by healthcare professionals, including representative bodies like the Association for Palliative Medicine, the British Geriatric Society, the British Medical Association and the Royal College of General Practitioners; and by disability campaigners including Not Dead Yet UK and Scope. Crossbench peer and disability campaigner Baroness Campbell of Surbiton said of such proposals:


The existing law on assisted suicide rests on a natural frontier. It rests on the principle that we do not involve ourselves in deliberately bringing about the deaths of other people. What the proponents of "assisted dying" want is to replace that clear and bright line with an arbitrary and permeable one. At the moment they say they want assisted suicide for people who are terminally ill, but for how long will that last, and who decides what is terminal? If terminal illness, why not chronic and progressive conditions? And, if chronic and progressive conditions, why not seriously disabled people? I am already on the list.

Across the summer ahead of the debate, Care Not Killing (which was founded in 2006 to fight Lord Joffe's Assisted Dying for the Terminally Ill Bill) encouraged thousands of people across the country to contact their MPs, by e-mail, letter, phone, in personal meetings or at public meetings, and the debate featured many examples of MPs personal stories of the viewpoints of those they represented. Key speeches in the debate came from healthcare professionals including Dr Philippa Whitford and Dr Sarah Wollaston, who reflected on their own experience of treating and caring for sick and dying people, and MPs like Ben Howlett freely admitted to changing their minds on the day, such was the quality of debate.


'Last year's debate was spectacularly attended for a Friday sitting and featured passionate speeches which changed minds in the chamber. MPs voted overwhelmingly by a 3-1 margin against this dangerous piece of legislation. This vote followed similar outcomes in the House of Lords (2006 and 2009) and Scotland (2010 and 2015), and a number of advocates later conceded that the weight of the Marris Bill's rejection settled the matter for the remainder of the 2015 Parliament.

'MPs witnessed mission creep in the tiny number of places that have changed the law to allow assisted suicide and euthanasia - countries like Belgium, the Netherlands and the American state of Oregon.

'In Belgium, which introduced a law to help terminally ill mentally competent adults, we have seen the case of Mark and Eddy Verbessem, the 45-year-old deaf identical twins, who were euthanized in Belgium, after their eyesight began to fail. Or Nathan/Nancy Verhelst, whose life was ended in front of TV cameras, after a series of botched gender reassignments. Or the case of Ann G, an anorexia sufferer who opted to have her life ended after being sexually abused by the psychiatrist who was supposed to be treating her for the life-threatening condition. Both Belgium and Holland subsequently extended their law to include non-mentally competent children.

'In Oregon which is the model for this piece of legislation, the number of assisted suicides has increased dramatically since its introduction. At the same time, because of health care rationing, we have seen patients suffering from cancer refused potentially life-saving and life-extending treatments, while being offered lethal cocktails of drugs to kill themselves with.

'Since British MPs rejected assisted suicide, figures for Washington state show that the three main reasons for seeking euthanasia remain existential in nature and a majority of deaths still involve not wanting to be a burden, while an increasing proportion of 'participants' cite concerns about the financial implications. Washington also saw its youngest yet assisted suicide participant - a 20 year old - in 2015, and we see the doctor-patient relationships upon which these decisions are based shrinking in length, as the overall numbers of assisted suicides rise. An Oregon study found nearly one in six of those using the law were suffering from treatable clinical depression. This is what MPs rejected.'


'The current law exists to protect those who are sick, elderly, depressed, or disabled from feeling under pressure to end their lives. It protects those who have no voice against exploitation and coercion. It acts as a powerful deterrent to would-be abusers and does not need changing.

'We hope Parliament will now turn its attention to the real issues facing our country of ensuring that everybody can access the very best care, regardless of whether they are disabled or terminally ill and that we fund this adequately.'


'A year ago Parliament decisively rejected assisted suicide. After a long public campaign and extensive debate in the House of Commons, MPs concluded that the proposals were unethical, uncontrollable and unnecessary. The rejection of the Marris Bill was a victory for the many seriously ill and disabled people who feared the consequences of its enactment. The focus must now be on constantly improving access to and the quality of palliative care and support, so that vulnerable people may both live and die naturally with dignity.'

Parliamentary rejections of the legalisation on assisted suicide and euthanasia: