Stuck in the past?

All campaigning organisations have back-stocks of material to use up, but assisted suicide advocates' recent revival of an old publication raises some pointed questions 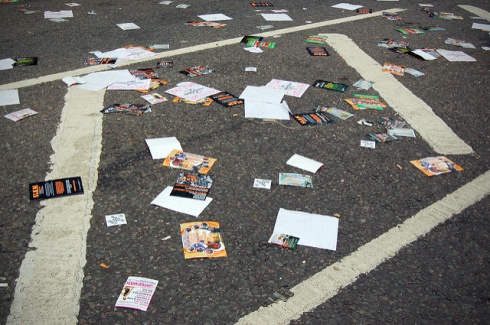 'By the time you read this I will have been assisted to die in Switzerland...'

This is how Dignity in Dying (DiD) quotes the late Geraldine McClelland on a leaflet distributed in the British Medical Journal and other magazines earlier this month. It is true that Geraldine is now dead. The implication for readers, however, is that her journey has only just been made when she actually died five years ago, in December 2011. DiD clearly invested a huge amount of money in leaflets in 2011 and want to use them up.

The DiD leaflet also features Sir Terry Pratchett, who died eighteen months ago, and Debbie Purdy, who died two years ago. That they have died is not an issue but it is interesting that they are digging up old cases to create a sense of immediacy for their campaign whilst not being clear that most of these people are already dead.

The reality is that DiD's campaign, like some of the people depicted in their leaflet, is showing few signs of life. They have lost time and time again in Parliament and the courts with their tired arguments but are trying to create the impression that their movement is in full swing.

One of the biggest problems with campaigners using old material is that their claims are affected by events. If Care Not Killing continued to use a leaflet produced after the House of Lords rejected the Joffe Bill in 2006, saying that Parliamentarians continued to reject assisted suicide legislation, that would still be valid. The DiD leaflet we have before us, however, is now hopelessly outdated. They take as an indication of MPs' views their consideration of the DPP's guidelines on assisted suicide prosecutions, and tell readers that 'in 2012, following a major Parliamentary lobbying campaign by our supporters, we secured unanimous backing from MPs for this policy.'

This does not reflect MPs' subsequent September 2015 rejection of Rob Marris's Assisted Dying Bill by a massive 330-118. DiD claimed after the vote that the debate was insufficient - we wonder if they would have said the same had the vote been otherwise, but no matter. After months spent hearing from constituents, experts and interest groups, MPs turned up in exceptional numbers for a Friday sitting and, after an informed and persuasive debate, rejected Dignity in Dying's proposals (and those they were: when Mr Marris first published his bill - not, as is usual, on the Parliamentary website before the summer recess but during it, at Politics Home - the documents listed DiD staff members as authors).

Even had the DiD leaflet been printed more recently, we don't suppose it would have mentioned the Welsh Assembly voting down the principles of Lord Falconer's failed Lords bill in 2014, nor the Scottish Parliament's 82-36 rejection of the Assisted Suicide (Scotland) Bill last Spring.

Elected representatives, when presented with the evidence, continue to reject proposals which devalue and endanger the lives of their constituents. Perhaps our counterparts continue to use old material because they don't wish to acknowledge this. They didn't refer to foreign practice then and we don't suppose they'd find it any easier to do so now. They probably don't want to acknowledge the extension - since the 2011 leaflet - of clearly delineated euthanasia laws by our near neighbours Belgium and the Netherlands.

It is worth noting that Debbie Purdy died in a hospice, with the UK's world-leading care and support allowing 'her last year to be as peaceful and dignified as she wished.' Sir Terry Pratchett 'died peacefully in his own bed, his cat at his side.' Said Judith Woods in The Telegraph:

'This final image of him surrounded by his loving family is deeply moving in its peacefulness. It is the passing most of us would wish for - with the requisite painkilling drugs, please - yet it is becoming almost vanishingly rare as death becomes increasingly medicalised.'

The fact is, despite DiD's scaremongering, when given care that addresses their physical, social, psychological and spiritual needs, the overwhelming majority of people in this country die comfortably and well and do not want to end their lives prematurely - including DiD's own campaigners.

Proponents of so-called 'assisted dying' have created a culture in which supporters fear a dignified death is impossible unless they can take it into their own hands. What they refer to as 'choice' however, is in fact the end of choice. In 'Geraldine's Story', we are told Geraldine wanted 'my life to end with me still in control of it.' Regardless of the fact that no life is lived entirely without the influence and support of others, the wording is simply disingenuous. What is really meant is, 'life to end when I choose to end it.' There is an obvious tension between the claims of proponents that they would wish to go on living and don't want to die - and yet that is what they fight for the right to. They can hardly bear to say it.

Again, we are told of Geraldine's anger 'that I can't die in the country I was born in, in my own home, with my loved ones by my side.' But she had that right, as did Terry Pratchett, as do we all. We couldn't even correct the statement by replacing die with 'kill myself' or 'end my own life', because that has also been legal - if still terribly sad - since 1961. What she means is that she hadn't the right to kill herself with the assistance of others - but that wouldn't have scanned as well, hence also the awkward wording of the front page quote ('assisted to die').

While these are clumsy attempts to muddy the water, DiD's claim that 'under UK law you have no right at the end of life to control the manner or time of your death' is simply not true. Palliative care and support can be provided in hospitals, hospices, nursing and residential homes and in patients' own homes, with pain relief available - it is worth noting that where assisted suicide is legal, insufficient pain relief is only cited in a minority of cases. Families can gather round and share all the time remaining, and the patient is perfectly able to refuse life-saving or extending treatment, including where these are aggressive and have an impact on quality of life. The only 'right' not granted in law is the right to have someone facilitate your suicide.

DiD should have the courage to say this without deliberate obfuscation.

Sadly, instead of telling the whole truth clearly and plainly, they are seeking to advance their campaign by creating false impressions, ignoring historical facts, scaremongering about the dying process, employing specious euphemisms and recycling old arguments and old literature. These are signs of desperation and evidence of a campaign which has lost its way. It's time to pack up and go home.