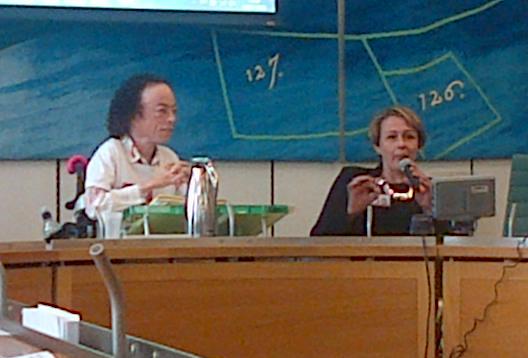 Mr Marris wants to give adults who are terminally ill and mentally competent the 'right' to have assistance to kill themselves using lethal drugs on the say-so of two doctors and one high court judge. The bill is due to have its second reading on 11 September. (Have you contacted your MP?)

They later visited No 10 Downing Street to hand a letter to the Prime Minister.

A summary of Liz Carr's speech

We shouldn't be fooled by the term 'assisted dying'. This is assisted suicide. So let's call it what it actually is. It's about people having help to kill themselves.

The former name of Dignity in Dying (DiD), the organisation pushing this bill, is the 'Voluntary Euthanasia Society'. They will use any euphemism to disguise the facts and their wider agenda.

Their main weapons are misinformation, emotion and fear - fear about pain, dependence and disability. So we have to fight this fear with facts and truth.

Is there anyone in this room who wouldn't prefer a pain-free death with dignity? Of course not. We all want that. But this law is not the way to achieve it.

Assisted suicide is not about having a painless and pleasant death either. The drugs are unpleasant and they often do not work quickly. Far better to be in the hands of a doctor trained in good palliative care who can relieve your symptoms properly.

We are being cast as uncompassionate for opposing this bill. But we are not the people who lack compassion. We understand what it is like to suffer and to have limited options.

I'm able to speak here today because I am loud, articulate and have been on telly. But I speak on behalf of many who are unable to speak in their own defence - vulnerable and disabled people who don't have access to the drugs, housing , social care, support and choice they would like. DiD talk about having choice, but I speak for people who do not have a real choice.

The proponents of this bill are offering a very narrow choice indeed to a very limited number of people.

If DiD really believe in compassion then why don't they use some of their millions of pounds of resources to ensure that everyone who is vulnerable or dying has good care and support rather than being steered toward suicide?

Anyone can have worth and dignity if they have proper care and support.

The term 'right to die' is rubbish. We are all going to die. What is really being talked about here is the right to be killed, something altogether different.

Suicide is already legal and everyone who is serious enough about it is already able to kill themselves. But this bill is about people who want someone else to do it for them. It's about socially approved suicide. It's about making suicide socially acceptable when it is actually something we should be trying to prevent.

Anyone can already kill themselves without assistance - by simply stopping eating, taking an overdose or even driving their wheelchair down the stairs. I'm using these examples to make a point - not suggesting that anyone do it. But the point is, why then do we need to change the law to allow people to be assisted to do what they can already do without assistance?

This bill wouldn't actually help the tiny number of people like Tony Nicklinson who are unable to kill themselves. We will then be told that it is cruel to discriminate against these people and that we should legalise euthanasia as well.

We hear a lot about the term 'slippery slope'. I don't use this term because this widening of the law we see in every country that has legalised it is not a passive process. It's much more accurate to call it 'incremental extension'.

Let's have no illusions about the wider agenda. I was in Luxembourg just after they changed the law. The MPs who were pushing for it wanted it for children and elderly people with dementia as well. But they knew they wouldn't get it so they went for the softer target of the terminally ill.

It is no different here. DiD say it is only for mentally competent adults with less than six months to live but think about the people they are using to make their case - Tony Nicklinson, Debbie Purdy, Jeffrey Spector, Paul Lamb, Terry Pratchett. Not one of them actually fits with their definition - none actually terminally ill.

But through these cases they are softening up public opinion for a much bigger legal change.

So why do we have one law for one group and another law for the other? This is really just discrimination. It's saying that it is good for people who are terminally ill to kill themselves - but bad for younger people with mental illness to do so.

But we can't on the one hand push for suicide prevention for one group of people and encourage suicide for another group. This is a dangerous and confusing mixed message.

And just how workable will this law be in practice? Two doctors are supposed to assess whether a given patient has mental capacity, is terminally ill and has not been coerced. Think of how busy your own GP is and how well they know you. How can they possibly be expected to make an objective judgement about these things?

When I did my euthanasia tour I talked to people involved in the group Compassion and Choices - the equivalent of DiD in the US. Their strategy was very clear - push for 10-15 years with stories of desperate cases and eventually public opinion will change and the law will follow.

DiD are using the same techniques here and lining up all their celebrities to endorse it. They have all the money and all the media support. But we have no money and our only celebrities are me and the Pope!

But I don't want to die. And to talk about choice when so many vulnerable and disabled people do not have a choice about basic care, housing and support is to put us in a very dangerous position indeed.

This is really serious. It's about life and death. If this bill becomes law some disabled and vulnerable people will be subjected to exploitation and abuse and will die as a result.

The very reason we don't allow capital punishment in this society is because the best police investigation and the best judges can come to the wrong conclusion and execute an innocent person.

This bill if passed will also mean that innocent people get killed. The current law protects people against this kind of abuse. It does not need changing.

I appeal to you to join me on 11 September in opposing this bill.