Almost seven weeks after it was announced, and barely seven weeks until MPs - many of whom are now on holiday - debate it, the Assisted Dying (No. 2) Bill is finally published 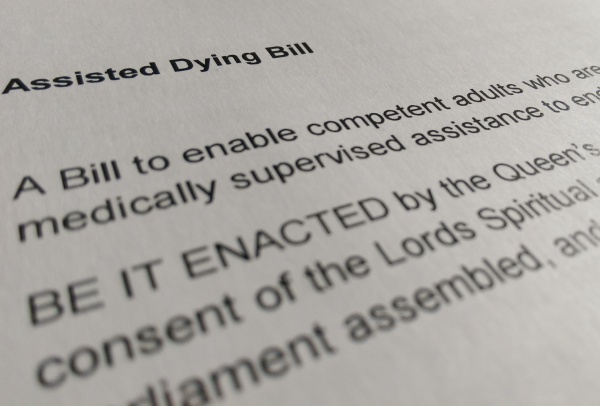 Labour backbencher Rob Marris's Assisted Dying (No. 2) Bill, which follows closely the lead of Lord Falconer's bills in the House of Lords (2013-4, 2014-5, 2015-6), has been published. While Parliamentary bills are usually published on Parliament's website, the Assisted Dying (No. 2) Bill's contents and explanatory notes do not yet (i.e. as of the afternoon of 27 July) appear there, and were rather disclosed at news site Politics Home.

The Bill's stated purpose is

and it retains, as did the most recent version of Lord Falconer's own bill, the provisions relating to the High Court first proposed by Lord Pannick in November 2014.

I do wonder where those who make that last demand have been for the past 20 years because we've repeatedly had the debate in public, in the media, and importantly, several times in Parliament. Let's be honest. It's not just a wish to 'have the debate' is it? It's really a determination to get it legalised.

The Bill's content has been made public late in the day - the Parliamentary debate looms larger in our future than does the initial announcement in our past. This is despite the fact that the content is broadly the same as Lord Falconer's current version in the Lords, which was published in May. It was also drafted by Dignity in Dying (the former Voluntary Euthanasia Society), to whom Rob Marris, in whose name the Bill is before the Commons, is directing all enquiries and who have been commenting sporadically on the Bill's content as it suits them for weeks. Do proponents of assisted suicide really want debate?

The Bill's content is, however, now in the public domain. If you haven't already contacted your MP or if you were told that they wouldn't comment on a bill they hadn't read, now is your time. Act today.

Margaret: Tue, 4 Aug 2015 20:03
I find the whole business terrifying and chilling as they discuss the matter of allowing someone to kill themselves.

How are these so -called safeguards going to be scrutinised as doctors are such busy people. The few (at the moment) medical staff who agree to the provisions will be under pressure and thus find quicker ways of enacting the procedure as can be seen now with abortion mis-certification. Forms to administer and permit abortions are kept signed before patients seek abortion which is an unlawful practice showing little respect some doctors have for human life.
Assisted suicide is the other side of the coin to abortion and must not be allowed to come into law.
Please enable javascript to post comments!
Our Position »
Live Issues »
Scotland »
FAQs »
Get Involved »
Donate »