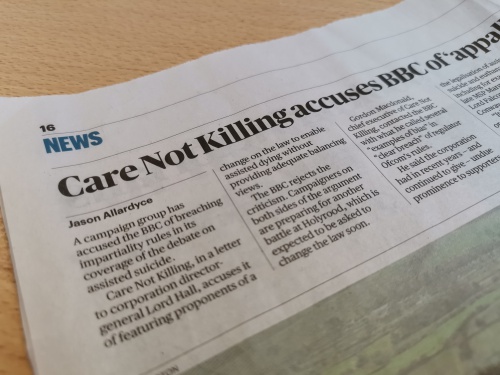 How assisted suicide, euthanasia and our ability to care for and support those with terminal and incurable conditions are presented in the media are key to framing public perceptions; the state broadcaster's dominance means its responsibility to present both sides of key ethical debates equitably is all the greater. Regrettably, the BBC continues to indicate a lack of interest in representing the breadth and depth of opposition to assisted suicide. We have noted this again and again, and recently, we put our concerns to the Director-General, Lord Hall - as reported in The Sunday Times:

'Gordon Macdonald, chief executive of Care Not Killing, contacted the BBC with what he called several "examples of bias" in "clear breach" of regulator Ofcom's rules.'

'"It has failed to give equal, or even proportionate, coverage to those who oppose facilitating the suicides of terminally ill and disabled people as standard practice," he said.

'Among the cases he cites is a recent package featuring an interview with assisted dying campaigner Paul Lamb that he said did not include any counter-arguments or suggest an alternate view. He said it is also worrying to see BBC items on the matter not linking to groups such as the Samaritans for those viewing them who are feeling depressed or suicidal.

'Macdonald also cites an episode of the John Beattie show on BBC Radio Scotland last month on the latest attempt to change the law north of the border. He complains that it featured two guests backing the change with no dissenting voice heard putting the other argument.'

Among more glaring recent examples was the BBC's coverage of campaigner Geoff Whaley's death by assisted suicide at Dignitas in Switzerland; front and centre was a much-promoted interview between Mr Whaley, his wife Ann and the BBC's Home Editor Mark Easton. The interview as broadcast lasted for more than five minutes and included Mr Whaley discussing the effect he hoped his assisted suicide would have on efforts to legislate for assisted suicide, yet Mr Easton made only one attempt to push back against Mr Whaley's point of view, asking him:

'For some people, the moment of your passing is a matter for the Almighty, and not for you. Do you respect that view?'

Not only did he make very little attempt to note that there exists opposition to legalising assisted suicide, but when he did, he used it as an opportunity to paint opposition as a niche religious view rather than acknowledging the diverse viewpoints - of healthcare professionals, disabled people, relatives, humanists… - which coalesce around evidence-based support for existing protections.

In modern life, many people have very little firsthand experience of death and dying; research indicates that most people feel they know very little about the reality of death. When opposition to assisted suicide is minimised and cynically caricatured in the media, public understanding of a reality we must all face is further distorted.

The BBC can and must do better.