Sir Bernard Jenkin asserted that 'the question is whether we can safely change the law in a way that does not create new or worse dangers.' Jim Shannon contended that 'the right to die for the eloquent and financially well off will become a duty to die for the vulnerable.' 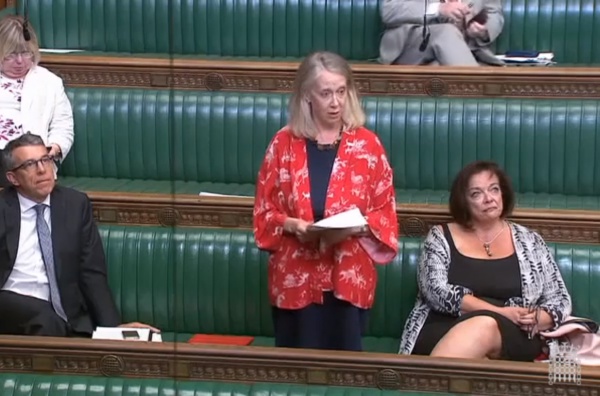 Lyn Brown of Labour hammered home the danger of a 'choice' of assisted suicide placing patients who might feel, or be made to feel, a burden, under pressure to end their lives:

'My mum died suddenly, riddled with cancer. I know that had this law been passed at that time, she would have spent her last months consumed by guilt and anxiety about when she should press that button. She would have worried about the pressure on me and my sister, about the cost of her care, and that people would have thought she was consuming resources that she should not consume. Sometimes when we have this debate, we do not consider collectively the pressure we would put on people by giving them that choice.'

'I really… think there is an absence of understanding about just how difficult it is for many people in this country and elsewhere to withstand the pressures of family who might feel that they are a burden. We are tripping gently into a hellish nightmare for many people.'

Jim Shannon of the DUP, pointing to the majorities in Washington and Oregon of assisted suicide participants who cited not wanting to be a burden as a reason for death, said:

'I have no desire to live under a law like that, and no desire therefore to see the legalisation of assisted suicide in the UK. We need a system that supports and helps families so that no one feels they are a burden, and I will push for change on this rather than in the current law.'

'whose law in this area was also cited by the hon. Gentleman as an example we should follow. Just a few days ago, a clinical director from Canada… told us of grave problems now being encountered in that country in connection with the practice of assisted suicide. She told us that in fact medical assistance in dying, or MAID as it is called there, involves in 99% of cases euthanasia, not assisted suicide. She told us of funding allocated to palliative care previously now being diverted for these purposes; of assessments being done on a very rudimentary basis, including even by telephone; of safeguards such as the 10-day reflection period being regularly shortened; and of MAID being used for non-terminal illnesses, even in a case of arthritis. There are now even proposals for it to be extended to so-called mature minors.

She also pointed to the danger of mission creep, noting that advocates argue for 'a very focused, very limited, legal change on assisted dying, but it would not stop there.' Nick Boles retorted:

'But the law has not changed in Oregon; it has remained exactly the same for 20 years.'

Almost a fortnight earlier, an amendment to Oregon's 'Death with Dignity Act' completed its passage through both chambers of the Oregon state legislature, with no indication that the Governor would veto this weakening of the law. Boles was surely also aware that the law had, more insidiously, evolved without statute amendment, to broaden eligibility.

Labour's Liz McInnes (pictured), who voted against the Marris Bill in 2015, argued that

'In the current climate, at a time of overstretched NHS budgets and massively underfunded social care, if assisted dying were legalised, it would begin to be seen as an alternative to treatment and care. I believed then, and I believe now, that there is a real risk of a subtle but dangerous culture change in which vulnerable, terminally ill patients come to see assisted dying as a treatment option and the best way to stop themselves becoming a burden to their families, the NHS and wider society.'

The DUP's Jim Shannon took up this theme, saying:

'The basic problem with the proposal to legalise assisted suicide remains unchanged. It costs about £5 to give someone a lethal dose of barbiturates. It costs between £3,000 and £4,000 to keep someone in a hospice for a week. In that context, the right to die for the eloquent and financially well off will become a duty to die for the vulnerable.'

'I worry also about our attitude towards people with disabilities. In 2015, a disability campaigner expressed their concern to me about changes in legislation having the potential to lead to value judgments being made about whether other people's lives are worth living or not and to send out a message that suicide is acceptable in some cases. As the campaigner said to me,

"Someone taking their own life is seen as a tragedy, except if that person is disabled. Then it is seen as understandable."

'I do not believe that there have been any societal changes between then and now that have led to any alteration in attitudes towards those with disabilities, and those concerns remain valid.

'[A retired GP] told me that in her career she had been asked on a few occasions by terminally ill patients if she could end their lives for them. She said to me that when she had explored their issues, she found common themes, including the fear of being left alone without support, worrying about suffering from poorly controlled pain for the rest of their lives and the need not to be a burden on medical staff and carers. There were also psychological issues, including profound sadness and despair at their predicament, sometimes accompanied by depressive illness. However, she then told me that, once she had addressed these concerns properly, the request to end life was not been made again, and in most cases it had been possible to achieve a dignified and peaceful death.

'If we are to achieve this outcome, it will require good quality palliative care, which does not come cheaply… and we need to put the provision of good-quality end of life care on a much more sustainable basis. Some of my constituents who support changes in the law have said to me that they want to see changes because:

"Nobody should be forced to live in unbearable pain."

'I completely agree with that, and that is exactly why we need to make sure that patients receive better palliative care, and to ensure that better information and support are given to terminally ill patients and their families.'