Government minister tells assisted suicide campaigner the Government will not form policy on a matter of conscience, and reminds peers that the current law has been judged to strike a 'fair balance' 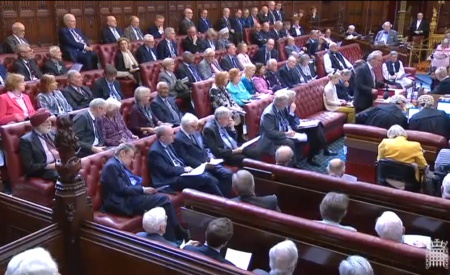 Baroness Meacher rose from the benches of the House of Lords this morning,

'To ask Her Majesty's Government what assessment they have made of whether the threat of prosecutions under the Suicide Act 1961 is causing suffering to mentally competent, terminally ill people at the end of their lives.'

Molly Meacher is Chair of the Board of Dignity in Dying (formerly the Voluntary Euthanasia Society) which has been working closely with the family of Mr Geoff Whaley, whose assisted suicide in Switzerland earlier this year generated great media interest. It was not then surprising when she premised her supplementary question on their particular experience.

Responding for the Ministry of Justice, the Advocate-General for Scotland Lord Keen of Elie said:

'My Lords, the Government recognise the challenges faced by those suffering from a terminal illness, and the desire of some to have choice over how to end their lives without fear of prosecution of themselves or those close to them. In a recent case, the High Court found that Parliament's decision not to change the current law strikes a fair balance between the interests of the wider community and those of people who are terminally ill and wish to be helped to die... the Government do not plan to change the law at this time.'

'while sitting as a Justice of the Supreme Court in the case of Nicklinson and Lamb in 2014, he said that,

"there is a diversity of opinion about the degree of risk involved in relaxing or qualifying the ban on assisted suicide, but not about its existence. The risk exists and no one appears to regard it as insignificant. There is a reputable body of experienced opinion which regards it as high".'

Labour's Lord Dubs sought to raise polling results as an argument for change. Lord Keen wisely said that the polling favoured by advocates was not the only polling data available, and it is worth noting that in his aforementioned Reith Lecture, Lord Sumption had noted that polling data was open to question and dependent on wording.

Lord Mackay of Clashfern, a former Lord Chancellor who 'chaired a committee of the House on this issue many years ago', asked, pertinently:

'Is it possible to take account of the suffering that may be experienced by vulnerable people, surrounded in their weakness by relatives whose interests may not be completely in the best interests of the vulnerable person? That is a serious risk to be taken into account.'

Timothy Dakin, the Lord Bishop of Winchester, reminded peers that this year's Royal College of Physicians consultation on assisted suicide found opposition among those working most closely with dying people - in palliative medicine - to be above 80%. He said:

'The Secretary of State for Justice is committed to meeting organisations that support changes. Can the Minister assure this House that the views of those opposing such reforms, out of due concern for vulnerable patients placed at risk of abuse, have been and will be equally considered?'

Lord Keen assured Bishop Dakin that 'they will be given an equal opportunity to express their views on this difficult matter.'

'My Lords, do the Government accept the evidence from jurisdictions that have changed the law? A recent paper from Holland shows that a majority of Dutch physicians feel pressure when dealing with requests for euthanasia or physician-assisted suicide, and their confidential survey shows a mismatch of many thousands more between euthanasias and assisted suicides and the reported figures. In Belgium there are estimates that up to 50% may not be reported. It is on the basis of the danger to those who can be pressurised that many people feel that a change in the law is too dangerous to contemplate.'

Read the full Hansard transcript of the debate here