A motion in support of the Falconer Bill has been rejected by AMs, whose constituents would be covered by the Bill 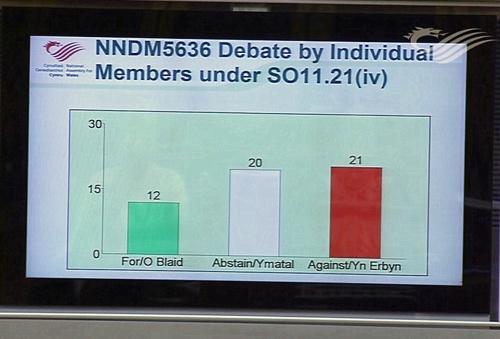 In a succinct but excellent debate on Wednesday 10 December, members of the devolved assembly in Cardiff rejected a motion supporting the principles of Lord Falconer's Assisted Dying Bill, which is currently stalled in the House of Lords. With 53 of its 60 members present, the motion was defeated by a 2-1 margin with not even all of the debate's instigators voting in favour. The relevant competence is not devolved to Wales as it is to Scotland (where the late Margo MacDonald's bill is being considered by MSPs), and so the Falconer Bill would cover both England and Wales - hence the significance of AMs' views in this non-legislative vote.

For those who are more used to seeing this debate 'played out' in Westminster, the Senedd offered a refreshing honesty: it should be a source of great reassurance that where members do not know, or wish to ask a colleague an intelligent question in public, they feel able to so say or ask. Here are a few highlights from the debate.

'No-one in this Chamber, I am sure, would want to see a fellow human being suffer, but is support for this particular Bill on assisted dying the best way to secure such relief? I am not convinced that it is. Can the law ever, in fact, provide for sufficient safeguards to prevent unintended consequences from such a law? I do not think that it can. What about those who suffer but are not terminally ill, or those who perhaps lack the competency to make their own decisions, such as children or those with dementia? Would a law in this area perhaps open up the door to extensions of its provisions to them? I think that, eventually, it is likely that it would... Providing improved access to such care is surely a better hallmark of civilised society, and a better response to this debate than the provisions in Lord Falconer's legislative proposals.'

'We must remember that suicidal thoughts and intent are often fluctuating and are rarely fixed. The Royal College of Psychiatrists, back in 2006, observed that studies of the terminally ill showed that depression is strongly associated with a desire for hastened death and that, once depression is effectively treated, in excess of 98% of people change their minds about wanting to die. Research in Oregon, which has legalised assisted suicide, has established that around a quarter of those seeking to end their life are clinically depressed. So, it is surprising that Lord Falconer's proposals do not require an assessment by a mental health professional as part of the decision-making process on assisted dying.'

'The more I read and think about this legislation, the more I realise how complicated and difficult it is. In principle, I support the right of an individual in these circumstances to bring their life to a dignified end... [but] while I am sympathetic to the Bill's principles, I am not yet wholly convinced that it is possible to introduce the proposed legislation without there being serious social and ethical consequences. One of my concerns is whether it undermines the challenge, respect and commitment that we have as a society to look after our elderly, those with illness and disease, and those in suffering. Are we able to achieve this without a move away from protecting life towards an easier, utilitarian culture, perhaps epitomised by a diminution of respect for the elderly in society and even among the elderly themselves? How might such a change impact on the role and morale of doctors, nurses and carers, who are committed to preserving life and the wellbeing of the elderly, infirm and vulnerable? How might the way that they are perceived in society be changed and possibly undermined? That is the conundrum facing us. So, it is right that we have this debate. However, to support this legislation, we have to be wholly and unequivocally convinced that the rights of the individual are not outweighed by the potentially adverse consequences to broader society. So, although I have put my name to this motion to enable this debate to take place, I have to say that I am not yet so convinced, and, while that uncertainty remains, I feel it necessary on this occasion to vote against the motion.'

'Many people categorise this argument into those who believe in the concept of assisted dying—the concept actually does not exist in law, it is 'assisted suicide'; it is a nicer way, I think, of putting it, but let us call a spade a spade, that is what it is—and those who believe in the principle of palliative care. However, I think that it is the failure in palliative care that often leads to calls for this. There have been great advances in palliative care, but, if we go back to the last debate that we had, on the cancer delivery plan, we will know that there are huge gaps in palliative care services in Wales. Only 23% of people who died were actually registered as palliative care patients. I know, from nursing my own father very recently, of the gaps in the services and how vulnerable they can leave an individual and a family.'

'While we rightly treat people who attempt to take their own lives with understanding and compassion, as a society we do not regard suicide itself as something to be encouraged or assisted, as suicide watches and suicide prevention strategies amply demonstrate.

Killing people is cheaper than providing palliative or long-term care, and healthcare resources will always be constrained. This must mean that healthcare teams and society in general will feel under pressure to encourage patients to choose suicide. If it becomes legal for some people to help kill others, they will inevitably do so for reasons that are nothing to do with a patient's actual reasoned wish to die.

For myself, I will assert that we are not just establishing a right to what was previously forbidden, but we are changing how we think of the act itself of suicide—from a tragedy to a benefit, a release from suffering; and of assisting suicide—from a crime into a service. We are asserting that helping people in pain to end their lives—killing them, to be more direct—is a positive good that is the state's obligation not merely to tolerate, but to facilitate.'

'We know as legislators that laws must be made for the betterment, flourishing and protection of the many not the wishes of the determined and desperate few. So, as well as permitting or prohibiting actions, laws also shape perceptions. Despite all the talk of safeguards, it is simply not possible to use the state to provide a mechanism whereby people can end their lives without conveying a message that some lives are not worth living, that it is okay for some to be assisted to kill themselves if they have a terminal illness... Instead of feeling protected, the vulnerable would find themselves exposed, I believe, to pressure.'

Mark Drakeford (The Minister for Health and Social Services)

'As we have heard, the Assisted Dying Bill is intended to legalise assisted suicide for terminally ill, mentally competent adults—not people with dementia, of course—in Wales and England, who have a clear and settled intention to end their own life and are reasonably expected to die within six months.'

We note the Minister's remarks because their timing had a particular potency. He referenced dementia because it had come up as an issue affecting competence a number of times throughout the debate, but the debate in fact came just a week after a joint report was published by the Alzheimer's Society and Marie Cure Cancer Care which noted the widespread failure to recognise dementia as a terminal illness. For the many thousands of people across the country who live with the devastating reality of dementia, this simple slip will represent an ongoing failure to recognise that the terms of reference in this debate are far from straightforward, and such a legal change as is proposed can never be as simple as proponents claim. AMs recognised this on December 10; we hope that Lords, MPs and MSPs continue to do so too.

Read or watch the debate in full