'The committee needs to consider whether, as a society, we want to send out the message that some people's lives are not worth living because of the quality of life that they perceive themselves to have', CNK Scotland's Gordon Macdonald tells MSPs 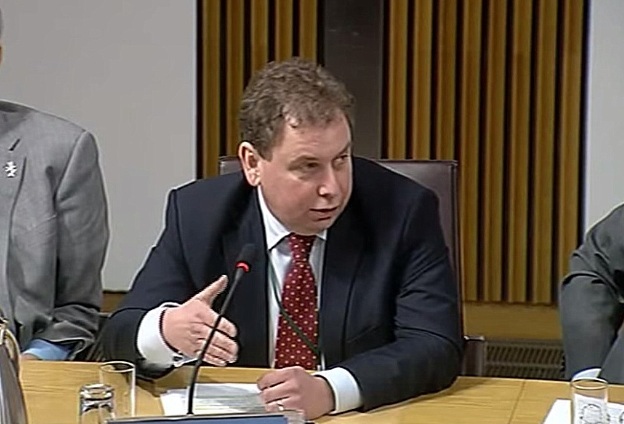 Giving evidence before the Scottish Parliament's Health and Sport Committee on 3 February, Dr Peter Saunders and (pictured speaking on the day for CNK member organisation CARE) Dr Gordon Macdonald questioned the scope of the Assisted Suicide (Scotland) Bill, its principles and what passage would say about Scottish society.

Highlights, with commentary in italics.


Dr Peter Saunders: We need to grasp that this is not about the condition of the person; it is about the person with the condition. I give the example of the two rugby players, Matt Hampson and Daniel James. Daniel James was paralysed, found his life intolerable and went to Dignitas. Matt Hampson, who has an even worse disability and is on a ventilator, is an inspirational speaker who goes around schools and did everything that he could to change Daniel's position. We have to understand that this is about the person with the condition and their attitude.


Dr Gordon Macdonald: The committee needs to consider whether, as a society, we want to send out the message that some people's lives are not worth living because of the quality of life that they perceive themselves to have. Alternatively, do we say that we have a responsibility to protect those who are in a vulnerable position and feel as if they are a burden on family, friends and the National Health Service, or under pressure to commit suicide for some other reason? The fundamental issue of principle is about protecting the autonomy of the few versus the needs and interests of the many. (Link)

The fundamental question is whether we are content to move to being a society in which choice is the absolute public good. If that is the case, we should not put a restriction on it... If that is to be the founding principle, you should not say that that choice should be restricted to the terminally ill or people who have chronic conditions. Why would it be wrong for people who are lonely to commit suicide or to be given assistance to commit suicide? We are talking about the state, through the medical profession or other professions, providing assistance to people to commit suicide.

That would run contrary to everything that the Scottish Government's and other public agencies' suicide prevention policies are about. They are about saying, "Don't give up. Life is worth living; it can be improved." You would be sending out mixed messages and also saying, "Actually, your life isn't worth living." You would be endorsing that view and encouraging people to commit suicide rather than saying to them, "Hold on a minute. That is not the case. You are valuable. You have intrinsic worth and there are people who love you." (Link)


Dr Peter Saunders: We all cherish autonomy and we are all thankful that we live in a democratic society that respects autonomy, but we also recognise that there are limits to autonomy and that we are not entitled to exercise freedoms that undermine or endanger the reasonable freedoms of others. That is why we have laws and why the committee is here to craft those laws. Every single law on the statute books stops some person doing what they might desperately want to do. (Link)

The best kind of laws and those that are easiest to defend are those that are very clear; it is far easier to defend the borders of a country if they fall along natural geographical features such as mountain ranges or rivers. In the same way, the laws that are most easily defended are those that have blanket prohibitions but give discretion to prosecutors and judges, which is the current situation in the UK... Once you create an exception and a right for some people, you immediately set yourself up for new hard cases to come along that challenge the boundaries under equality legislation. (Link)


MSPs continue to find unlikely claims that few deaths will occur under the Bill:

Bob Doris (SNP), Glasgow MSP and the committee's deputy convener: We have also heard the word "exceptional" this morning—assisted suicide will be for "exceptional" circumstances—and we have heard the expression "tiny number of people". We have to compare that with what the bill says. The bill will provide that those with certain illnesses or conditions will be eligible to seek an assisted suicide. Eligible individuals will be those with

That does not sound like a tiny number of people to me... (Link)


The evidence bears this out:

Dr Peter Saunders: We are deeply concerned about the wide scope of the bill. We are not just talking about people who have a terminal illness. The fact is that most progressive conditions have a life-shortening effect, so we are not just talking about cancer but about coronary heart disease; chronic obstructive airways disease; neurological conditions such as multiple sclerosis; diabetes; high blood pressure; obesity; dementia; many mental illnesses; and many acquired and congenital disabilities. All those fall within the bill's remit. We need to grasp the fact that, at the end of the day, it is not about whether the person qualifies under the bill but whether they feel that they qualify or whether a doctor is willing to sign a paper to say that they qualify.

Oregon has a six-month life expectancy requirement, but people have lived for several years after being given authority to kill themselves under the Oregon law. According to the statistics, in 2013, 16.9 per cent of those who killed themselves did not have a terminal illness. The footnotes in the annual report include references to deaths due to benign and uncertain neoplasms; other respiratory diseases; diseases of the nervous system such as Parkinson's; musculoskeletal and connective tissue diseases; viral hepatitis; diabetes; cerebrovascular disease; and alcoholic liver disease... The incredibly broad scope of the Harvie bill, which includes even the ageing process or arguably even life itself as life-limiting conditions, encourages a free-for-all. (Link)

When the [abortion] law was passed in 1967, it had strict safeguards, and the reason for that was to provide protection for the life of the unborn child. My point is that the law has not changed but the interpretation of it has. In effect, doctors, acting in good faith, authorise about 98 per cent of abortions outside the original intended scope of the 1967 Act.

My point is that, once you allow a right to assisted suicide in certain circumstances, the same drift will happen... as time goes on we see a change in the public conscience and the medical conscience. That does not worry some people, but it worries me a lot that the public conscience changes so that people come to accept situations that, 10 or 20 years ago, they would have found intolerable. (Link)