'It gives far too much power and not nearly enough accountability to doctors who are not really in a position to make the judgment that the bill requires', CNK's Campaign Director tells MSPs 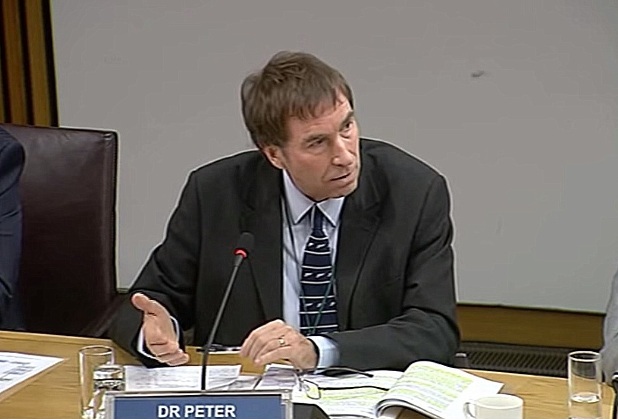 CNK's Dr Peter Saunders (pictured) and (speaking on the day for CNK member organisation CARE) Dr Gordon Macdonald gave evidence before the Scottish Parliament's Health and Sport Committee on 3 February. Concerning Patrick Harvie's (formerly Margo MacDonald's) Assisted Suicide (Scotland) Bill, our colleagues discussed the Bill's implications, for the doctor-patient relationship, for the accountability of doctors and for the place of palliative care.

Highlights, with commentary in italics.

Bob Doris (SNP), Glasgow MSP and the committee's deputy convener: If someone goes to a GP and says that their pain is really bad and that they are not sure that they can go on, should the GP be duty-bound to say that one of the options is assisted suicide? If someone goes to a pharmacist for a chronic pain management and pharmaceutical review and they say that the treatment is not working for them, should the pharmacist have to say that? If someone has a nurse specialist to deal with their condition, should the nurse have to say it? For many conditions, there are managed clinical networks and treatment options along the way. Should the option be part of the managed clinical network? It is important to know all that, but I do not think that it is all in the bill. (Link)


Dr Peter Saunders: In Oregon a few years ago, two patients—Barbara Wagner and Randy Stroup—both applied to the Oregon health department for chemotherapy treatment for their cancers, but both of them received letters saying "We're sorry, but we can't fund your chemotherapy. However, we will fund your assisted suicide." They thought that that was quite interesting because neither of them had asked for that option.

The point is that once we legalise assisted suicide, we make assisted suicide a "treatment" option for a range of conditions, which means that a general practitioner or other doctor is obliged to present it as a treatment option. However, far more important is that, as a treatment option, it gets costed. When we put the cost of chemotherapy or radiotherapy at tens of thousands of pounds and the cost of palliative care or hospice care at £3,000 or £4,000 a week against the cost of a glassful of barbiturates—five quid—it is inevitable that there will be pressure to take the cheapest treatment option. (Link)


Dr Gordon Macdonald: In the scenario where the bill has been passed, if a doctor raises the issue of suicide with a patient, will the patient go away from that conversation thinking, "The doctor thinks I should commit suicide," or will the patient go away saying, "I shouldn't be having these suicidal thoughts"? We need to get to the bottom of that dilemma. (Link)


Dr Macdonald then took the Bill's supporters to task for their disinterest in providing for the conscience rights of healthcare professionals, the majority of whom remain opposed to being involved in assisted suicide:

Dr Bob Scott (My Life, My Death, My Choice): Our understanding is that the bill does not include a conscience clause, as it is beyond the powers of the Scottish Parliament to put one in. However, it is clear in the policy memorandum that no doctor should be compelled to participate in the process. It is nigh on certain that, were the bill to be passed, the General Medical Council would modify its regulation and standards for doctors, taking into account the possibility of doctors not taking part in any part of the process. (Link)

Dr Peter Saunders: The thing that concerns me most about the bill—and I say this as a doctor and someone who knows doctors—is that it gives far too much power and not nearly enough accountability to doctors who are not really in a position to make the judgment that the bill requires.

We are talking about calling on busy general practitioners, who are under a lot of pressure and who do not necessarily have the skills of palliative medicine specialists or psychiatrists, to make judgments about patients whom they might only just have met and whose family situation they do not know; to assess their mental capacity when they might not be able to do so; to assess undue influence; and to judge whether a condition falls within the broad range of conditions, or whatever. There are a huge number of pressures and there are some doctors—and I am talking about a minority here—who really scare me and who, if they were to have such power and authority, would abuse them.

I see nothing in this bill to stop, say, a Shipman who gets a taste for killing and authorising such things abusing the situation. The bill does not contain safeguards; instead, it contains eligibility criteria for illness, capacity and so on. Those criteria can be stretched, and at the end of the day, the question will not be whether a patient meets the criteria but whether a doctor is prepared to tick a box to say that they do so.

What worries me most about the bill is that the only provision that seems to be about keeping doctors accountable is one that lets them off. I am talking about section 24—or the savings provision—which removes culpability for incorrect judgments and inconsistent actions as long as they are made "in good faith". It contains no penalties for abuses or careless errors and makes no suggestion about how such things might be investigated. (Link)

Dr Gordon Macdonald: Dr Shipman's case is the extreme, is it not? However, it is a historical fact. In that case, a second doctor was involved—or a number of second doctors, potentially—who signed the cremation forms and did not give due diligence to what they were doing. The concern is that what the bill proposes becomes just a tick-box exercise. (Link)

Dr Peter Saunders: On the issue of palliative care, we know from all the surveys that have been carried out that between two thirds and three quarters of doctors oppose a change in the law; indeed, the BMA and most of the royal colleges, too, oppose it. However, I have always been struck by the fact that opposition is disproportionately high among palliative medicine specialists... people who deal with the dying understand the vulnerability of dying and disabled people in a way that other doctors do not. They spend a lot of time with those people; they understand the family dynamics and the subtle pressures that families can put on them; they see their vulnerability and see them making choices often because they have no other choice; and they recognise the need for people to have legal protection.

However, the second reason is that palliative medicine specialists know exactly what to do with all kinds of different symptoms, whether they be physical ones such as pain and nausea, feelings of social exclusion or spiritual problems such as lack of meaning and purpose. Specialists are specifically trained to deal with such things.

Much of the push for this change in the law is coming from the worried well rather than from really sick people. In fact, the percentage of those dying who want euthanasia or assisted suicide is much lower than the percentage in the general population, simply because people change their minds when they see the care that they can have and when they experience good care. (Link)


Witnesses were agreed that palliative care was open to and in need of continuous development - but, in some quarters, there was an apparent lack of faith in its current potential:

Jennifer Buchan (Humanist Society Scotland): We want the bill to be passed. Four out of five people in the country have immediate personal experience of family members or friends who have suffered so greatly that they would not have them go through that again. I am a nurse who has worked in hospitals and in the community. I have worked with people who have dreaded the time when living would become unbearable for them. (Link)

The concept of inevitable pain and indignity has become a hallmark of the case for legal change, and so the suggestion that 80% of Scots need assisted suicide was regrettable but unsurprising.


Dr Peter Saunders: You must remember that palliative care involves not just the relief of physical symptoms, but physical, social and spiritual care—it is total-person care—and we know that, when people have their physical, social and spiritual needs properly met, requests are rare even in countries that allow euthanasia or assisted suicide. That must put the onus on us to ensure not just that the very best care is available but that it is made accessible and affordable to people. (Link)


Dr Gordon Macdonald: The question is, with pressures on budgets in the health service, a lack of training and so on, would people be given access to the palliative care? I welcome the fact that the committee is going to look at palliative care. A few years ago, Roseanna Cunningham proposed a bill to establish a statutory right to palliative care in Scotland, and I encourage the committee to consider whether we should legislate for that. However, that is a debate for another day. (Link)