Peers urged to ditch dangerous assisted suicide bill, as new polling shows that one in ten Britons would favour rewarding older people for ending their lives. 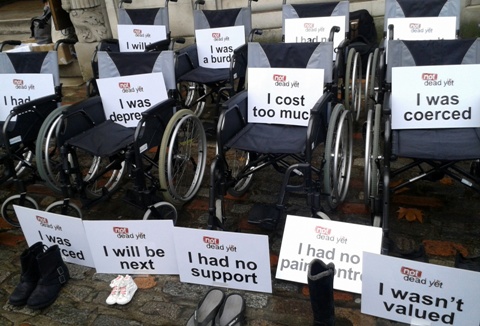 Peers are being urged to ditch a dangerous assisted suicide bill that could lead to more than 1,200 deaths a year. Lord Falconer's Assisted Dying Bill has its committee stage in the House of Lords on Friday 7 November.

This is a joint call from disability rights campaign, Not Dead Yet and from Care Not Killing.

The two groups say that changing the law on assisted suicide would weaken protections for vulnerable people. They highlight the findings of a new poll from ComRes, which reveals high levels of concern among the British public around the proposed changes.

The poll found a clear majority believe that it is impossible to make a completely safe system.

Asked, "If the law is changed so that people are able to be given lethal drugs to end their life prematurely, it will be impossible to make the system completely safe from abuse by unscrupulous relatives or others who could influence the process", nearly six in 10 (58 per cent) agreed. Fewer than one in five (18 per cent) disagreed.

The pollsters found more than four in 10 (41 per cent) of those surveyed said changing the law on assisted suicide and euthanasia is likely to increase abuse of the elderly and disabled; fewer than three in 10 (29 per cent) disagreed.

While the poll found that the public remain split on the basic principle of people being able to have help from the state in ending their lives, nearly six in ten (59 per cent) thought the case of Harold Shipman showed, "that any system permitting assisted suicide could be open to abuse by people entrusted with overseeing patient safety." Just one in five (20 per cent) disagreed.

'This poll brilliantly captures the complexities around this issue. While the public remain split on the fundamental issue, it shows that the British people are far better informed than those campaigning for a change in the law believe.

'Those surveyed knew that there is no safe system of assisted suicide anywhere in the world - for example, the US state of Oregon, which is the model for this piece of legislation, has seen assisted suicide rates increase by over 400% since its introduction. At the same time a study of those ending their lives in Oregon found that nearly one in six were suffering from clinically treatable depression.'

The poll also found that fewer than a third of those surveyed believed claims that changing the law for the terminally ill would prevent the law being extended to other groups such as disabled people.

Asked, "If assisted suicide and euthanasia were legalised for terminally ill people in Britain it would inevitably be extended eventually to other groups such as the disabled" 42 per cent agreed compared to 31 per cent who disagreed.

Nearly half (48 per cent) also agreed with the statement, "If the law is changed then some vulnerable people like the elderly, disabled or terminally ill will inevitably feel pressured into ending their lives prematurely". Just three in 10 (30 per cent) disagreed.

'Those surveyed were also acutely aware of how a law designed to help terminally ill adults would inevitably be extended to other groups. Despite repeated denial by well-financed pressure groups, the public knows what is happening in Holland and Belgium. These two countries initially introduced more limited legislation but euthanasia has now been extended to include babies with spina bifida, children with terminal illnesses and adults with dementia.'

Asked about the impact of the widely reported financial crisis in the NHS, more than three quarters (76 per cent) said that vulnerable people are more likely to suffer when there is not enough money. Fewer than one in 10 (9 per cent) disagreed.

Half of those surveyed (48 per cent) believe cuts to services mean some disabled and terminally ill people might feel pressured into ending their lives because they fear being a care burden. One quarter (27 per cent) disagreed.

'The obvious conclusion is that while the public are broadly sympathetic to the rights-based argument in favour of ending lives at the time of a person's choice, there is widespread concern about the abuse to which any system is likely to be open. These concerns are apparent across three areas - by the medical profession... by unscrupulous relatives, and in terms of pressure to end lives prematurely and on diminishing palliative and other health care resources.'

Most alarmingly, a small group of those surveyed thought the elderly should be "rewarded for ending their lives".

Asked their views on the statement, "I agree with the author Martin Amis who thinks elderly people should be rewarded for ending their lives" one in 10 (10 per cent) agreed, while nearly two thirds (64 per cent) disagreed.

'The most chilling findings of this poll were the one in 10 who said the elderly should be encouraged to end their lives so they did not become a burden. This highlights the frightening undercurrent of deep prejudice that some people harbour towards the older members of our community.

'If there was any doubt about why it is absolutely vital the current legal protections that prohibit assisted suicide and euthanasia are maintained, then this one fact should be proof enough.'

ComRes interviewed 2,019 British adults online between 31st October and 2nd November 2014. Data were weighted to be representative of all GB adults aged 18+. ComRes is a member of the British Polling Council and abides by its rules.

Heather Angilley: Sat, 3 Jan 2015 21:39
Just wondered if you knew about the SPARCLE project which looked at the perceived quality of life of disabled children in European countries . It was no different to that of typical child! So the children don't feel disabled by their condition unlike the onlookers!

Also we have very few children born with spina bifida these days. This change started in the early 80s when ultrasound screening identified the problem before birth so many parent opted for termination. Since 1990 the only children I have seen with SB are immigrant families who haven't had scans. This is not a new phenomenon!
W. Carol Cleigh: Sat, 8 Nov 2014 15:00
Having reviewed the actual language of the Falconer bill, I must say that I'm happy the British people are not taken in by those who are misrepresenting it for the Better-dead-than-disabled movement. There are no provisions for psychiatric reviews nor any to prevent Dignitias style death-mills. A Shipman could wrap himself in this and avoid prosecution. It's ironic that this is even being discussed just weeks after the T-4 memorial opened in Berlin. What kinds of memorials will our children be putting up in 70 years or so?
Please enable javascript to post comments!
Our Position »
Live Issues »
Scotland »
FAQs »
Get Involved »
Donate »