An uncommunicative, severely brain-injured patient has been able to give answers clinically relevant to their care 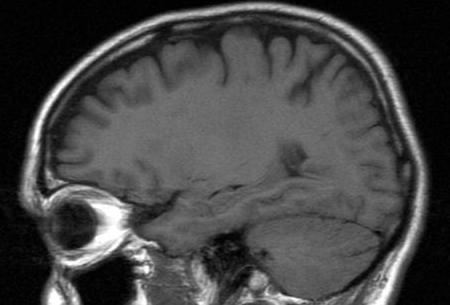 Last night's BBC Panorama told the story of a Canadian man who for more than a decade was believed to be in a vegetative state, but is now able to tell scientists that he is not in any pain.

According to BBC health correspondent Fergus Walsh, it's the first time that an uncommunicative, severely brain-injured patient has been able to give answers clinically relevant to their care. He writes:

'Scott Routley, 39, was asked questions while having his brain activity scanned in an fMRI machine. His doctor says the discovery means medical textbooks will need rewriting.

Vegetative patients emerge from a coma into a condition where they have periods awake, with their eyes open, but have no perception of themselves or the outside world.

Mr Routley suffered a severe brain injury in a car accident 12 years ago.

None of his physical assessments since then have shown any sign of awareness, or ability to communicate but the British neuroscientist Prof Adrian Owen - who led the team at the Brain and Mind Institute, University of Western Ontario - said Mr Routley was clearly not vegetative.

"Scott has been able to show he has a conscious, thinking mind. We have scanned him several times and his pattern of brain activity shows he is clearly choosing to answer our questions. We believe he knows who and where he is."

Prof Owen said it was a groundbreaking moment.'

In a second article on the BBC website, Walsh raises questions about the current law which allows vegetative patients to have food and fluids withdrawn after a court order:

'The case is important because in the past two decades, more than 40 vegetative patients have been allowed to die after High Court judges approved the withdrawal of feeding tubes.

This followed a landmark case involving the young Hillsborough victim Tony Bland, who was crushed in the stadium disaster in 1989, suffering terrible brain damage which left him in a vegetative state.

Before any judge decides to sanction the withdrawal of treatment, a thorough behavioural assessment is ordered. But they do not ask for brain scans of the type used by neuroscientists in Cambridge and Ontario to search for hidden awareness.

It is possible that that may eventually change.

Much will depend on the view of the working party of the Royal College of Physicians which has been reviewing the College's 2003 guidelines on low awareness states.'

People in a so-called persistent vegetative state (PVS) may live for ten, twenty or thirty years - in fact the record survival is more than forty.

But since the Tony Bland judgement in 1992- in which the Law Lords ruled that a young man's nasogastric feeding tube could be removed with the intention of ending his life- it has been possible in Britain to apply to the courts to withdraw hydration and nutrition from people who are severely brain-damaged but not dying (although this is possible only for those in PVS and does not apply to other less serious brain damage).

There are estimated to be between 1,000 and 5,000 patients in PVS in Britain today, but so far only 43 have died after court rulings allowing feeding tubes to be removed.

Reasons for contemporary concerns are embodied in the terms 'in their best interests' and 'further treatment would be futile'. These terms embrace three important legal precedents established by Bland.

The first precedent is that nutrition and hydration constitute treatment. The argument from our side was that they constitute rather basic human needs that all of us share. Treatments are aimed at reducing or reversing the effects of an illness. But hydration and nutrition, like air, are simply essential requirements for life. Withdrawing all nutrition and hydration from any human being will result in death. But withdrawing a treatment will only result in the deaths of those who rely on that treatment to stay alive.

The second precedent is that having one's life actively ended, when one is not actually dying, can be in a person's best interests. But that is a philosophical position based on a particular world view. We can only make a judgement that death is in a person's best interests by starting with a set of presuppositions about the nature of life, suffering, morality and death that lead to that conclusion. Our side's argument was that we have no right to decide what another person's best interests are. Or alternatively that if we are in any doubt, then the benefit of the doubt should be in the direction of preserving life. Deciding for another person that it is in their best interests to have their life ended is a very dangerous precedent indeed, especially if that person is unable to express an opinion on the matter.

The third precedent is that providing basic care to a person in PVS would be futile. But nutrition and hydration has a real and measurable effect in that it stops a patient dying from dehydration and/or starvation. So how is it futile? It can only be so if a patient's continued existence itself is judged to be futile. The argument from our side was that whilst doctors are justified in deciding whether or not a treatment was futile - in that it had no measurable effect or imposed burdens disproportionate to any benefit - they have no right to make judgements about whether a patient's life is futile.

The assumptions that nutrition and hydration constitute treatment rather than care, that being starved and dehydrated to death can be in a person's best interests and that the lives of some people are futile are all false assumptions. They should never have been given legal force. But sadly they have.

Having said that it is important to stress that in 20 years since Bland, some thousands of PVS patients have died of natural causes. So the 43 cases that have been taken to court have been a very small minority. In other words, almost always, the intuitions of family and professional carers are that there is a person there with a worthwhile life, even more reason to toughen up the law.

The Bland judgement was seriously flawed and this new data about PVS patients having awareness will heighten calls for its review. Bland and the 43 others who have died after him should not have died in this way. Just how many of them were aware we will now never know. But regardless they should have been given basic care, including nutrition and hydration, until they died naturally.

'The Mind Reader: Unlocking My Voice' - a Panorama Special - was first broadcast on BBC1 on Tuesday 13 November. Watch again at BBC iPlayer.