Actress, comedienne and campaigner Liz Carr brings a new and dynamic consideration of assisted suicide to the Royal Festival Hall this September 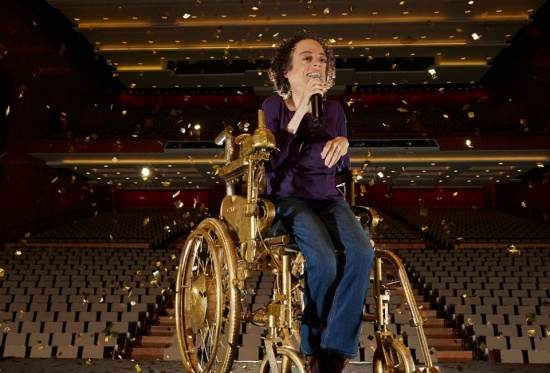 Liz Carr's advocacy for disabled people in the debate on assisted suicide goes back many years. A prominent and welcome leader at rallies outside Parliament (watch vox pops from the 2014 and 2015 rallies at our YouTube page), the Silent Witness star has made her case in interviews, open letters and collaborative efforts with other disabled people's leaders. Her two-part documentary for the BBC World Service, which took her to the various jurisdictions where assisted suicide and euthanasia are legal, gave Liz a rare joint insight both into the reality of legalisation and the difficult position too many people with disabilities already find themselves in.

Now, she is returning to the prestigious stage of the Southbank's Royal Festival Hall with 'Assisted Suicide: the Musical'. While assisted suicide is perhaps not a natural habitat for humour and entertainment, Liz's comedy career has in part been built on confronting audiences with difficult topics, and we have no doubt that her new show will be tasteful and thought-provoking, as well as marvellously creative.

Disabled activist, actor and comedian Liz Carr has chosen the spectacular world of musical theatre as the backdrop to exploring the complex and controversial subject of assisted suicide in her new show Assisted Suicide: The Musical.

In 2015, MPs voted overwhelmingly against legalising assisted suicide. Opinion polls would have you believe that the majority of the UK population believe it's a humane choice to legalise assisted suicide for terminally ill or disabled people, but Liz Carr, and many other disabled people disagree. Confronting the lack of creative work exploring this most topical taboo, she joins director Mark Whitelaw, composer Ian Hill and a cast of actors to express an important and often unheard perspective; through the medium of musical theatre.

Following previews in July, 'Assisted Suicide: the Musical' will run for two nights in September - closing a year to the day since MPs rejected the Assisted Dying (No 2) Bill.