Care Not Killing welcomes Parliament's "unequivocal" rejection of the Marris' Bill, by 330 votes to 118 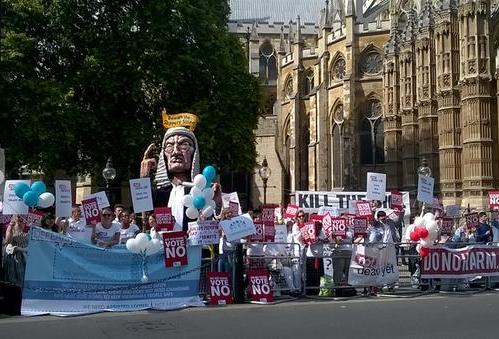 'We welcome this unequivocal rejection of this dangerous piece of legislation by the House of Commons.

'Parliamentarians have rightly rejected the legalisation on assisted suicide and euthanasia five times since 2006 out of concern for public safety - in the House of Lords (2006 and 2009) in Scotland (2010 and 2015) and now in the House of Commons.

'They have done this because they have witnessed mission creep in the tiny number of places that have changed the law to allow assisted suicide and euthanasia - countries like Belgium, the Netherlands and the American state of Oregon.

'In Belgium, which introduced a law to help terminally ill mentally competent adults, we have seen the case of Mark and Eddy Verbessem, the 45-year-old deaf identical twins, who were killed by the Belgium state, after their eyesight began to fail. Or Nathan/Nancy Verhelst, whose life was ended in front of TV cameras, after a series of botched sex-change operations. Or the case of Ann G, an anorexia sufferer who opted to have her life ended after being sexually abused by the psychiatrist who was supposed to be treating her for the life-threatening condition. Now both Belgium and Holland have extended their law to include non-mentally competent children.

'In Oregon which is the model for this piece of legislation, assisted suicide rates have increase dramatically since its introduction. At the same time because of health care rationing we have seen those suffering from cancer refused potentially life saving and life extending treatments, while being offered the lethal cocktails of drugs to kill themself with.

'In neighbouring Washington State six in ten people ending their lives under a similar law do so out of fear of being a burden. Just as troubling was the study that found nearly one in six were suffering from clinical treatable depression.

'This is why changing the law on assisted suicide and euthanasia is opposed by every major disability rights organisation and doctors' group, including the BMA, Royal Colleges, British Geriatric Society and the Association for Palliative Medicine.'

'The current law exists to protect those who are sick, elderly, depressed, or disabled from feeling under pressure to end their lives. It protects those who have no voice against exploitation and coercion. It acts as a powerful deterrent to would-be abusers and does not need changing.

'We hope Parliament will now turn its attention to the real issues facing our country of ensuring that everybody can access the very best care, regardless of whether they are disabled or terminally ill and that we fund this adequately.'