Lord Falconer is seeking to overturn the Hippocratic Oath and change 2,400 years of history

'I will neither give a deadly drug to anybody if asked for it, nor will I make a suggestion to this effect.' 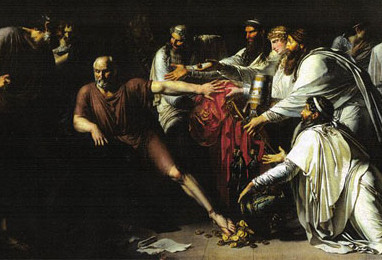 So reads the Hippocratic Oath, which used to be taken by all graduating doctors.

Hippocrates of Cos (c. 460 BC - c. 370 BC) was an ancient Greek physician of the Age of Pericles (Classical Greece), and is considered one of the most outstanding figures in the history of medicine.

His oath, at the time it was drafted, was revolutionary.

Previously, doctors had had the power to prescribe both remedies and poisons. But Hippocrates, recognising their great power and the potential for abuse, demanded that they should dedicate themselves solely to healing.

Along with the Judeo-Christian ethic, the Hippocratic Oath has formed the basis of medical ethics since 400 BC. That is, until now.

Lord Falconer, who has just introduced his 'Assisted Dying Bill' into Parliament, is seeking to change 2,400 years of history.

His bill would make it legal for doctors to help mentally competent adults with less than six months to live to kill themselves. Two doctors would need to agree that a patient met the criteria and the option would not be open to minors, people without mental capacity or those who are not terminally ill.

The final step would involve a doctor (or nurse) hand-delivering lethal drugs to the patient at a time and place of their choosing and staying with them while they took the drugs and until they were dead.

Falconer has some supporters within the medical profession.

On 18 May, twelve retired senior doctors sent a letter to the Times (£) backing his bill. And in the last few years a new organisation, Health Professionals for Assisted Dying (HPAD), has set itself up under the auspices of Dignity in Dying (formerly the Voluntary Euthanasia Society).

But as an article in the Times (£) accompanying the above letter notes, the British Medical Association and almost all Royal Colleges are opposed to a change in the law. In fact about two thirds of doctors are opposed.

Interestingly, the Times newspaper is in agreement with them.

In its editorial (£), it says it would be 'wrong to legislate' and that 'the law that Lord Falconer now wants is a step too far'.

The current blanket prohibition on assisted suicide keeps the numbers low, as evidenced by the very low numbers of people travelling to the Dignitas facility in Switzerland to kill themselves.

Furthermore, the Director of Public Prosecutions (DPP) already has discretion not to prosecute in hard cases and the authority to temper justice with mercy. But he is particularly tough on doctors, because of the power they have - as recognised by Hippocrates.

'There is a danger', argues the Times, 'that a codified law that attempted to replace such difficult and nuanced judgments with statute would produce two problems.'

'The first is a large increase in assisted suicides as it becomes more legally straightforward. This is the reason why many lobbyists for the disabled oppose the Bill, concerned that people will be put under pressure to end their lives.'

'The second danger is, oddly, an increase in prosecutions for assisting suicide, as the discretion of the old system is replaced by a more formulaic approach. This may be the reason why doctors are, in general, against a new law. And why they are right to be.'

It is significant that the Times, which backed a change in the law at the time of Falconer's last attempt to alter it in 2009, has now changed its position.

But it has done so on the basis of good evidence.

Jurisdictions which have legalised either assisted suicide or euthanasia, have seen a steady increase in cases over subsequent years and the widening of criteria to include categories of people for whom it was never intended.

Our current UK law is clear and right and does not need changing. The penalties it holds in reserve act as a powerful disincentive to exploitation and abuse, whilst giving both prosecutors and judges discretion to temper justice with mercy in hard cases.

It may not be perfect, but we tamper with it at our peril.

And Hippocrates was right about doctors too. They are too powerful and too human to be given the power and authority to kill.