Those who care for dying people every day of their working lives tell us: we don't back assisted suicide - we can do better for our patients 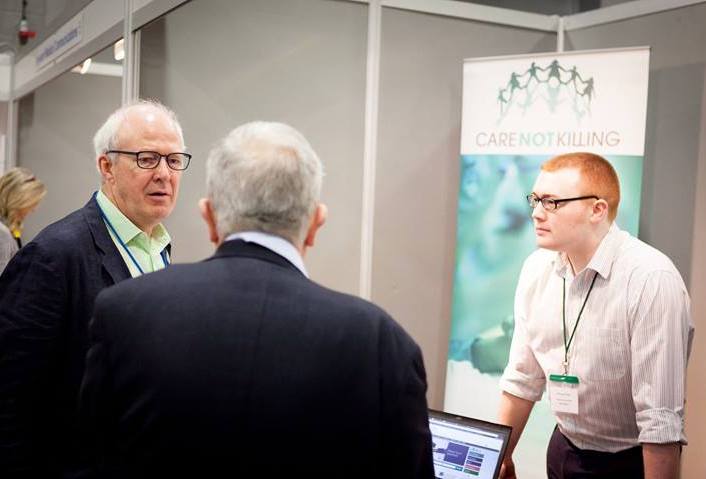 The overwhelming majority of the palliative care doctors, nurses, therapists, social workers, academics and others who made contact with CNK in Harrogate, where the Alliance was an exhibitor at last week's Palliative Care Congress, were opposed to the legalisation of assisted suicide and/or euthanasia. Their stance is based on extensive experience of helping dying people and their families.

The general consensus was that requests for assisted suicide are very rare, and most often occur in patients coming to terms with a diagnosis and the initial stages of their disease, or who are in pain. When patients in such instances discover the reality of what palliative care can do for them, or receive the right pain relief, the desire to die and the requests to be helped recede.

One surprising, and worrying, point that became apparent was the uneven level of public policy awareness among palliative care professionals. A number were unfamiliar with assisted suicide bills currently before Westminster and Holyrood parliamentarians and even the recent extension to children of Belgium's euthanasia law, which garnered much press attention in the UK, was news to some delegates. That said, among the delegates was a signatory of the ICPCN declaration which condemned the move on behalf of paediatric palliative care professionals around the world: 'euthanasia is not part of children's palliative care and is not an alternative to palliative care. It is imperative that we work together to improve access to children's palliative care around the world.'

There was strong concurrence with the reasons given by GPs in calling for their Royal College to maintain its opposition, which included the damage which would be dealt to the doctor-patient relationship - a relationship in which a doctor can have enormous influence over a patient, in which 'a word, a glance, a gesture can infer hopelessness'.

What is palliative care, anyway?

'A key aim of palliative care is to support patients to live as actively as possible until their death and to support those that are significant to them.'

So said the literature advertising just one of the events at the Congress, which as a whole demonstrated that palliative care is very far from being simply a static and narrow area of medicine aimed at a limited window of treatment.

Professor Scott Murray (Centre for Population Health Sciences, University of Edinburgh) told us that palliative medicine should always be understood - by professionals, patients and the public - through the prism of these five points:

The Congress particularly allowed us to see the fourth point at work, showcasing the remarkably diverse understanding of enabling living, not just existing. Sessions including 'exercise in palliative care' (Prof Stuart Egginton) and 'supporting sexual intimacy in palliative care' (Bridget Taylor and Dr Isobel White) were unexpected, and it was a pleasure to meet Nelise, a creative artist whose hospice-based work 'enables those with life-limiting illness and their families, to express what matters to them through an art form of their choice: memory books, a photo collage, a video, a DVD, a poem or prose writing and memory boxes'.

Sir Al Aynsley-Green's session, 'Children are the "hidden mourners". Why should we take bereavement in childhood seriously?', and the presence of bereavement specialists who advise hospitals on how to support families and loved ones was yet another example of how the broad scope of palliative care in fact extends beyond patients to those around them who will continue to bear the scars of a serious illness.

Not only is palliative care wide-ranging - it is still evolving. The commitment to developing what can be offered to patients was evidenced not only in formal sessions but also through the presence of representatives from the International Journal of Palliative Nursing, the Palliative Care Research Society and the Cicely Saunders Institute. The UK's status as a world leader in palliative care has not caused complacency, but instead a drive always to do better. Campaigners for a change in the law have spent many years painting the end of life as a time of inescapable suffering and indignity, inadequately met by tokenistic palliative care.

Nothing could be further from the truth.

At the Palliative Care Congress, we met some of the most passionate people you could hope to meet. Theirs is a passion for enabling living, not just existing; for seeking to understand and answer the difficult challenges which terminal illness and dying throw up; and for continually working to improve care for those who, though dying, are not dead yet.