Only 21% discuss end of life care

Death was always one of the great taboos of British conversation - and it seems that not much has changed, according to recent Dying Matters research. 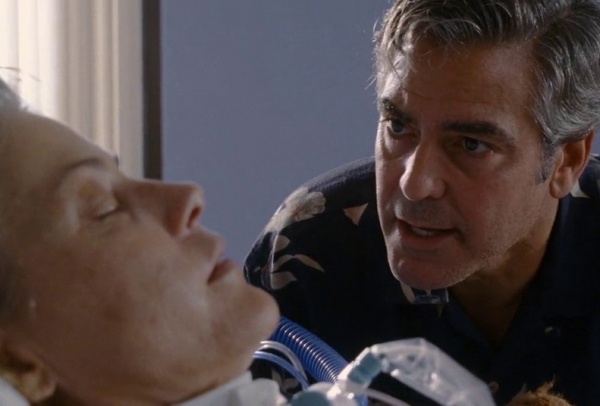 About two thirds of the way into Alexander Payne's 2011 film The Descendants, Matt King (played by George Clooney, pictured left) walks calmly into the hospital room of his comatose wife, Elizabeth. He closes the door gently and then proceeds to excoriate her for controlling and messing up the lives of everyone around her.

This powerful scene follows on from Matt's discovery that Elizabeth is not only in an irreversible coma, but that she has made a living will that has set the conditions under which life support would be terminated in the next few days. It left him the responsibility of breaking the news to family and friends that they only have days to make their last farewells. As the film unfolds it becomes apparent that the couple had not talked properly about any matters of importance for years, let alone what their dying wishes might be.

A report from the Dying Matters Coalition (12 May) suggests this is far from fictitious. Only 29% of Britons have let a loved one know their funeral wishes and only 21% have discussed any other plans or wishes for their end of life care. And less than a third of us have even made a will!

Death was always one of the great taboos of British conversation - and it seems that not much has changed. We portray death on the big screen but cannot engage with our own mortality. (It is worth noting that Payne's movie is one of the few I have ever seen that does so in such an honest and realistic manner.)

The real problem is that we tend to assume death is a future issue, not something relevant now. Just last night we had a phone call from the husband of a former colleague to tell us the tragic news of her death. In her mid-forties, with teenage children, she was struck down with little warning. I have had several such calls about friends over the years. It is always a shock to find out that one of my contemporaries has died, even in their twenties, thirties and forties and in many cases with little or no warning.

Good care at the end of life needs a real commitment to openness and frank discussion. But as a culture we fear such conversations, even when confronted with the end of our lives or the life of a loved one. There is fear that we are being 'morbid', that it's 'a bit of a downer'. Or simply that we are fearful. Even doctors and nurses are caught up in this, with about 25% of GPs indicating they had not initiated any conversation with their patients about their wishes at the end of life.

Mark Twain famously pointed out that death was one of life's two certainties, and it is not one to shy away from either. We may fear the process of dying, but with modern palliative care the path to dying well, with dignity, support, comfort and care, has never been less difficult.

Despite the public anxieties that have led to the unnecessary calls for assisted suicide and euthanasia, we are much better at helping people to die well than any other country. Maybe it is our lack of openness about death and dying that has panicked us into thinking that we need so-called 'assisted dying'?

As health professionals we can offer hope of good care. It's time to get the conversation about dying well back out into the open.