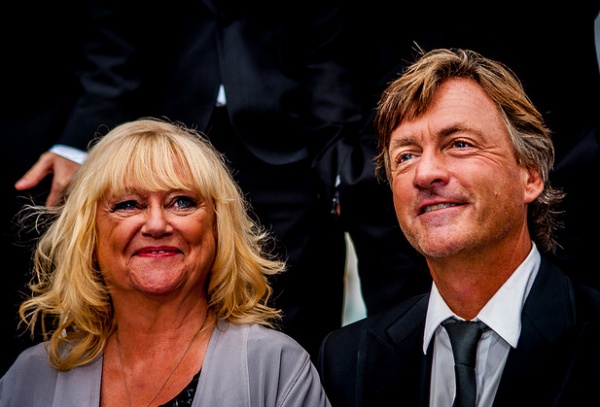 In the course of an interview for the Telegraph this week, television personality Richard Madeley said:

"If Judy was really ill and in logical mind, and at that point where you just need a little push to go over the edge," explains Richard, "I wouldn't give a tuppenny f--- if there was a risk of being prosecuted. I'd do what was right for my wife. And I'd take the consequences. That is your job, that is your responsibility as a partner."

"And I'd do the same," chimes in Judy [Finnigan, his wife]. "Stuff it all! We've made ourselves give each other a pledge along those lines."

"Yeah, if, when the time came, and I was administering the morphine or whatever, and Judy said to me, 'But what about you? What about the risk of prosecution?', I'd say, 'That's my problem, I'll deal with that, don't worry about it.' And for me, it would be the locked room, the bottle of whisky and the revolver. I wouldn't want to mess around."

"I wouldn't use a revolver," protests Judy. "Euhhh!"

As we told the BBC:

This is another deeply depressing and misguided set of comments from two much-loved celebrities, who should know better.

These headline-grabbing comments go against the advice of organisations like the World Health Organisation which says that discussions about suicide and assisted suicide need to be handled very carefully to prevent taking your own life or helping someone to die appear normal.

Changing the law so you can kill a loved one, or be killed would put many vulnerable people at risk who might be pressured into ending their life, because they might feel that they had become either a care or financial burden.

Before making similar comments I hope that Richard and Judy might investigate more thoroughly the amazing quality of palliative care we have in this country and visit one or more of the UK's outstanding hospices. How we maintain both with an ageing population and in times of austerity is what we desperately need to discuss.

Perhaps more interesting than the nature of the couple's current comments, however, is how they stack up against their comments last month following the assisted suicide at Dignitas, Switzerland of an 89 year old former teacher who felt outpaced by modern society but who was otherwise healthy.

They rightly noted that Anne's 'feelings of hopelessness, alienation, despair and suicidal thoughts' should have been treated with care, asking whether these feelings constituted 'a condition Dignitas should be giving itself permission to treat with a lethal cocktail of drugs?' CNK agrees that Dignitas has empowered itself to end the lives of very vulnerable people, but Richard and Judy are wholly inconsistent: why should we treat suicidal tendencies and depression in terminally and chronically ill people differently from those in other contexts? For Richard and Judy,

The truly disturbing nature of Anne's story is this: she was not suffering from any form of terminal disease. True, at 89, she had had her health problems - diseases of the lung and heart, requiring spells in hospital (which she hated). But she wasn't dying of cancer, or one of the nasties such as Huntington's Chorea, or multiple organ failure... At exactly what point does the combination of (undiagnosed) depression plus advancing years get the thumbs-up from the Dignitas doctors?

It is incoherent and utterly arbitrary to lay down that certain illnesses and conditions render suicide a 'good' option - this is a counsel of despair. They headed the column: 'This woman needed help NOT Dignitas': television's one-time golden couple should have borne in mind their own conclusion of only a month ago when speaking to the Telegraph:

Personally I have always supported the principle of assisted suicide but Anne's exit from this world has made me seriously wonder if it can ever be properly controlled.

This disturbing story could be the thin end of a very unpleasant wedge.

© Image copyright of Eric the Fish (2013) and licensed for reuse under Creative Commons License 2.0

I do detest so called celebrities using their media profile to expound theoretical and often misguided comments on such serious subjects as this. Wouldn't it be more prudent for them to keep their opinions to themselves under the circumstances as some may just be influenced due to their naive and blase comments using their public profile as a platform.