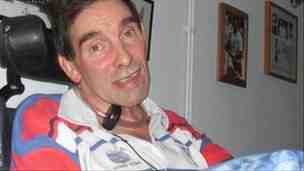 
Tony Nicklinson, 57, is paralysed from the neck down after suffering a stroke in 2005.

He cannot speak or move anything except his head and eyes and communicates through nodding his head at letters on a perspex board or by using a computer which responds to eye movements.

The Melksham man, who has been married for 25 years and has two daughters, sums up his life as 'dull, miserable, demeaning, undignified and intolerable'.

His lawyers want a doctor actively ending his life to have a 'common law defence of necessity' against any possible murder charge.

A spokesman for law firm Bindmans, which represents him, confirmed he had issued proceedings in the High Court asking for declarations that it is lawful for a doctor to terminate his life, with his consent and with him making the decision with full mental capacity.

Earlier this year Nicklinson's legal team asked the Director of Public Prosecutions to clarify the law on so-called mercy killing but the DPP made it clear there was no flexibility on the law and anyone who deliberately took someone's life would be charged with murder.

Nicklinson has Article 8 rights under the European Convention on Human Rights (respect for his private life and family) which must be respected. His lawyers will no doubt argue that these rights cannot be respected unless he dies, and accordingly that the law of necessity needs to give a defence to a doctor who, in the act of respecting his rights, kills him.

However Article 8 also states that the right to respect for private life and family must in a democratic society be balanced with considerations of public safety, the prevention of crime, the protection of health and morals, and the protection of the rights and freedoms of others.

The Murder Act is there in part to protect vulnerable people from exploitation and abuse by those who might have an interest, financial or otherwise, in their deaths. Any further removal of legal protection by creating exceptions for bringing prosecutions would encourage unscrupulous people to take liberties and would place more vulnerable people - those who are elderly, disabled, sick or depressed - under pressure to end their lives so as not impose a burden on family, carers or society.

We also need to realise that cases like Nicklinson's are extremely rare and that hard cases make bad law. The overwhelming majority of people with severe disability - even with 'locked-in syndrome' - do not wish to die but rather want support to live. Other people, who with good support, have been able to get to a position where they can see meaning and purpose in lives even in the face of substantial suffering. It is assisted living most want, not assisted dying.

We all accept that there are limits to choice. Even in a free democratic society there are boundaries to our autonomy. We are not entitled to exercise 'freedoms' that will endanger the reasonable freedoms of others. That is why we have laws. Every law limits choice and stops some people doing what they might desperately wish to do. This is in order to maintain protection for others.

The current law is clear and right and does not need fixing or further weakening. On the one hand the penalties it holds in reserve act as a powerful deterrent to exploitation and abuse. On the other hand it gives judges some discretion to temper justice with mercy when sentencing in hard cases. We should not be meddling with it.

It was therefore refreshing to see a spokesperson for the British Medical Association saying yesterday: 'The BMA is opposed to assisted suicide and to doctors taking a role in any form of assisted dying. We support the current law and are not seeking any change in UK legislation on this issue.'