There is always something to live for, says son soccer star who became 'locked in' after stroke

The son of Gary Parkinson comments on Dad's condition 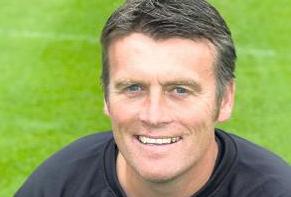 I believe a life is a life, no matter what state or condition a person is in. The people around them, whether that be family, friends, carers or medical staff, should remain positive and always remind the ill person that no matter what they may think, there is always something to live for.
Locked-in syndrome is best described as a condition of almost total paralysis apart from eye movements.
My dad, Gary Parkinson, has locked-in syndrome due to a stroke in September, 2010. I can't talk on behalf of him or any other sufferer. I can talk as a family member directly affected by the illness.
My dad has made remarkable improvements but is a long way from a full recovery and regaining the quality of life he once had. That is not to say he can't have an equally good one in the future. My dad was a fit, healthy sportsman with a football career spanning more than two decades.
The stroke struck early one morning. The night before he had been fine.
The next time I saw my dad was at Salford Royal Hospital.
He was attached to machine after machine.
This fit, healthy, lively man had been cruelly silenced by what doctors described as locked-in syndrome. What is this?
Many questions sprang to mind on my first visit and many went unanswered by medics. Much research needs to be done so doctors detect signs quicker and the whole health service becomes more effective in helping locked-in sufferers.
My dad has improved a lot since the early days.
The machines have gone.
Communication is through the use of an alphabet system, dad looking up at the letter he wants to create words and sentences.
He also uses a machine which can talk for him depending on where he looks but it can play up and really frustrate dad, another reason why research must find how to best help sufferers.
My dad still has his bad days and, yes, the question "is life worth living?" has come from him before.
But this is when we need to be even more positive and keep my dad's mind occupied.
The fact Middlesbrough FC and Tony Mowbray have allowed him to take up a scouting role keeps him positive and shows him there is a life even with a disability, something he has found hard to accept.
Opportunities should be made available to all sufferers. One has set up an online travel agency and books people's holidays through the use of an eye detection machine, similar to that used by my dad and Tony.
I feel the media should look at inspirational people such as Kate Allatt, who came out of the condition in eight months, and actively raises awareness through the charity she set up, Fighting Strokes, which I urge you all to support.
The condition is becoming more common especially among young people and still very little research is carried out.
The media must raise awareness positively so people are more likely to carry out research here in the UK.
If we just report on people wanting to die, others won't want to get involved with research as it seems death is the end result of the condition.
In my opinion that is definitely not the case. With no offence intended, I hope laws stay as they are regarding euthanasia and assisted suicide.
H/T Bolton News

If my illness were to degrade me further, I would wish there to be options available to me that would safeguard those around me. When we take a suffering animal to the vet and they are put down we console ourselves by saying "it's for the best", yet too many able-bodied people want to control the lives and deaths of others...when it's time to go, then people need to accept it.
Alison Davis: Sat, 29 Sep 2012 17:50
I'm severely disabled myself, and I want to thank Mr Parkinson for his wonderfully positive approach to his father's disability. Having wanted to die for over 10 years, and been lovingly cared for throughout, I have come to realise that it is completely unfair that there are "suicide prevention programmes" for non-disabled people, but when it comes to those with severe disability, we seem to be automatically assumed to be "better off dead." I was lucky to be helped by people who acknowledged my equal humanity, and eventually they helped me see that what was needed was not "the right to die" but the right to live with dignity until natural death happens. Until then I have lots to do!
susan fisher: Sun, 19 Aug 2012 14:41
Praise God for your constant loyalty to God and His principles and commands. May God richly bless you as you continue to speak out for those unable to speak for themselves. Many people, when not given up on, trust God for healing and healing does come in time. I hope and pray your dad is among those allowed to live by the medical community. Speak out and others may live as well. Don't give him morphine or pain medicines if he can't breath or comes off the respirator. God will help you. He knows when a person's true time has come. Premature taking of life dishoners God our Creator. His ways always work best and to allow natural death is true dignity.
God be with you and for you and may this case bring many to life who would otherwise perish.
Dorothea M E Saul: Sat, 18 Aug 2012 16:38
My thanks to Gary Parkinson's son for a positive article about his father's life. Why are the public not given the opportunity to read this or hear it on the media ???As a retired nurse , with a son ,daughter in law, two cousins who are doctors and two daughters and a daughter in law, nurses., all against euthanasia, I remind the public that we all promise 'to do no harm to our patients' Of course we wish to have better' real hospice care' or good home care for a comfortable' end of life' when it comes for each person. This is possible and our society can pay for it if this is we really want . Please don't expect the medical and nursing staff to kill their patients or to withdraw fluids. Don't ask them to do what you the public would not do yourself. If you change the law you will open Pandora's box as happened with 'abortion for special cases', resulting now in ABORTION on demand. The elderly, disabled , vulnerable and terminally ill patients will be terrified to trust those 'caring' for them, if the law changes. We must improve our care of those dependant on us , not force doctors and nurses to kill them and ' get rid of the problem' Are we a civilised society or Not??? Thank God for all who do their best for their loved ones and patients let us support them in a practical way, giving help or accepting better use of our taxes for the health service.
Vivien Bell: Fri, 17 Aug 2012 17:41
Well done! What an encouraging article, and what courage to have faith in the future, and share it with others! eEveryone is made in the image of God, even if they are born - or become - severely disabled. This does not diminish their value and worth in any way, and there are many creative ways in which life can be extended to these people. There was an inspiring film made on the work of a German refugee neural specialist (Jewish), who wanted to minister in every way to soldiers with spinal injuries sustained on the battlefield (World War2). Supplies were limited as Britain was in financial difficulties at the time, but where there is a will, there is a way! This whole episode led to the inclusion of disabled people in the Paralympics! There IS a place for EVERYONE who is born, and it is our place to welcome them in, and show them that they were ultimately born to have fullness of life, no matter who they are, or what there circumstances are. GOD believes in us, so we can believe in eachother!
Colin Harrison: Fri, 17 Aug 2012 09:56
We need much more publicity about these positive stories to counteract the negative effect of the likes of Tony Nicklinson. My son Bram Harrison has had Locked-in-Syndrome since a bicycle accident 1998, twice as long as Tony, but he has never wanted to die, in fact he is always looking forward to new challenges. He did have a good article in The Independent in March 2012, but overwhelmingly the press dont see any milage in the headline "MAN WANTS TO LIVE". On a day when the BBC 999 Awards recognised the bravery of those dedicated to saving lives it is sad to see so much attention and sympathy poured out to someone who wants to forfiet his.
Sarah: Fri, 17 Aug 2012 09:49
Very encouraging article!
Dean: Fri, 17 Aug 2012 02:05
I respect your opinion, and your father's story is truly touching. But that doesn't invalidate the profoundly personal decision that other people can come to.

Let's let people author their own lives.
Robert Colquhoun: Thu, 16 Aug 2012 18:09
This story was carried by the Bolton News, but sadly more positive stories are picked up by the mainstream media.
Madeleine Stanford: Thu, 16 Aug 2012 18:03
How refreshing to hear these views from a family member. How come the mainstream media don't carry interviews like this?
Please enable javascript to post comments!
Our Position »
Live Issues »
Scotland »
FAQs »
Get Involved »
Donate »