Most people with 'locked-in syndrome' do not wish to die. 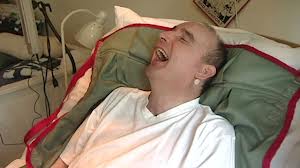 The media has a tendency to focus on the negatives of profound disability by giving a hugely disproportionate level of coverage to disabled people who wish to end their lives and very little to the majority who actually value their lives.

These good news stories have previously drawn attention to the fact that most people with 'locked-in syndrome' do not wish to die.

Locked-in syndrome hit the headlines after the experience of Tony Nicklinson. He went to court unsuccessfully to argue that his life had become so intolerable he should have the right to euthanasia and has since died from complications of his condition.

Richard Marsh recounts his ordeal in the Guardian, explaining that doctors wanted to switch off his life-support after a stroke. He could hear every word but could not tell them he was alive. He is now 95% recovered.

The BBC has also posted a video featuring the story of Mike and Wendy Cubiss.

Mike had a massive stroke a couple of days after a holiday which left him paralysed and unable to talk.

He is able to communicate using his eyes by looking at letters on a board. Wendy has become expert at interpreting her husband's thoughts. Given a little more time, he can also use a computerised voice system.

Wendy described how it all began:

'Mike was forty… incredibly young. It was very bleak really but I had to carry on and the boys kept me going. They were only aged 12, 10 and 8 and I think the eldest one found it very difficult to cope with.'

When asked by the reporter if he had ever got to the point where he wanted to end his own life Mike answered, 'No, I never thought of any other way but to live.'

Mike and Wendy have had enormous support from friends, family and carers who come every day but the key to Mike's determination to live is his keen sense of humour, which is beautifully evident on the video itself (see above).

Says Wendy, 'He's still the same man and that was part of what I liked about him was his sense of humour and his sense of the ridiculous. He's not a vain guy.'

When asked 'Do you think Mike is happy?' she replies as follows:

'I think he is actually, yes. We can hear him laughing now as we say this but actually Mike is amazingly happy and I sometimes even am quite astounded how happy he is but he feels that this is better than being six feet under or better than being dead. He feels really good to be alive. He's seen the boys grow up and is continuing to see how life shapes really.'

Mike and Wendy want to send a message of hope that life with locked-in syndrome can be fulfilling.

Eddy: Tue, 17 Dec 2013 03:52
You can actually make a full recovery.....awful to spend 5 months on a hospital bed with two doctors standing over you making appalling remarks about pulling the plug though....trust in medics and nurses completely shot to pieces. If my family hadn't been there I'd have been given a morphine overdose under the guise of palliative care....actually heard them discussing this on 3 occasions when I was without a visitor. The pretence of 'care' when you are actually planning to kill.....god's my witness.
Please enable javascript to post comments!
Our Position »
Live Issues »
Scotland »
FAQs »
Get Involved »
Donate »