Mum, I love you 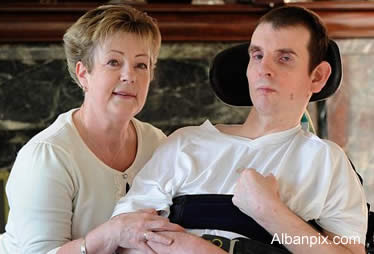 A 37-year-old paralysed man has spoken for the first time in nearly 20 years - and told his mum "I love you".

The news comes amidst pressure to change the law so that people in a similar position can have their lives ended by euthanasia.

Simon Ellis was told he would never talk again after being involved in a car accident in 1992.

He lost the use of his arms and legs, as well as suffering brain damage and two skull fractures.

But now, after being cared for at a Sue Ryder care home in Ipswich for 18 years, Mr Ellis has uttered his first words since the accident.

His mum, Diane Franklin, said: "We have been just using flash cards and we have been so pleased with the response.

"Since saying 'I love you', he has been saying his brother's name, Andy, and he also said Hilary which is his sister's name".

His mum added: "Every day we come in to see him someone comes up to us and says he has said something new".

She commented: "He is really getting there and it is amazing to see."

Laura Gill, from the Sue Ryder charity, said: "We are absolutely thrilled with the progress Simon is making and we hope his speech continues to improve with the help of specialists.

"It's fantastic to see him so happy, full of life and able to share his wonderful sense of humour."

In July 2010 a severely disabled woman called on other disabled people not to abandon hope for the future.

Marini McNeilly, who taught English and Spanish, was left paralysed by a series of strokes and can only move her face, head and, very slightly, her fingers.

There were times when Mrs McNeilly had little hope for the future and feared that she may never be able to communicate with people again.

But in an interview with The Times newspaper she called for other sufferers not to give up hope, saying: "Hope is the last thing you should lose."

With permission from the Christian Institute