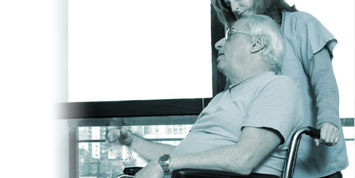 My father, Arthur Faraway, was diagnosed with terminal cancer in 1976 aged 69. It was discovered during surgical removal of his gallbladder. No treatment could be offered. Our G.P. urged us to take Dad on a good summer holiday as he only expected him to last 6 months. Mum, myself and my sisters all gave him much TLC, took him to Cornwall for a fortnight, and we, and his church, prayed hard. Dad had grandchildren to see grow and we dreaded losing such a lovely man, and could not bear to think of him suffering a painful end.

Six months came and went, and Dad was in better shape than when he left hospital. His routine check-up was favourable, so he went home and improved for another six months. He gained weight, had a rosy complexion, and regained all his former energy and then some.This went on for two years, at which point his oncologist told him he was a very lucky, and very healthy, cancer-survivor. My sister asked Dad's G.P. how Dad had cheated death, and he said "well, there are some things that are simply not in our hands". The cancer never returned, and Dad died of a stroke 13 years later at 82.


Up until then, as a young man I believed, with the careless thoughts of immaturity, that 'mercy-killing' would be a good idea. To give power to people to decide when to end their lives seemed to me to be a step forward. In the light of my father's case, I shuddered to think that he might have opted to end his life rather than put himself and the family through all the suffering which never came. He and all of us would have missed 13 very precious years. For this and a host of other reasons, I am now firmly against 'mercy killing'.

carsonsally@live.co.uk: Mon, 2 Jul 2012 09:44
So grateful for this revelation. It proves that death prognosis is NOT always correct and in fact, even when a diagnostic score tool is used, has been found wrong is 48%, Working on that logic, nearly half the people put on the LCP (death pathway) could have,, possibly, lived a considerably ltime. longer! Two Doctors can "SAY" that the patient will die in the next few days and this is entrance onto the pathway! Death will occure in a few days if fluids, classed as treatment, are withdrawn .Dehydration plus Diamorphine and Madazalem pump is a death sentance
Please enable javascript to post comments!
Our Position »
Live Issues »
Scotland »
FAQs »
Get Involved »
Donate »