A Bristol woman who launched a legal battle five years ago has died. 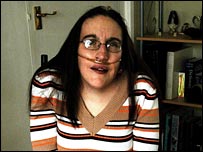 A Bristol woman who launched a legal battle five years ago to force doctors to end her life has died.

Kelly Taylor, who had Eisenmenger's syndrome and the spinal condition Klippel-Feil syndrome, died of heart complications at Frenchay Hospital on 27 February.

The 35-year-old had been campaigning for more than six years to change the law on assisted dying.

Eisenmenger Syndrome, a heart and lung condition, can develop in people born with a hole in the heart if it is not treated in infancy. Mrs Taylor also suffered with the rare musculoskeletal developmental disorder, Klippel-Feil syndrome.

In 2003, after waiting nearly ten years for a heart and lung transplant, she was told a match could not be found and was taken off the transplant list.

In August 2005, to end the ‘pain and misery’ of her condition, she attempted to starve herself to death as an act of voluntary euthanasia.

But after 19 days she was in so much pain she decided it was less dignified than her medical condition and began eating again.

In 2007, she was given a year to live and launched a legal battle to force doctors to end her life. She sought permission to receive a large dose of morphine to induce coma (and render her mentally incompetent) followed by withdrawal of food and fluids (as specified in an advance directive) with the intention of ending her life.

The British Medical Association and Care Not Killing both opposed the case at the time and she later withdrew it.

The BMA said: ‘While we sympathise with Mrs Taylor's situation, we cannot support her request for doctors to sedate her, to a state of unconsciousness, with the specific intention of ending her life. In our view, this would involve the doctors in assisting her suicide, which is both unlawful and unethical.’

I was quoted at the time as saying, ‘This is a very sad case but what is really needed is not a change in the law to allow lethal injections but access to the highest quality of palliative care to those who need it.’

Mrs Taylor’s relatives and family deserve our fullest sympathy in their loss, but the case also underlines two important things.

First, it exposes the real agenda of the pro-euthanasia lobby. Dignity in Dying, (formerly the Voluntary Euthanasia Society), backed the case at the time and have never withdrawn their support, and yet they claim to support assisted suicide only for people who have less than twelve months left to live and who are mentally competent. Kelly Taylor lived more than five years after she first brought her case and was seeking being starved and dehydrated to death after being rendered mentally incompetent. So just how elastic are their real demands?

Second, it shows how inaccurate doctors’ predictions of life expectancy can be. I have previously highlighted on this blog the cases of Lockerbie bomber Abdel Al-Megrahi, Great train robber Ronnie Biggs and Cambridge physicist Stephen Hawking whose have lived on for years after being given months to live. Kelly Taylor is another such case.

Lord Falconer’s sham commission on assisted dying recently recommended legalising assisted suicide for people with less than twelve months to live. And yet in just 2004/2005 leading doctors giving evidence to a House of Lords Committee on Lord Joffe’s Assisted Dying Bill revealed just how inaccurate such assessments can be.

'It is possible to make reasonably accurate prognoses of death within minutes, hours or a few days. When this stretches to months, then the scope for error can extend into years' (Royal College of General Practitioners, HL 86 Vol II, Page 80)

'Prognostication may be better when somebody is within the last two or three weeks of their life. I have to say that, when they are six or eight months away from it, it is actually pretty desperately hopeless' (Professor John Saunders, speaking for the Royal College of Physicians, HL 86 Vol I, Paragraph 118)

'A simple bit of practical evidence is one of the benefit forms that are filled in for patients assigned to a doctor thinking that the patient has six months to live. I would not like to count how many of these forms I have signed in my life for patients still living after a year, eighteen months or even longer' (Dr David Jeffery, speaking for the Association of Palliative Medicine, HL 86 Vol I, Paragraph 119)

In 2006 an article in the British Journal of Cancer looked at cancer specialists estimates of survival in patients who died with a median survival of twelve months. The paper, titled ‘Disarming the guarded prognosis: predicting survival in newly referred patients with incurable cancer’, summarised its findings as follows:

People affected by cancer want information about their prognosis but clinicians have trouble estimating and talking about it. We sought to determine the nature and accuracy of medical oncologists' estimates of life expectancy in newly referred patients with incurable cancer… After a median follow-up of 35 months, 86 of the 102 patients had died with an observed median survival of 12 months… Oncologists' estimates of each patient's predicted survival were imprecise: 29% were within 0.67–1.33 times the patient's actual survival, 35% were too optimistic (>1.33 times the actual survival), and 39% were too pessimistic (< 0.67 times the actual survival). The proportions of patients with actual survival times bounded by simple multiples of their predicted survival were as follows: 61% between half to double their predicted, 6% at least three to four times their predicted, and 4% no more than 1/6 of their predicted… Ranges based on simple multiples of the predicted survival time appropriately convey prognosis and its uncertainty in newly referred people with incurable cancer.

Predicting life expectancy in cancer patients is difficult enough. But as Ms Taylor’s case reveals, in those with other illnesses such as heart disease estimates can be wildly inaccurate.

‘Twelve months to live’ is not the ‘robust safeguard’ that pro-euthanasia campaigners claim it is. But, as in this case, they have never really shown any real concern about that in pursuing their agenda.