Brilliant article about British DJ with locked in syndrome 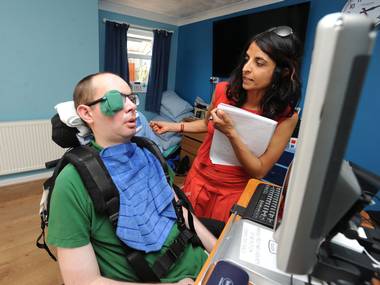 ‘Locked in, but still lost in music: UK's bravest DJ’ tells the story of Bram Harrison, 34, who suffered brain damage two weeks before his 21st birthday after falling head-first off his bicycle. He was left with locked-in syndrome and can move only his eyes and eye lids.

So he communicates with his eyes: looking up means yes, down means no, cross-eyed means don't know. He chooses letters and words by blinking at them on a screen, which his computer translates into the written and spoken word.

This allows him to easily respond to questions from his small army of committed carers about what he wants and how he feels and also to work as a DJ.

Not surprisingly the playlist for his Eye Life radio show takes weeks to put together but he still does it!

Several years ago a doctor asked him what they should do if, for whatever reason, his heart stopped. In other words, would he want to be resuscitated or should they let him die? He looked up immediately. He wanted to live then, just as he wants to live now.

His desire for a long, healthy, meaningful life may strike some as surprising. On his website, eyelife.org, he writes about the loneliness of being locked in and his desire to fall in love. But that does not mean there is no joy in his life. Far from it.

He loves seeing his family, especially his three nephews, and enjoys film and sport, especially Arsenal, whom he started to follow mainly to annoy one of his former nurses. Inspired by one his carers, he is now learning Polish.

Commenting on the case of fellow locked-in sufferer Tony Nicklinson, 57 – stricken since a 2005 stroke and taking a right to die case to the High Court – Harrison says ‘I've definitely not got the same view as Tony Nicklinson. I don't want people to think that locked-in syndrome is unbearable. I enjoy my rather limited life.’

Sadly it is people like Nicklinson and Martin, making up a tiny proportion of those with the condition, who inevitably attract most media interest and are given an international platform to propagate their views.

But in fact the overwhelming majority of people with severe disability – even with ‘locked-in syndrome’ – do not wish to die but rather want support to live.

There have been many other inspiring stories of people (such as Martin Pistorius and Matt Hampson) who with good support have been able to get to a position where they can see meaning and purpose in lives even in the face of substantial suffering. It would be wonderful if the media were to put more of their huge resources towards giving such people a voice.

It is assisted living we need, not assisted dying. Why don’t we see more media support for it?