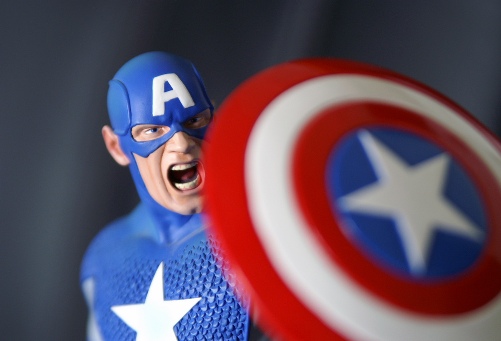 In May 2014, knowing that her terminally ill father had little time left and mindful that 'we have to make these 12 weeks count', Sophie Caldecott attracted media attention around the world after organising the #CapforStrat social media campaign to secure a screening of the new Captain America film for comic book fan Stratford. Writing for Verily magazine recently, Sophie reflected on her father's final illness; on the story of Brittany Maynard, the 29-year old who secured an assisted suicide under Oregon's law on 1 November; and on what it means to die with dignity:

By now, you've probably heard of Brittany Maynard, the 29-year-old with terminal brain cancer who has become an advocate for assisted suicide. For a brief recap, Maynard penned a now-viral op-ed for CNN, detailing the painful degeneration she faces as someone with brain cancer, and her rationale for deciding to take her own life on November 1 of this year.

You know the slow and painful death Brittany describes wanting to avoid, the suffering she does not want to inflict on her family? She may as well be describing my family's story, in many ways. My father, who was diagnosed with prostate cancer in 2011, went through that slow and painful death; our family experienced that suffering.

I can't deny that it is torture to look on the suffering face of a loved one and hold their hand as they stare into the eyes of death. I won't do injustice to the suffering Maynard, her family, and all those like them by suggesting otherwise. But living through a similar situation in all its grim reality has convinced me that assisted suicide is not the answer.

Like Maynard, the recommended treatments could only delay my father's cancer, not reverse it. Though he was older, he was young enough that the rest of his body was able to, as she puts it "physically hang on for a long time." In the end, he developed the morphine-resistant pain that she mentions. During his last few weeks, he suffered so much that we formed an unbroken relay by his bedside in the hospice, night and day.

The truth is that however accurately Maynard describes the horrors of a life ended by cancer, she has missed an important part of the picture. Despite his bleak diagnosis, there was never a good moment for my father to die. During his last years he suffered, yes, but he also wrote books, enjoyed a blissful family holiday in Italy, and danced on his daughter's wedding day, among countless more mundane moments, lovely for all their simplicity.

In the end, when the doctor gave us the news that he had approximately 12 weeks left to live, we launched a viral Twitter campaign to request an advance copy of Captain America: The Winter Soldier. As a lifelong comic book fan, he had been so disappointed not to be able to make it to the cinema, and the DVD release date would be too late. Marvel got in touch to arrange a special home screening of the film, and the stars of his favourite superhero films, along with hundreds of people from around the world, sent us pictures and messages of support. It was an extraordinary testament to the power of human empathy.

Assisted suicide laws generally apply to people with less than six months to live. When I think about the last six months or so of my father's life, I remember the companionship we shared throughout my pregnancy and labour—my fatigue and impaired mobility mirroring his own. I remember the jokes we made about not having control over our bladders, and the consolation we gave each other over our fears of what lay ahead. But most of all, I remember the way his eyes widened as I placed his first grandchild in his arms, and the tenderness with which he watched her grow as he declined. I know with more certainty than I have ever known anything that if he were still here he would tell you it was worth living every last drop of life for those moments.

Since I last wrote about my father for Verily, I have learned not to idealize the process of dying. Maynard is right in one way: A life ended by cancer is full of anguish for everyone involved. However, there is no "good" way to lose someone you love, and death never comes to us on our own terms.

The motto of the hospice where my father died was "believing every moment matters," evidence of the courage and compassion of palliative care at its best. Rather than cutting life short for fear of what is coming, we need to suffer with the terminally ill as long as it takes. When the morphine stops working, we must not rest until we find an alternative that does. The physical and emotional anguish of the person who turns to suicide has not been adequately addressed.

Was my father's death lacking in dignity? If losing the ability to walk and eventually talk is undignified, then yes. If catheters and oxygen masks and sponge baths are undignified, maybe. These things are expressions of the body's ultimate vulnerability, a total reliance on others. But to call vulnerability undignified is to allow ourselves to lose sight of the fact that there is beauty—and yes, dignity—even in extreme weakness, in the whole imperfect, messy, and glorious business of being alive.

Sophie was not surprised when her original post attracted a 'flood of indignant - even angry - comments on social media and on the article itself', and returned to the subject a day later . We heartily urge you to read her further thoughts in full:

I think it's very disingenuous to claim that you are not directly impacting my life if you are campaigning for this change in legislation; to accuse me of standing in the way of your personal freedom, without acknowledging that you are doing the same to me. You may think that I can happily ignore any changes in the law that I want to, that it doesn't have to concern me, but you're wrong. You're talking about making a radical change to the society in which I live, to the society in which I will someday die, and that is something that affects me in a very real way...

...The very week before my father died, a proposed change to British law allowing assisted suicide was being discussed in the House of Lords, and in a horrible twist of fate, the experience our family was going through made us a textbook case for the debate. Everywhere I turned, the press was full of it, and it felt like they were all talking about us. It was as if they were putting value judgements on the last few years of my father's life since his terminal diagnosis, crowding into my head and telling me I was selfish for being glad that assisted suicide wasn't an option so that we could have as much time as possible together without the added stress of having to consider an 'alternative' to him seeing life through to the end.

Sophie's original article for Verily was published on 27 October 2014 under the title 'Death With Dignity? Assisted Suicide Is Not The Answer', and is reproduced by kind permission of Verily and Sophie Caldecott. We are additionally grateful for permission to reproduce an extract from Sophie's follow-up blog, 'On assisted suicide, choice, and personal freedom'.


© Image copyright of Andy Roth and licensed for reuse under Creative Commons License 2.0

Doug: Thu, 1 Oct 2015 11:07
This good
Deborah Steel: Sun, 16 Nov 2014 10:12
Thank you so much for describing your experience of your father's death. Do you know what your father's thoughts were whilst he was suffering so much in his last few weeks? So many of us want to understand more.
Please enable javascript to post comments!
Our Position »
Live Issues »
Scotland »
FAQs »
Get Involved »
Donate »