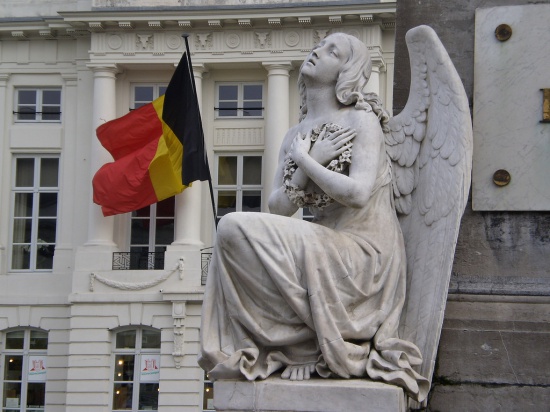 Here in the UK, seventeen year olds can't vote, they can't buy alcohol, and they can't marry without their parents' permission - although their parents are probably more worried about them having just reached the age where they can edge out onto the open road in a second-hand two door.

In Belgium, they can be administered lethal medication, and for the first time since the law on euthanasia was extended to include children in 2014, the regulatory commission has confirmed that this has indeed happened. It is worth noting that academic studies suggest that under-reporting of euthanasia in Belgium is significant, so we can't be sure that this is the first - in the eyes of the law - child to be lawfully killed. We can't be sure of anything much, actually - reports are thin on detail. This from The Telegraph: 'the underage patient, believed to be 17 years old, was described as "critically ill" but no further details were released.'

The death came hot on the heels of the US state of Washington disclosing that in 2015, the youngest yet 'participant' died under its assisted suicide law - a 20 year old. An adult in the eyes of the law, but a young person just three years older than their Belgian counterpart, the two separated by a line scarcely less arbitrary than that which in Oregon and Washington (and, had MPs voted otherwise one year ago, here) separates those whose suicides should be dissuaded or assisted, based on a six month prognosis.

The death also coincides with charity Together for Short Lives revealing a serious shortage of nurses dedicated to caring for and supporting the more than 50,000 children and young people in the UK who are expected to have short lives. Rather than addressing gaps in care and support provision which often feed despair and fear, proponents of assisted suicide look to places like the Low Countries for a new brand of compassion, but as well as quietly overlooking the causes of distress here, so they also overlook the many and varied causes for concern in Belgium - of which euthanasia for minors is only the tip of the iceberg.

But Wim Distelmans, the chairman of the euthanasia commission reminded the media that they cannot say for certain the actual number of euthanasia deaths. Distelmans stated:

'Remember, there could be some euthanasia cases carried out but which are not declared so we cannot say for certain what the number is.'

In January 2014, Dr Marc Cosyns, was quoted by De Standard news saying that he never reports his euthanasia deaths, even though it is a requirement of the Belgian euthanasia law.

The reasons doctors acceded to euthanasia requests - where there are explicit requests - continue to reach new diagnoses and concerns. We have seen the case of Mark and Eddy Verbessem, the 45-year-old deaf identical twins, who were euthanised in Belgium, after their eyesight began to fail. Or Nathan/Nancy Verhelst, whose life was ended in front of TV cameras, after a series of botched gender reassignments. Or the case of Ann G, an anorexia sufferer who opted to have her life ended after being sexually abused by the psychiatrist who was supposed to be treating her for the life-threatening condition. They are even practising 'organ transplant euthanasia' whereby people are despatched with a lethal injection so that someone else can use their organs. Meanwhile, almost half of Belgium's euthanasia nurses have admitted to killing without consent, despite the fact that involuntary euthanasia is illegal in Belgium and that nurses are not allowed to perform even voluntary euthanasia.

Belgian euthanasia practice is a basket case, but it began as a narrowly directed, 'reasonable' conversation, just as proponents consider themselves to be leading in the UK. The truth is that once the clear and natural frontier that is found in the state's not condoning or assisting suicide or euthanasia is breached, there can only be a forward march. The front line has reached Belgium's children. This is the inevitable consequence of legalising it for any category of people whatsoever because the same arguments of compassion and autonomy will be used as a lever to push the envelope once the general principle is accepted. It begins with the terminally ill and proceeds to the chronically ill. It starts with voluntary euthanasia then becomes involuntary. It starts with adults and leads to children.

If we want to keep British children safe then we must learn the lessons of history being played out across the English Channel. The British law that makes all euthanasia and assisted suicide illegal is clear and right. It does not need changing.