In CNK's tenth anniversary year, a fond farewell to retiring stalwarts is followed by renewal, as we welcome new Board director Dr Colin Harte 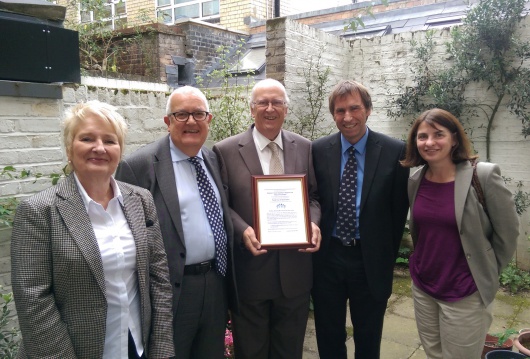 2015 saw both the Scottish and Westminster Parliaments reject assisted suicide by incredible margins of (respectively) 82-36 and 330-118. These resounding verdicts not only made any further legislative proposals unlikely until the end of the parliaments, but also made way for a shift in focus to the provision of better end of life care.

All of this allowed us to step back and consider Care Not Killing's ten years of fruitful opposition to uncontrollable, unethical and unnecessary legal change (CNK was founded in 2006 to oppose the Joffe Bill). It also proved to be an opportune moment for our Chairman Dr Brian Iddon (pictured, centre) and Advisory Group Chair Dr Andrew Fergusson (pictured, second left) to retire from the Board of Directors after long and dedicated service.

Ex-Labour MP Brian was CNK's founding Chairman and he returned to the role in 2012. Previously a reader in organic chemistry at Durham University, Brian was elected to the House of Commons in 1997 and served the people of Bolton South East until 2010. Andrew meanwhile worked as a GP in southeast London for ten years before moving into medical ethics, working in the UK and USA; he also served on the General Medical Council. Both Brian and Andrew appeared in the media and at debates for CNK; more importantly, they brought a wealth of experience to bear in steering CNK through the debates of recent years. We miss them, but wish them well in retirement.

The CNK Board, which continues to benefit from experience in medicine, law, public affairs and business, is now complemented by experience in personal care. Dr Colin Harte was, from 1989 until her death in 2013, full-time carer for Alison Davis. In addition to spina bifida and hydrocephalus, and using a wheelchair full time, she also had emphysema, arthritis, lordosis, kyphoscoliosis and osteoporosis. Told she would not live long and in constant pain, Alison developed a persistent wish to die and attempted suicide on several occasions. She later came to be grateful that she had not died, and indeed became a noted anti-euthanasia campaigner. Colin helped her in her charity work with disabled children in India and is himself an experienced speaker and writer. CNK will benefit hugely from the personal and academic experience Colin brings to the Board.

Care Not Killing continues to value the support of member and allied organisations, and from individuals who give generously of their time and resources to inform and realize our work. Our achievements have always exceeded what our resources warrant, and with a strong team and remarkable friends and supporters, we move forward ready for the next challenge.