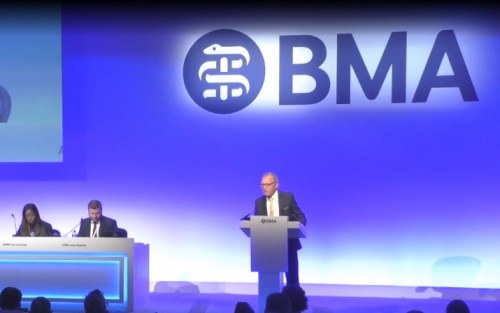 Three days after the RCGP announced it was to poll its members on assisted suicide, the British Medical Association's Annual Representative Meting (BMA ARM) reached its ethics section. The lead substantive item was

57 Motion by THE AGENDA COMMITTEE (TO BE PROPOSED BY ISLINGTON DIVISION): That this meeting notes the recent decision by the Royal College of Physicians to adopt a neutral position on assisted dying after surveying the views of its members, and:-

i) supports patient autonomy and good quality end of life care for all patients;

ii) recognises that not all patient suffering can be alleviated;

iii) calls on the BMA to carry out a poll of its members to ascertain their views on whether the BMA should adopt a neutral position with respect to a change in the law on assisted dying.

Speakers including Professor The Baroness Finlay, who noted the reference to the RCP poll. She addressed just some of its many deficiencies, including the unprecedented requirement for a supermajority to prevent a change in position, resignations from the RCP Councils own ethics committee and the fact that the College ultimately adopted the least favoured stance offered to members and fellows (neutrality drew only 25% support). Dr Kevin O'Kane noted that the Charity Commission had initiated an investigation into the RCP's conduct of the poll, conduct which had opened deep divisions.

Consultant Dr Ian Wilson noted that concerns about patients dying without the benefits of palliative care were rooted far more in access than the profession's clinical ability.

Dr Carole Cairns from Northern Ireland related her experience of caring for her mother and pointed to the grave risk of those needing care & support feeling they're a burden. She questioned the value of a simplistic poll in the wake of the BMA's 'most robust and thought-provoking research' on assisted suicide.

'On speaking about this motion you should not draw any conclusions about my views on assisted dying. You should, however, read plenty into it about how we make decisions, particularly on complex issues. If it was structured to engage complex views and opinion, then I would say it's worth spending money on. But it isn't that. Don't be hoodwinked into mimicking other organisations' mistakes. There are occasions when plebiscites are right. This is not one of them.'

Ethics Chair Dr John Chisholm later explained exactly why BMA decision-making on assisted suicide is not based on a simplistic poll, but rather research and considered debate. He wrote about this more fully with Anthea Mowat in the BMJ in February, at the time of the RCP poll.

Summing up, the mover Dr Jacky Davis - a Dignity in Dying Board member - asked of opponents: 'why don't you want the question asked?' Successive speakers had been clear that their issue was not with whether the question was asked, but how.

The motion was put to RB (Representative Body) in three parts:

The ARM last considered assisted suicide in 2016, when an ethics motion to move the BMA to neutral was defeated 198-115. The votes at this ARM do not change BMA policy, which remains clearly opposed, but will now cause the BMA to consider the practicalities of polling members' views.

Doctors: an obstacle to be got out of the way.


Image: a screengrab from the ARM livestream