'For me personally, I am just so grateful that there wasn't a change in the law' 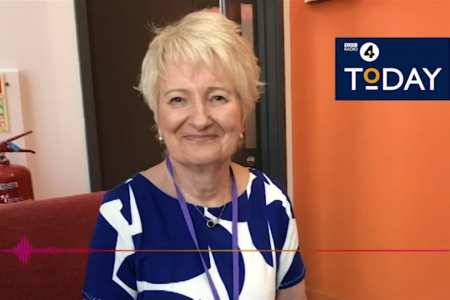 Asked by John Humphrys on Radio 4's Today programme whether she ever considered, or discussed with her husband, assisted suicide, Nola noted that on one occasion, Tony said: 'I don't think I can do this anymore.'

'that was one fleeting moment, and for me personally, I am just so grateful that there wasn't a change in the law because I feel that if there was, I wouldn't have been able to have the trust in his medical staff that I did.'

'The duty of the law is to protect, and my real fear is: my husband was vulnerable at that stage. If those protections weren't there, what would have happened? I fear that the examples that we see around the world, that... you cannot ultimately protect those who are vulnerable and at risk.'

Interesting, Humphrys - known to be in favour of a change in the law - put to Nola that:

'The point of physician-assisted suicide is of course that you have, yourself, to make that decision.'

His intention was to assert that it would be the individual's choice as to whether they died by assisted suicide. Leaving aside the grave issues of coercion and internalised pressures, Humphreys was inadvertently entirely right - in a separate way: individuals, once eligible under the law, would have to face the decision. Live on, a 'burden' as a majority of assisted suicide participants in Oregon and Washington consider themselves, or die. Nola and Tony were able, with their family, to enjoy precious time without this spectre hanging over them.

Listen to Nola speaking on Radio 4: