Assisted suicides in Oregon hit 105 in 2014: extrapolated for a UK-sized population, this would represent almost 1,700 deaths here 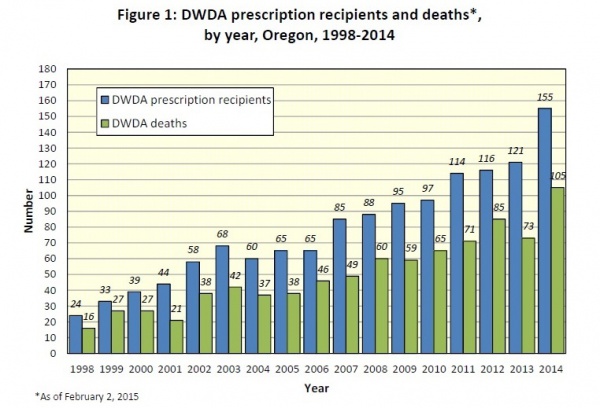 The figures for assisted suicide in Oregon in 2014, released this month, revealed that deaths under the 'Death With Dignity Act' have breached 100 for the first time. The state, whose population is barely a 16th of the United Kingdom's, has seen a 556% rise in the number of those being helped to end their own lives legally since 1998, and practice there continues to demonstrate that assisted suicide laws envelope ever greater numbers of people facing end of life decisions. Indeed, 105 is a provisional number: fully 155 prescriptions were made last year, and the total numbers of deaths in recent years have later been revised up as further reports are received, with 2012's 85 deaths originally being reported as 77.

What do the figures for 2014 tell us? They paint a picture of a state of affairs we cannot possibly want for ourselves.

'Of the 155 patients for whom DWDA prescriptions were written during 2014, 94 (60.6%) ingested the medication; all 94 patients died from ingesting the medication.' The report's authors, like most assisted suicide proponents, insist on the term 'medication', failing to appreciate the paradox even when they twin this with 'lethal'. Besides these 94, and the 37 who died without ingesting the 'medication', there are 24 patients who received prescriptions under this closely regulated, well-monitored system in the course of a 12-month period about whose 'ingestion status' and indeed continued existence we know precisely nothing. Indeed, this is hardly surprising: no healthcare provider was present for 81 of last year's reported assisted suicides (that's 80.2%, in contrast to the 1998-2013 average of 44.9%).

On top of the 94 patients who received and ingested their prescriptions in 2014, 'eleven patients with prescriptions written during the previous years (2012 and 2013) died after ingesting the medication during 2014.' Proponents, including those in the UK who cite the DWDA as a model for their own legislative plans, make much of the concept that such laws are for those already nearing death, yet in 2014, at least one patient died 439 days - more than 14 months - after their first request was made and we are reminded that at least one patient had previously gone 1009 days - almost three years - between first request and death.

This may well be because Oregon takes an increasingly broad view of what it is to have been 'diagnosed with a terminal illness that will lead to death within six (6) months'.

Alongside these, chronic lower respiratory disease (e.g. emphysema and bronchitis; 3.8%) and heart disease (2.9%), there were 69 patients presenting with 'other illnesses'. These made up 8.6% of cases, up from the 1998-2013 average of 5.9% and included - but we must pause. The reports says 'Includes deaths due to' which belongs to a popular class of obfuscation belying the fact that death is of course in fact due to ingestion of secobarbital, pentobarbital, phenobarbital, and/or morphine. These other illnesses - and here we bear witness to Oregon's broad interpretation of the law - include:

The rise in the number of prescribing physicians has never kept pace with that of assisted suicides. Eighty-three physicians wrote 155 prescriptions during 2014, with at least one physician writing 12 prescriptions. The median duration of patient‐physician relationships was 19 weeks, and at least one doctor-patient relationship was of a single week's duration. Only 3 patients, out of 105, had been referred for psychiatric evaluation - 2.9%, down from the 5.9% average for 1998-2013.

While most patients still died at home, those 94 cases constituted 89.5%, a fall from the 1998-2013 average of 95.3% reflecting the rise of assisted suicides in 'long term care, assisted living or foster care facilities' (8 patients, an increase to 7.6% from 3.9%). This subtle shift reminds us, in particular, of moves in Switzerland to allow for assisted suicide in elderly care homes.

Referring to reasons given for requesting assisted suicide, the report states that:

'As in previous years, the three most frequently mentioned end-of-life concerns were: loss of autonomy (91.4%), decreasing ability to participate in activities that made life enjoyable (86.7%), and loss of dignity (71.4%).'

These are all, it should be noted, existential concerns which the state has deemed it appropriate to respond to with lethal 'medication'. Less than a third (31.4%) cite inadequate pain control, but 40% - as in previous years - do cite not wishing to be a 'burden on family, friends/caregivers', while 4.8%, up from the 1998-2013 average of 2.9%, were mindful of the financial implications of treatment. Here we come upon the dilemma presented to Barbara Wagner, Randy Stroup and far too many others, and we perhaps get a further glance if we look at health insurance.

This admission could be described as coy, so let us be clear. In the year when the number of Oregonians undergoing assisted suicide breached 100 for the first time, we have seen a clean flip: previously, a clear majority were covered by private health insurance (62.9-35.5), but last year, this was reversed with those on Medicare, Medicaid or other Governmental insurance in the majority (60.2-39.8). Why do we note this?

'Barbara Wagner had recurrent lung cancer and Randy Stroup had prostate cancer. Both were on Medicaid, the state's health insurance plan for the poor that, like some NHS services, is rationed. The state denied both treatment, but told them it would pay for their assisted suicide. "It dropped my chin to the floor," Stroup told the media'

Oregon's law is bad for Oregonians; bad for the people of England and Wales who are presented with Lord Falconer's Bill; and bad for the people of Scotland presented with Patrick Harvie's Bill. When we sanction assisting suicide for existential problems, we fail vulnerable people and abdicate moral authority. Let these figures - which would translate to 1,692 deaths in the UK* - remind us that we must recommit to care and support, not a counsel of despair.

Read the official report for 2014 in full