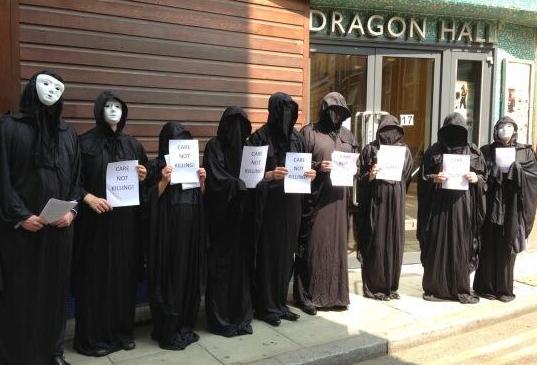 Australia's 'Dr Death' Philip Nitschke visited the UK last week and held a 'workshop' at Dragon Hall in London, providing instruction in how to commit suicide. About 150 people attended.

Not surprisingly, the event evoked protests and some publicity.

In the week before Nitschke arrived, CNK Campaign Director Dr Peter Saunders wrote to both Home Secretary Theresa May and London Metropolitan Police Commissioner Sir Bernard Hogan-Howe advising them about his visit and informing them that his workshop would be in breach of the Suicide Act 1961, under which it is an offence to 'encourage or assist' suicide.

The Act does not require that a suicide is actually carried out in order to for a prosecution to take place.

Quite possibly as a result of these letters, Nitschke was briefly detained at Gatwick airport but was eventually let in, presumably with the permission of the Home Secretary.

The police did not attend the workshop but referred the matter to the Crown Prosecution Service who decided that an investigation was not necessary.

At his workshop last Tuesday, Nitschke - who is on public record as supporting suicide for 'the depressed, the elderly bereaved, (and) the troubled teen' - gave advice on the sourcing, supply and use of barbiturates, nitrogen and other means that people could use to kill themselves.

A 2010 report demonstrated that coroners were aware of 51 Australians who had died from an overdose of Nembutal, a lethal barbiturate that Nitschke has promoted since the late 1990's as 'a peaceful way to die'.

But this fact seems to leave Nitschke unperturbed.

When previously confronted with the fact that 14 of the 51 were Australians in their 20's and 30's and only 11 of 38 investigated were known to have suffered chronic physical pain or a terminal illness he responded that 'there will be some casualties'.

Currently, Nitschke is the subject of an inquiry by the Australian Health Practitioners Agency (AHPA) in connection with an entity called 'Max Dog Brewing' which he has set up in order to sell nitrogen cylinders via his 'Exit International' website to people who wish to end their lives.

'Max Dog Brewing' is a business name for the company Northern Analytics Pty Ltd which has 'Philip Haig Nitschke' as its sole director.

Its website claims that nitrogen cylinders can be used for home brewing (nitrogen produces the bubbles in stout) but Nitschke has admitted on Australian national media that they can equally be used to commit suicide and there are much cheaper sources of the gas available for brewers.

Nitschke has thus far not responded to twitter messages asking him: "How many nitrogen cylinders has your Max Dog Brewing DIY suicide business sold to members of the British public?"

According to the Newstalk ZB in New Zealand, however, 'Max Dog Brewing' has already sent shipments to both New Zealand and the UK.

So here we have a man who travels the world running 'workshops' in order to give information to people in order that they can commit suicide.

He tells them where they can obtain barbiturate drugs and sells kits for storage of the drugs and for measuring their concentration.

And he sells nitrogen cylinders via a company he has set up for the purpose along with the necessary kit to deliver the gas.

Quite why this does not amount to 'encouraging and assisting' suicide is a mystery.

What will it take for the Home Secretary, the Police and the Crown Prosecution Service to do something about it - the first barbiturate or nitrogen suicide of someone in the UK making use of his information and equipment?