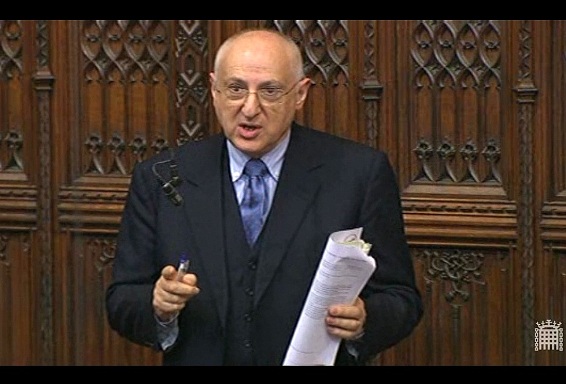 Lord Carlile of Berriew (pictured):I do not believe that anyone in my family has had a house call from their general practitioner in the 21st century, but it used to be very common... [Lord Carlile's father, a doctor] used to place his rounds in two columns: one was the calls that had been taken by the surgery—people who were ill and wanted the doctor to call—and the other was what he used to call, perhaps slightly unattractively, his "chronics". His "chronics" were patients he visited on a periodic or regular basis. Some of them became friends to him and he knew all about their lives. He knew about the progress of their illness and about their domestic circumstances. He knew whether their children cared for them or took any interest in them. He knew whether they were poor or affluent and was able to ensure in the terms of those days that whatever statutory care was available was provided. In other words, he and doctors like him had a relatively intimate knowledge of their patients.

I know that it is dangerous to be nostalgic about medicine although, if we look at the state of the health service today, perhaps nostalgia is decent evidence, but when we look at the relationships that such doctors have with their patients, it is undoubtedly the case that they have, and had, a body of knowledge on which to base their diagnosis. We are not talking about diagnosing measles. We are not even talking about diagnosing some extremely unpleasant diseases; we are talking about diagnosing if and when someone is going to die... In closing, my suggestion to your Lordships is that if we are to have this legislation and if the system is to be safe, we must have one in which the gateway is a strong gateway and not merely a flimsy wicket. I beg to move.


Lord Cormack: I remember as a young Member of Parliament in Staffordshire talking to a rural general practitioner who had been there for many years. He made the point to me—I have quoted it before—that a doctor can only truly know his patient if he knows him in his home as well as in the surgery. I know that things have changed a lot since then but I treasure my relationship with my general practitioner—it is one of the most important relationships that I have. I like to feel that I can talk uninhibitedly to him, and indeed I can.

It is very important that we avoid falling into a trap. Because of the widespread reluctance among the medical profession to support the Bill, we could fall into the trap of certain doctors being available for hire.

Therefore, if it, or a Bill like it in the next Parliament, is to go on to the statute book, the safeguards must be real, comprehensive and absolute. If a doctor is to sign a document, that should happen only after lengthy conversations with the patient concerned—after a real discussion. I would like to feel that during that discussion the doctor, whatever his or her personal views, can play devil's advocate and point out all aspects of this ultimate decision that the patient is on the verge of making. However, that can happen only if there is a real knowledge of the patient and a proper relationship between the doctor and the patient.


Lord Empey (UUP):I want to speak on this issue because I feel that the Achilles heel of the whole Bill is that it is built on sand. It works only on the assumption that the medical profession will deliver it, whereas it is obvious to most of us that the vast majority of the medical profession do not want to deliver it. That leads us to what may be the essential contradiction or conflict in the amendment. A number of noble Lords have said that specifying six months [minimum relationship between doctor and patient] would be an overburdensome requirement. Therefore, we have the dilemma that either you have a medical practitioner who knows the patient, knows the condition and knows how that patient is likely to react to certain drugs, or you have a complete stranger who comes in and makes a judgment on the spot, having read a medical file. I fear that a rent-a-doctor procedure will develop and will distil down to those who are prepared to do it, and that, in my view, will create a whole series of new problems.

Therefore, looking at the modern-day NHS and all the pressures that it is under, to some extent we are adding a further pressure without the active support and consent of the medical profession.


Baroness Cumberlege (Con):Professionalism is such an important element in the work of all those people who work in the NHS. Professionalism is indicated by the values, behaviour and relationships that underpin the trust that the public have in doctors, nurses and other clinicians. One reason why I am against the Bill is that I think it is so damaging to the medical and other professions... The commitment of the people in that service is outstanding. We know that doctors are the most trusted of all the professions. The trust is there because we know the intention of those people in treating us. We know that they come committed to cure, to treat, to alleviate pain and to be compassionate. The Bill goes against that.


Further highlights from the Falconer Bill's second day in committee: