4,620% increase in Belgian euthanasia cases in ten years since legalisation 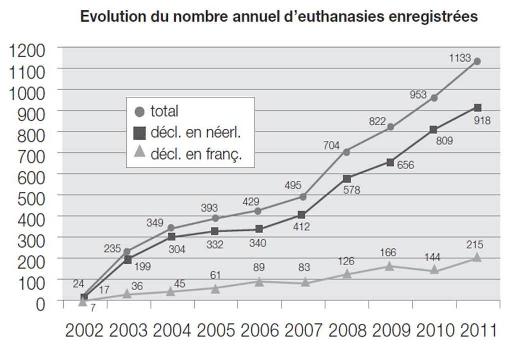 We have previously highlighted the rapid escalation of euthanasia and assisted suicide cases in the Netherlands, Oregon and Switzerland in recent years but Belgium is eclipsing all of these countries in the race to become the 'world leader'.

The Federal Control and Evaluation euthanasia (FCEE), in publishing the data, is now considering to extend the right to citizens who suffer from degenerative mental illnesses like Alzheimer's and also children.

A recent FCEE report on euthanasia in Belgium on 2010 and 2011, unfortunately available only in French, details the longer term trends since legalisation.

The upper line in the graph (pictured) is the total of euthanasia cases reported to the commission and shows an increase from 24 cases in 2002 to 1,133 in 2011 - a stunning overall increase of 4,620% in just ten years!

It is important to note that only acts which intentionally end life using barbiturates (Article 2 of the law on euthanasia) meet the legal definition of legal euthanasia so these figures do not include people killed by deliberate overdosage with morphine, withdrawal of treatment with the explicit aim of ending life or 'terminal sedation' with the aim of hastening death.

We know from the Netherlands that these other ways of ending life have also increased dramatically in recent years.

Over the last two years 75% of euthanasia cases in Belgium were for cancer (including all malignancies), 7% were for progressive neuromuscular disorders (multiple sclerosis, amyotrophic lateral sclerosis, Parkinson's disease, etc) and 18% were for 'other conditions'.

194 cases over the two years (9%) involved patients whose deaths were 'not foreseeable in the short term' and 2% of cases involved unconscious patients who had earlier signed advance directives.

In the vast majority of cases (99%), death was produced by inducing deep unconsciousness first with barbiturates (usually thiopental) followed by an IV injection of a paralyzing muscle relaxant (usually norcuron or tracium).

The Committee in its report emphasized the importance of 'easy availability of products needed for euthanasia' and considered that the medical school curriculum and postgraduate education sessions should include training on 'the proper implementation of euthanasia'.

It seems that euthanasia has now been accepted as part of normal medical care in Belgium.

The lessons are clear. Once euthanasia is legalised steady escalation follows along with a change in the social conscience so that it rapidly becomes accepted as normal.

With new bills about to be debated in the Westminster and Scottish parliaments Britain should take warning.