A common theme in analysis of the Marris Bill debate throughout the day and since has been the failure, or inability, to defend the Bill and its principles 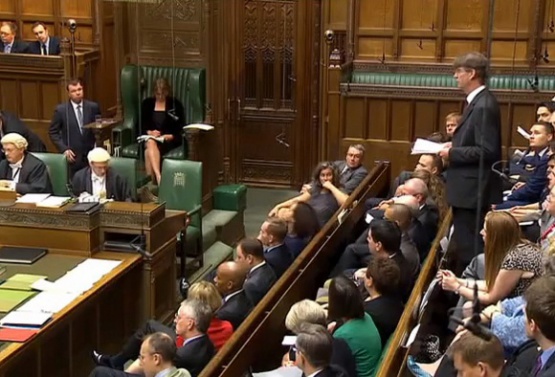 On the term 'assisted dying'

Will the hon. Gentleman clarify something that has been bothering me? He has called this Bill the Assisted Dying Bill but there is not a person in this room who would not assist the dying. In the interest of clarity, why did he not call it the assisted suicide Bill?

It is quite simple: it was called the Assisted Dying Bill in the House of Lords. I refer hon. Members to the Bill's long title, which is often overlooked:

"A Bill to enable competent adults who are terminally ill to choose to be provided with medically supervised assistance to end their own life."

Advocates of a change in the law have stubbornly refused to acknowledge that what they call 'assisted dying' is in fact assisted suicide. Mr Marris deserves credit for (a) not seeking to defend the substance of the indefensible term, and (b) acknowledging that the Bill seeks to help patients 'end their own life'.


On patients feeling a burden

To say that we hope that they will not feel a burden is not a reassurance, because hope is not enough. There is evidence that under the Death with Dignity Act in Washington state, 59% of people who went down this route indicated that they were doing so because they felt that they were a burden on their family and friends. In Oregon, which my hon. Friend refers to as the model for the Bill, that figure is 40%. This is unacceptable.


On the role of the High Court

On the High Court judge's agreement, what independent inquiries does the Bill provide for that judge to make?

...the Bill is totally silent about what inquiries should be made by the court on whether an order should be made. I intervened on the hon. Member for Wolverhampton South West (Rob Marris) on that point, and he replied that it was a matter for the court. I venture to suggest that when one is talking about whether or not a declaration permitting assisting dying is to be made, there should be strong guidance in the Bill on how the court is to make that decision. In other words, it looks very much like a rubber-stamping operation, which cannot be right.


On medical and disabled opposition

Can my hon. Friend tell the House why he thinks that so many disability organisations and the British Medical Association are opposed to the Bill?

Many disability organisations appear to think that this Bill has particular relevance to those with disabilities, but it does not. Disability is not an illness—it is rather old-fashioned to suggest that it is—and disability is certainly not a terminal illness. Despite repeated requests from its members, the British Medical Association has refused to debate this issue since 2012, and it has refused to poll its members. That is regrettable. In that context, The British Medical Journal editorial supports the Bill.

Mr Marris's sweeping statement that 'disability is certainly not a terminal illness' will come as a surprise to many disabled people, disability campaigners and disabled people's advocates. As for the stance of the BMA, Mr Marris's answer suggests he belongs to the school of thought claiming that 'we must have the debate' - at every possible opportunity, just in case the mood has crept sideways, just until a 'yes' is supplied. He might, though, have done well to consider the more recent consultations of the RCGP and APM. His need for stances to be subject to what we might call 'constant democracy' does not stop him being impressed by the stance of the BMJ, decided by its small editorial team and not its readership*.


On the difficulties of prognostication

My hon. Friend, like me, is a solicitor, and she will know that professionals commonly give advice on a balance of probabilities. That is the same for medical professionals. On the gross statistics, when errors in prognosis occur for the terminally ill, it is usually an overestimate of life expectancy.

On balance, the House would appear to have taken the view that a 'balance of probabilities' was insufficient.


On the reality of assisting a suicide

I held two public meetings, including one at the Birmingham Medical Institute. This part of the Bill worried the medics most and they were deeply opposed to it. They said, "If I am the attendant medic, what do I do if the person starts choking? Do I intervene?" They felt that it put them in an absolutely impossible situation. What is the answer to that?

That has not been the experience in other jurisdictions.

Not surprisingly, more than half the people polled think that assisted suicide involves no pain or discomfort. Well, assisted suicide can take two forms. The first, which this Bill says it advocates, is as follows. The person is given a powerful medication to stop them from being sick. That is because the barbiturates that are used to kill them are a powerful emetic. The urge to throw up is strong and can be distressing and uncomfortable. The barbiturates are then dissolved in a tumbler full of water and have to be drunk. It takes between one minute and 38 minutes until the person falls into a coma. In around 7% of cases, the person suffers from vomiting or spasms. In one in every 10 cases there can be problems with administering the barbiturates. In Oregon, it takes, on average, 25 minutes for the person to die. But the longest period before someone died was four days. In addition, in about 1% of cases, the person has woken up.

In the Netherlands, where an injection is administered to end life, it normally takes the form of thiopental or similar to put the patient to sleep followed by pancuronium, which is used to kill the person. Most terrifyingly of all, the person at this point is completely paralysed so cannot communicate if they are still awake or in distress. They then suffocate to death. How can either of those be described as a dignified death? That is not putting someone to sleep or easing their passing. It is wrong to say that it involves no pain or discomfort and it is not necessarily quick—it is up to an hour on average before the person dies.


On the Bill's every aspect

The Bill's proposer having failed to defend key aspects of the Bill, Fiona Bruce (Congleton) (Con) took the draft legislation apart, laying bare its deficiencies for the benefit of the House:

The hon. Member for Wolverhampton South West (Rob Marris) says that there has been a lot of misunderstanding about the Bill. There is no misunderstanding at all: the Bill would authorise doctors to provide a lethal substance for people to kill themselves with. That substance is not a "medicine", as the Bill disingenuously describes it, but a poison. No wonder doctors oppose it, and we in this House should do so too.

The hon. Member for Wolverhampton South West says that the Bill sets out a clear procedure with multiple safeguards. What clear procedure? What safeguards? Let us look at the Bill. It states that doctors must be satisfied that a patient has a settled and voluntary intent to end his or her life. How should doctors be satisfied that the intent is settled? The Bill does not say. Would they need to see the patient once or twice, or over what period of time? The Bill is silent. What steps should doctors take to be satisfied that the intent is voluntary, and that there is no coercion behind the patient's request? The Bill is silent. Given that Action on Elder Abuse reports that there are over half a million reported incidents of physical and emotional elder abuse in the UK each year, the Bill should be clear on that critical issue, but it is not.

The hon. Member for Wolverhampton South West speaks of multiple safeguards. Where are they in the Bill? I do not see them. Does he mean the provision that the decision should be referred to a High Court judge? If this was not so serious, it would be laughable. The judge would not have to meet the patient; they would only have to confirm the doctors' decision, and in a time frame of 14 days, making independent scrutiny all but impossible. Absent will be the detailed, rigorous examination that the family court gives to life and death issues, such as turning off a life-support system. Gone will be the investigative powers of the Director of Public Prosecutions under the current legislation to rigorously investigate cases of assisted suicide referred to him. Removed will be the strong deterrent against malicious behaviour that the current law provides.

Vulnerable patients would be left in a weaker position than they are now. The inclusion of a judge to effectively countersign a form confirming the doctors' decision adds no protective value whatsoever. But wait; here in clause 8 is a provision that would allow the Secretary of State to issue at some future date—not before we have passed the Bill—a code of practice. A code of practice would relate to such critical matters as assessing a patient's capacity or what counselling should be given, or recognising that depression might impair a patient's judgment.

In other words, the Bill says to us, "Parliament, decide now and sign this blank cheque, and at some future date as yet unknown some safeguards may be considered." That is wholly unsatisfactory. That will be too late. The deed will have been done. We will have changed the law. We will have crossed the Rubicon, from killing people being illegal to killing people being legal. That is not doing justice. We are here to protect the most vulnerable in our society, not to legislate to kill them. This Bill is not merely flawed; legally and ethically it is totally unacceptable and we must reject it.