Alison Davis vivdly recounts her decision not to end her life... 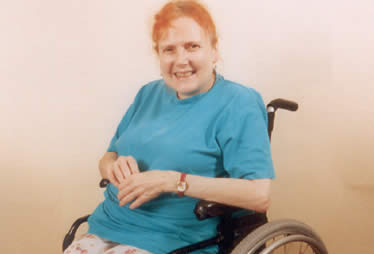 An extract of Alison's story

The most compelling argument I can present against legalising assisted suicide is my own experience. I have suffered a lot of pain throughout my life, and now need increasing doses of morphine, but even that doesn't always alleviate the pain. In addition to spina bifida and hydrocephalus, and using a wheelchair full time, I also have emphysema, a breathing problem that makes me susceptible to chest infections, arthritis, lordosis and kyphoscoliosis - causing my spine to twist out of shape in every possible direction, and osteoporosis - brittle bones, which has caused my spine to collapse and trap nerves. When the pain is at its worst I can't move or think or speak.

About 20 years ago pain of various sorts compounded to made me feel I wanted to die. At that time, doctors believed that I did not have much longer to live. Over time, my desire to die became a settled wish and it lasted about ten years. During the first five of those years I attempted suicide several times.

A few of the times were really "cries for help." I became ingenious at finding ways of hurting myself to add to my already severe spinal pain. My friends went through the house removing sharp objects (I can clearly remember through the mental haze eating scant meals with a spoon because all the knives had been moved), but then I would use pins, needles, even paper clips and sharpened pencils to open up the scars on my wrists caused previously by slashing them with a knife.

Some of the attempts, however, were serious and I tried various methods: large overdoses of various drugs and cutting my wrists seriously. I was determined to succeed then, especially on one occasion I particularly remember. I had taken a large overdose of painkillers and cut my wrists badly with an old rusty penknife which had escaped the general removal of sharp objects. I then drank a whole bottle of Martini, lay down in bed, cuddled my favorite teddy bear and waited to die. Fortunately for me (at the time I thought most unfortunately) my friend Sue arrived shortly afterwards.

My door was never locked at that time and she let herself in, found I was losing consciousness and called the emergency services. I was taken to hospital and treated against my will. The doctors waited until I lost consciousness then treated me anyway. If euthanasia had been legal then, I would have requested it with no hesitation at all, and if Living Wills had been legally binding, I would certainly have written one, refusing all life saving treatment. I would have satisfied all the supposedly "strict criteria" which pro-euthanasia groups want, and which are mandatory in places where euthanasia or assisted suicide is legal.

It took my friends, and particularly Colin, my full time assistant, many years to persuade me that my life did have value. Their efforts and a trip to India in 1995, during which I met with disabled children, who I later began to support financially, helped to turn my life around. After that trip I said to Colin "Do you know, I think I want to live." It was the first time I had thought that for over ten years.

Had euthanasia or "assisted suicide" been legal I would have missed the best years of my life. And no one would ever have known that the future held such good times, and that the doctors were wrong in thinking I didn't have long to live.

Some years ago I read a booklet by a young British medical doctor, James Casson, who was dying of cancer. He titled his book "Dying: The
Greatest Adventure of my Life." I think there is also a place for a book entitled "Living: The Greatest Adventure of my Life." My life has been full of pain and suffering, true. But it has also been one long adventure, with great highs and great lows. I think my eventual death will also be an adventure - but for now I'm content to wait for that particular adventure to come naturally, in its own time.