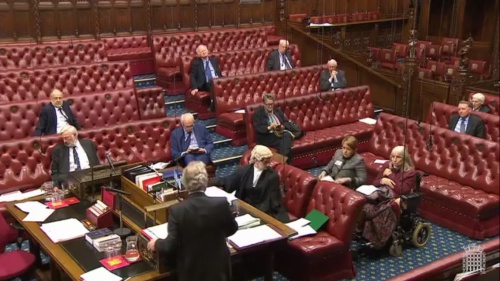 There are many informed and eloquent speakers in the House of Lords, and the short debate on assisted suicide on Monday 7 March brought out two dozen. It is notable that none were new names: the Jay debate was called not in response to any real developments, or because of a new drive for change in Parliament, but simply because advocates for assisted suicide wanted to give their failing campaign a boost.

Lords Falconer and Warner have previously put (failed) bills before the Lords, while Lord Glasgow and Lady Jay have both in the past instigated similar debates to this one. The piquancy of former archbishop Lord Carey's conversion to support euthanasia has dulled, and it was hardly surprising that Baroness Meacher should again speak, given that she is chair of the former Voluntary Euthanasia Society, now 'Dignity in Dying'.

To ask Her Majesty's Government what assessment they have made of recent legislation on assisted dying in North America; and whether those laws provide an appropriate basis for legislation in England and Wales.

Given that the new laws in California, Colorado and the District of Columbia are closely modelled on that of Oregon - in effect since October 1997 - the question was rather lacking in sense (although of course that was never the point.) It would also seem that Baroness Jay missed part of September 2015; she told fellow peers that 'since 2015, when... a Bill in the House of Commons... failed, there has been very little opportunity to reopen the question of changing our law.' The Bill didn't fail - it was considered, debated and rejected in the elected house by a massive 330 to 118. Given that the Marris Bill was also modelled on Oregon, it really would seem that Baroness Jay should have had all the answer she could want.

Most contributors picked up on the deficiencies of the situation in Oregon and Washington; the Bishop of Worcester said that

Writing in the Wall St Journal, William Toffler, a doctor in Oregon, described how the law there has had adverse consequences for the doctor-patient relationship, and how a developing climate of 'secrecy' and 'fear' has worsened the situation of the most vulnerable.​

Disabled activists see it as a step towards a society that develops social and cost-related judgments about a person's quality and value of life, which then become inevitable factors in the conversation around eligibility for assisted suicide. That is why investing in palliative care, not offering legal assistance with suicide, is the only truly progressive way forward.

After the last debate in the Chamber I was told by a member of the public, as they looked me up and down, that I must have thought about killing myself many times. The answer is a resounding no, but I was shocked. I am resilient, but imagine if you are constantly told that you have no quality of life or you are persuaded that you are worthless.

The disability rights campaigner Liz Carr has said that, 'euthanasia denies the value of people who have illness or disability'. The noble and learned Lord, Lord Falconer, stated in his commission report that assisted suicide is not meant for disabled people, "at this point in time". If legislation in this area is passed, I and others like me are merely in the waiting room.

The Earl of Arran claimed that 'as the evidence from overseas continues to grow, our own reasons not to legislate become less and less convincing.' Much could have been said about Belgium, the Netherlands, and Switzerland, whose example assisted suicide advocates find embarrassing, but Lord Carlile of Berriew confined himself to the much-vaunted Oregon model:

My Lords, in my view, even official Oregon health division data show how dangerous this law is.

First, non-terminally ill disabled individuals are receiving lethal prescriptions contrary to the law. That is the evidence.

Secondly, in any given case, the certifiers of non-coercion and capability need not even know the person being killed. Furthermore, one witness may even be an heir with a financial interest in the death.

Thirdly, there is no reliable way of checking whether the death is a suicide, and therefore lawful, or administered by a third party and therefore unlawful.

Full euthanasia is being introduced by the back door in some cases in Oregon. In all, it is a dangerously unreliable law which contains unsatisfactory safeguards.

Speaking for the Government at the debate's close, the Advocate-General for Scotland Lord Keen of Elie (pictured, standing) responded early on to Lord Falconer's (pictured, top left) assertion that 'English law shows such an arrogant lack of compassion on this issue':

I certainly take issue with the suggestion by the noble and learned Lord, Lord Falconer of Thoroton, that this is "what everyone wants". It clearly is not what everyone wants; indeed, I notice that the contributors to this debate are almost equally divided on this very complex and difficult issue. There is no arrogance to be attributed to those who take one side or other of this demanding debate.

Referring to the premise of the debate - foreign legislation, he noted:

Of course, we are aware that assisted dying legislation has been introduced recently in some states of America... I simply note that while five states in the United States have adopted such legislation, 45, of course, have not.

As the Supreme Court said in the case of Nicklinson and Lamb, information from the few jurisdictions where assisted suicide is lawful is,

'sensitive to underlying conditions such as standards of education, the existence of long-term relationships between GPs and patients and other social and cultural factors, which are not necessarily replicated in the United Kingdom'.

So it does not necessarily follow that a law which operates effectively—allegedly—in another jurisdiction would provide an appropriate basis for such legislation in England and Wales.

Harking back to debate on the validity of the campaign term universally favoured by assisted suicide advocates, he said:

We should remember that "assisted dying" is not a term that exists in law. It is shorthand for two distinct things; namely, assisting suicide and euthanasia.

And in summing up opposition to assisted suicide, he made clear a question advocates avoid - because they cannot answer it.

Those opposed to change argue that any relaxation of the law would constitute too great a risk to sick and disabled people, and that safeguards would not necessarily give enough protection to vulnerable people who may feel pressure, whether real or imagined, to end their own lives... It is unlikely that the risk of vulnerable people feeling pressure to end their lives can ever be wholly eliminated or that every person who thinks he or she has a legitimate right to assisted suicide can be assisted.

Whatever provisions may be proposed, therefore, the real question is: how much risk to the vulnerable is acceptable in order not to deny those who would genuinely wish to be assisted to commit suicide the opportunity of an assisted death? That is a very difficult balance to strike and there are no simple answers, especially when those who are vulnerable are not necessarily easy to identify. Whatever the arguments for and against change, it is important that the ongoing debate should not lead those whose lives are affected by illness or disability to feel less valued.