World Elder Abuse Awareness Day (15 June) – A reminder to treasure, honour and protect the older members of our community

A reminder to respect and treasure the elderly 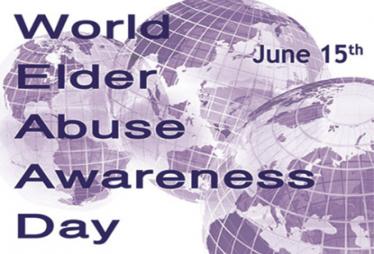 Older people are today being warned not to fall prey to bogus retail and investment schemes, after 78 rogue companies raking in more than £28 million from people were shut down in the last three years alone.

The companies scammed almost 2,000 investors between them and the oldest victim was aged 92, according to the Insolvency Service, which wound the firms up.

Issuing their warning on World Elder Abuse Awareness Day, campaigners said these scams often use high-pressure tactics or sell products at grossly inflated prices and conmen would cold call older people and refuse to hang up until they have closed a sale.

You probably won't hear about it from any UK media outlet but the World Health Organisation produced a fact sheet.

Until the advent of initiatives to address child abuse and domestic violence in the last quarter of the 20th century, abuse of the elderly remained a private matter, well hidden from public view.

Today, it is increasingly being seen as an important problem and one that is likely to grow as many countries experience rapidly ageing populations. It is predicted that by the year 2025, the global population of those aged 60 years and older will more than double, from 542 million in 1995 to about 1.2 billion.

A number of situations appear to put the elderly at risk of violence. In some cases, strained family relationships may worsen as a result of stress and frustration as the older person becomes more dependent. In others, a caregiver's dependence on an older person for accommodation or financial support may be a source of conflict.

Elder abuse takes place in many different settings - for example, the older person's home, care homes, nursing homes and hospitals. It happens when an older person's human rights and dignity are violated. It can come through financial scams (as above), physical attacks, sexual abuse, psychological abuse or neglect. The perpetrators are often in a position of trust and have control of the life of the older person.

Elder abuse can also include actions that many people might not consider. For example, physical abuse can include inappropriate use of medication or force feeding, emotional abuse can include treating an older adult like a baby or otherwise injuring his or her dignity, and sexual abuse includes any sexual contact with a person who is incapable of consenting.

Furthermore, older adults are particularly vulnerable to less common forms of abuse, such as neglect and abandonment, violations of rights to privacy, community support and information, and financial abuse, which is the most prevalent form of abuse among older adults.

Financial abuse is 'the illegal or improper use of an incapacitated or vulnerable adult or his resources for another's profit or advantage.'

This type of exploitation can take many forms such as forgery, misappropriation of cash or assets, abuse of joint accounts, or abuse of power of attorney. Signs of financial exploitation may include disparity between income and assets, unexplained or sudden inability to pay bills, inaccurate or no knowledge of finances, fear or anxiety when discussing finances, or unprecedented transfer of assets to others.

Financial exploitation of a vulnerable adult can occur without the elder's knowledge, by trickery, intimidation, or coercion, or when the elder is too confused to give informed consent.

A slight majority of financial exploitation victims are elderly females over age 70 who live alone. They may also suffer from one or more physical or mental impairments. Perpetrators are most often relatives of the victim, typically the adult children.

It is often argued that legalising euthanasia or assisted suicide would be a recipe for elder abuse. Given the vulnerability of many older people, who already feel themselves to be a financial, emotional or care burden on others, this is a powerful reason for not changing the law and needs to be borne in mind over the next few weeks as the pro-euthanasia lobby piles on pressure aimed at changing the law.

There are too many people already who have an interest, financial or otherwise, in an older person's death. Let's not give them any encouragement. And let's work to honour, protect and uphold the older members of our community.

Robert Wood: Wed, 20 Jun 2012 13:54
I totally agree that more should be done to protect the rights of the older people in our society. We must give due respect and honour to the elderly in whatever state they may be, physically or mentally. Do unto others as you would be done by them.
Please enable javascript to post comments!
Our Position »
Live Issues »
Scotland »
FAQs »
Get Involved »
Donate »