A picture of growing old in modern Britain that ought to make us, as a nation and as individuals, feel shame 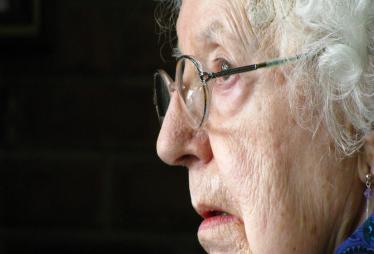 Two weeks ago a thought-provoking article appeared in the Sunday Times. Entitled "Old Age: State Care Homes are the Final Resort", it painted a picture of growing old in modern Britain that ought to make us, as a nation and as individuals, feel shame. Anyone who is able to read the article without feeling some sense of guilt is either a rare saint or just hasn't grasped what it is saying.

A A Gill's article describes growing old as "the great terror of our age". "We are terrified by the loss of youth", Gil says. "We kick against the clock, like infants trying to put off bedtime". And we have here, he tells us, something of a circular problem:

"Ageing is so frightening in part because we treat the old so badly, and we treat them badly because we're so frightened of them. We ignore them and consign them to horrible solitude because we can't face the truth that someday someone will banish us. Most people in this country die weepingly lonely - cold, starved, and left in no doubt that they have overstayed their welcome".

Gill tells of his visit, with the district nurse, to an elderly man living alone in the tower block - "this man has diabetes, a heart condition, swollen ankles, but that's not what ails him. He's old and alone". Gill continues:

"He's not uncared for; he has the tablets and the tinctures, and a string in the corner that, if pulled, will summon a man in a call centre, who will phone to ask what the matter is and, if nobody answers, will send an ambulance. We as a caring society will fend off his creeping death, insulate his awful loneliness for as long as possible. We just can't supply him with anything worth living for".

Then there's the former railwayman, a widower in a seafront flat, who sits in "a chair that seems to have grown around him like a fungus". "He had a wife. She died. He had a son and daughter. They don't see him or call. He wants to die. The loneliness, the sadness, has made living a mortal sickness".

But what about those who aren't living alone, who live in care homes? They are either sitting in groups, "none acknowledging the presence of the others" - so still alone; or being cajoled into a variety of meaningless activities. Describing one "top of the range" residential home, Gill comments:

"The place is a hamster wheel of activity, singsongs and seated exercise, all purposeless. There is nothing left to learn, nothing to be fit for, nobody to give the paintings to, no more skills needed, no new tunes and no new verses. This is merely collective time-whittling".

"Not one of the healthcare or social services personnel I spoke to", says Gill, "said they would want to end up in their own care. They all said they thought the service they offered was exceptional in its diligence, that the staff were devoted, that everything that could be done given budget, staffing, red tape, directives, etc, etc, was done. But they'd rather die at home".

This deplorable state of affairs, Gill makes abundantly clear, isn't the fault of collective benevolence, less still of the old themselves. It is each one of us who is to blame. He tells us:

"I sat next to a woman at dinner recently, who told me how wonderful her father was because he'd died so well, so quietly and quickly, ne'er a fuss. And then with a sigh: 'Now my mother, she's always complaining, miserable, I think she's scared of letting go'. It wasn't said carelessly or without a decorous jab of concern, but mostly it was with annoyance",

Gill's perceptive article ought to make us think - and, not just think, but act as well. The trouble is that what is needed isn't just more State benevolence or another reorganisation of health or social care or yet another directive. These are easy solutions. They can be put in place without too much difficulty and then left to work out their sometimes-perverse consequences like fire-and-forget missiles.

No, what is needed here is individual action. And in many ways this is much harder. It's harder because it involves doing something ourselves rather than raising our hands for someone else to do it for us. It means putting up with irritating elderly relatives, taking the trouble to visit them or to invite them into our homes - and, above all, making them feel they are valued when we are with them. And that means showing them that we think they have something to offer us, which is usually their experience. Gill comments:

"Most old people are more interesting than most young people, simply because they're older. Experience may not bring wisdom, but it does make for some cracking stories. Every old person you ignore has lived through times and done things, seen stuff that you never will, and it's worth hearing about".

He has a point. How can we possibly understand our own lives unless we see how the society in which we live has evolved? Last year a professional colleague told me that her eight-year-old son had thought that the internet had been around from time immemorial. We are in serious danger of breeding a generation that is a slave to its time - what G K Chesterton called 'the degrading slavery of being a child of one's age' - with no ability to see where the early 21st century fits into the jigsaw of history. We can't all be serious historians, but we can at least listen to those who have been around for longer than we have when they tell us what life was like years ago.

There is another, more sinister consequence of doing nothing. This marginalisation of the old, which in most cases is thoughtless rather than malicious, is feeding the demand for and increasing the dangers of legalising what is euphemistically called 'assisted dying'. Images of the elderly sitting motionless in care homes or living even more solitary lives alone are a powerful incentive for younger people to recoil with horror at the thought that they too might end up like this and to give glib responses to opinion pollsters that perhaps euthanasia should be legalised - which political campaigners then translate for us as a 'public demand' for a change in the law. And for the old themselves, feelings of marginalisation and of having nothing to contribute present one of the greatest, but often unrecognised, dangers of legalising 'assisted dying' - that elderly people will opt to take themselves off, not because it is what they want, but because they feel unloved and unvalued. We have already heard one eminent advocate of legalised euthanasia arguing that people with dementia are wasting the lives of others and should consider removing themselves as a burden. If such a state of society should ever come about, we would have only ourselves to blame when we came to be old.