... and open to being wider, says bill's author 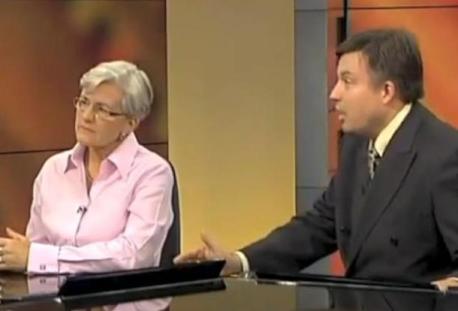 A review by Alex Schadenberg, Executive Director of the Euthanasia Prevention Coalition, from his blog. Maryan Street is currently under pressure from members of her own party to withdraw her End of Life Choice Bill which has yet to be drawn on a ballot (full draft text here). Schadenberg is pictured debating Maryan Street on NZ television.

The article reports that Street stated:

'The bill proposes euthanasia be open to people with terminal illness likely to cause death within 12 months, or to people with an irreversible physical or mental condition that renders their life unbearable - by their own assessment.'

Therefore anyone in New Zealand who has a terminal illness that may cause their death within 12 months or anyone who personally assesses that their physical or mental condition is unbearable would qualify for euthanasia.

This means that anyone with a terminal or chronic condition qualifies to be lethally injected, based on their own personal assessment, even if they have chronic depression or mental illness.

Clearly this bill will enable people to subtly pressure people with physical or mental disabilities, who are not otherwise dying, to die by lethal injection in New Zealand.

Street then is reported to state:

'Application for children with terminal illness was a bridge too far in my view at this time. That might be something that may happen in the future, but not now.'

This means that she isn't ready to propose euthanasia for children with disabilities yet, but once society begins to deem their lives to be not worth living, then she will consider it.

The Netherlands first legalised euthanasia in 2001 for competent people, it has now approved euthanasia for newborns with disabilities and people with dementia.

It is interesting that Street suggested that:

'I feel a little aggrieved when people say this bill will be the start of a slippery slope where we will just dispose of everybody who is inconvenient for society. It's not true. It is about people having the choice as to when they end their lives.'

The euthanasia lobby always sell their ideology under the guise of choice and they ignore the abuses that occur when others are given the right in law to cause death.

When euthanasia was legalised in Belgium in 2002, the euthanasia lobby also claimed that it was an issue of choice.

Yet significant abuse is occurring in Belgium. A 2010 study published in the Canadian Medical Association Journal reported that in 32% of euthanasia cases in the Flanders region of Belgium there was no evidence of request or consent. Choice is clearly absent.

Using the same data the British Medical Journal also noted that 47.2% of euthanasia cases were not even reported. When the Belgian law provides an effective immunity to doctors who 'do the paperwork' it's legitimate to wonder what's really going on there.


Street should be concerned about improving the care of everyone in New Zealand and protecting people rather than removing protections in law and giving doctors the right to kill their patients.