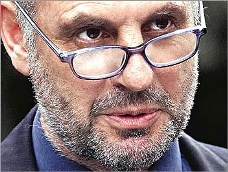 Dr Philip Nitschke ('Dr Death'), who is periodically in the news for his attempts to promote the practice of suicide, has told Time Magazine that he is thinking of forsaking his native Australia and moving to Britain. Why? Because, he says, Britain has an 'enlightened' attitude to assisted suicide!

So why does Dr Nitschke find this country so 'enlightened'? Partly it's because his native Australia is increasingly restricting his room for manouevre. 'It's getting very, very uncomfortable in Australia', he is quoted as saying. Time Magazine comments that the Australian Government 'has banned Nitschke's “Peaceful Pill” handbook, and legislation is currently passing through the [Australian] Parliament that would make it illegal to distribute information about assisted suicide via email and the internet'.

Dr Nitschke would be well advised however not to commit himself to settling in Britain just yet. Similar legislation is going through Parliament here. After a spate of recent suicides among young people in and around Bridgend which have been linked with suicide websites, the Government is taking action to protect vulnerable people by outlawing 'acts capable of encouraging or assisting suicide'. Very soon, therefore, Dr Nitschke is likely to find Britain too an 'uncomfortable' place in which to operate.

But there is almost certainly another reason why Dr Nitschke regards Britain as being (from his point of view) enlightened. He will have noted the strident campaigning that is being conducted to legalise euthanasia in this country and he may well have come to the conclusion that, if an 'assisted dying' law were to be passed here, that would provide him with a useful baseline from which to conduct his own campaigning for further extensions of the practice. For let's be clear: the difference between Nitschke and the British pro-euthanasia lobby is simply one of degree. Their agenda, like his, is based essentially on the concepts of personal autonomy and personal choice.

Dignity in Dying (formerly the Voluntary Euthanasia Society) claim to be campaigning for what their Chief Executive described to Time Magazine as 'a fully safeguarded law that protects the vulnerable and gives terminally ill adults the choice of an assisted death'. Though this is the official line, there are some worrying straws in the wind that suggest a rather wider agenda. Dignity in Dying have, for example, been lending their support to Debbie Purdy, a woman with multiple sclerosis who could not be described as remotely terminally ill in the sense in which recent 'assisted dying' bills have used the term (ie a prognosis of less than six months) but who wants the judiciary to give a guarantee of non-prosecution to her husband if at some point in the future he should assist her to go to Switzerland to commit suicide under the auspices of the suicide organisation Dignitas. One of Dignity in Dying's representatives has also been reported in the Scottish press to be helping the MSP Margo MacDonald to develop her proposals for a full-blown euthanasia law in Scotland. Mrs MacDonald's proposals are very wide-ranging indeed: they would legalise euthanasia for anyone who is terminally ill, or is suffering from a degenerative disease, or has been incapacitated through a trauma, or is not ill at all but simply “finds their life intolerable”. Dignity in Dying's representative was quoted in the Scottish press as commending the 'moral leadership' Mrs MacDonald had shown in putting forward her proposals.

Against this background the ritual condemnations of Dr Nitschke that we have heard from the UK pro-euthanasia movement have a somewhat hollow ring about them. Predictably, Dignity in Dying is making the best of a bad job by arguing that, without an 'assisted dying' law in Britain, 'activism like this [Nitschke's] is likely to continue'. And yet the autonomy-type arguments that they themselves advance for a change in the law – for example, that 'patient choice should include the right to a medically assisted death' or that 'control and choice are the foundations of a dignified death' – are exactly those that would make it difficult to restrict 'assisted death' in the way they envisage. The plain fact is that the only real difference between the UK pro-euthanasia movement and Dr Nitschke is that they are standing at the top of the slippery slope, whereas he is already some way down it.

There is only one responsible response to Dr Nitschke – to recognise where his ideas lead and to strengthen the law we have to protect the vulnerable, not weaken it and put them at risk of collateral harm.