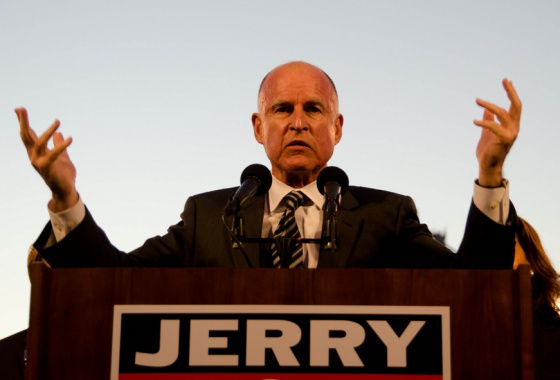 The End of Life Option Act passed California's Assembly (lower chamber) 44-35 on 9 September, and the Senate (upper chamber) 23-15 on 11 September - the same day that members of Britain's House of Commons rejected an Oregon-inspired assisted suicide bill for England & Wales 330-118. Governor Jerry Brown (pictured) signed the measure into law on 5 October, issuing a statement in which he sought to explain his decision (his options were to sign, veto or ignore and allow it to pass into effect by default). He cited the impact of hard cases like those of Brittany Maynard; Connecticut woman Maggie Karner, who lived with the same diagnosis as Maynard (brain cancer) and who died just last week, seemed to have anticipated his reasoning when she wrote:

'The out-of-state proponents of the bill regarding physician-assisted suicide suggest having the ability to end your life legally is comforting. But I can tell you from personal experience that it is nearly as troubling as the cancer itself.

'You see, I get strength and comfort from the knowledge that nobody is going to give up on me — medically, psychologically or holistically. Right now, I have the firm support of the state and my fellow citizens in my desire to live — no matter the cost or burden. If that were to change, the tiny knowledge that I might be straining my family, friends, doctors or community resources unnecessarily would be a heavy burden. The constant "option" for suicide would wear at my resolve and I fear, become an unspoken "duty" for me and others.'

The California penal code (401) states that 'Every person who deliberately aids, or advises, or encourages another to commit suicide, is guilty of a felony' - much like Britain's Suicide Act. The new law in California (which contains a sunset clause meaning that without further legislation, it would cease to have effect on 1 January 2026) states that:

'An individual who is an adult with the capacity to make medical decisions and with a terminal disease [meaning 'an incurable and irreversible disease that has been medically confirmed and will, within reasonable medical judgment, result in death within six months'] may make a request to receive a prescription for an aid-in-dying...'

Any given year will see dozens of attempts to legalise assisted suicide across the United States; only twice have state legislatures now debated and accepted such measures (California and Vermont - Oregon and Washington's laws were the result of referenda). That such a politically and culturally significant state as California should overlook the weighty evidence against such a move is grave indeed. Its 38.8m residents make up almost 12% of the USA's 318.9m population, in contrast with Washington's 7m, Oregon's 3.97m - and Vermont's 626,562. The assisted suicides reported for last year in Oregon (105) would extrapolate to around 1,024.

'This is a dark day for California and for the Brown legacy. Governor Brown was clear in his statement that this was based on his personal background. As someone of wealth and access to the world's best medical care and doctors the Governor's background is very different than that of millions of Californians living in healthcare poverty without that same access - these are the people and families potentially hurt by giving doctors the power to prescribe lethal overdoses to patients.

'At this time the coalition of organizations opposing assisted suicide is reviewing at all of its options moving forward.'

© Image copyright of Steve Rhodes and licensed for reuse under Creative Commons License 2.0