Palliative care is being used like bubble wrap around dangerous moves to legalise assisted suicide... 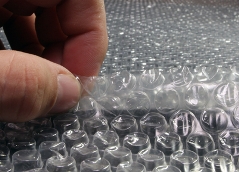 Baroness Finlay of Llandaff has sharply criticised Dignity in Dying's Charter for Dignity at the End of Life, likening it to bubble wrap. Speaking in a debate on the charter in the House of Lords, Professor Finlay - an expert in palliative care - said, 'Palliative and other end of life care is being used like bubble wrap around a sharp and dangerous object, in an attempt to introduce assisted suicide by the backdoor'.

Following the debate, the All Party Parliamentary Group on Dying Well, of which Baroness Finlay is a leading member, issued a press state(reproduced below with permission):

House of Lords hears sharp criticisms of attempt to introduce legalised euthanasia by stealth into Government plans for End of Life Care. “Dignity in Dying”, formerly the Voluntary Euthanasia Society, accused of promoting its euthanasia agenda under cover of a concern for end-of-life care. Government states that they have “no plans to change the law” relating to assisted suicide and cannot accept the recommendation contained within Dignity in Dying's 'charter' which calls for such a change. The minister said that such a measure falls outside of the scope of the Governments recently published End of Life Care Strategy.

In the House of Lords today former health minister Lord Warner asked the Government whether it would “take account of” Dignity in Dying's Charter for Dignity at the End of Life in carrying forward its End-of-Life Care Strategy. The 'charter' in question contains within its recommendations a call for parliament to legalise assisted death.

The debate, like many before it on the same issue, divided opinions amongst Peers. Though some endorsed the 'charter's' proposals, others pointed to serious defects and questioned the motives behind a document coming from an organisation which, until its re-branding in 2006, had been known as the Voluntary Euthanasia Society.

Speaking in the debate, Baroness Finlay of Llandaff (a Professor of Palliative Medicine) in describing the 'charter' said: “Palliative and other end of life care is being used like bubble wrap around a sharp and dangerous object, in an attempt to introduce assisted suicide by the backdoor.”

Lord Livsey of Talgarth, speaking from the Liberal Democrat benches, described Dignity in Dying's 'charter' as “not only redundant but wholly inappropriate.”

Baroness Emerton drew attention to the Government's own End of Life Care Strategy, which had specifically excluded from its ambit the legalisation of euthanasia. Lady Emerton described this exclusion as “a wise and statesman-line approach”. She went on to say that the authors of the 'charter' were trying to use the Department of Health's own strategy “as a mule for carrying their single-issue thinking into Government policy”.

Baroness Howe of Idlicote, picked up on the issue of legalising assisted death by warning that “it is a road along which we should not be going”.

Many of those who spoke in the debate pointed out that nine of the ten recommendations contained in the 'charter' dealt with issues which either required little or no action or could be readily achieved by administrative means. The exception was its recommendation that euthanasia (or 'assisted death') should be legalised for terminally ill people. Lord Hameed, who spoke as a member of the Muslim community, stated that men and women of all the major religions could support nine of the recommendations but “could not support the legalisation of assisted suicide.”

Summing up for the Conservatives, Lord McColl of Dulwich quoted from letters which “Dignity in Dying” had sent to its members and which made clear that the organisation's professed interest in end-of-life care was no more than a cover to bring about the legalisation of euthanasia. On behalf of the Opposition, he commended the Government for its own End-of-Life Care Strategy and hoped the exclusion of euthanasia would be maintained.

Replying to the debate on behalf of the Government, Baroness Thornton stated that the government are committed to improving end of life care for all. However Lady Thornton was deliberate to point out that, with regards to the legalisation of assisted suicide, the “Government have no plans to change the law in this area” and that they will not be “actively pursuing” a change in the law to allow assisted suicide.